How we (hopefully) learned to stop worrying and love the streetcar 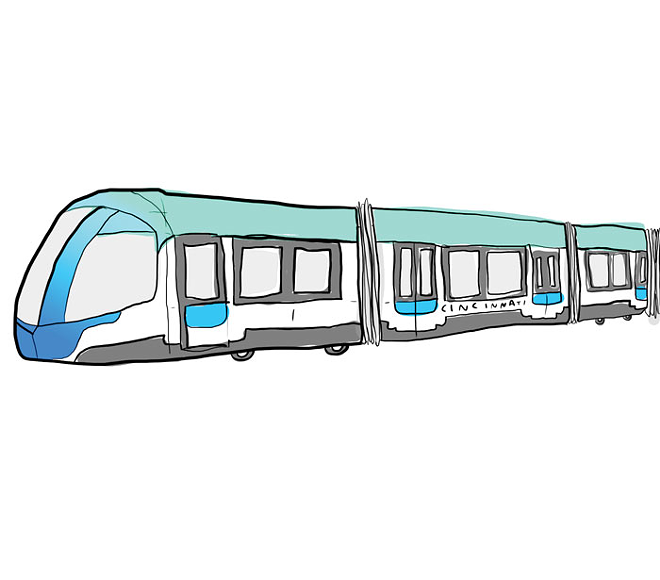 Ah, the streetcar. It’s been giving Cincinnatians of all political stripes one kind of ulcer or another since at least 2007. Now it’s finally here, and maybe someday soon we can all stop worrying about it. Before we jump on that train for the first time, however, let’s review the long and winding track that got us to this point.

The first electric streetcar begins operation in Cincinnati, and for the next 62 years, the city manages to run the cars without falling into fiscal, cultural or traffic chaos. Those were different times, eh? Before the streetcars, residents ride on cable cars, and before that, horse-drawn carts, which started operation in the late 1850s and eventually extended beyond the city’s basin with the help of the city’s five inclines. The electric streetcars run until 2 a.m. and supply more than 100 million rides a year for decades, peaking at 132 million in 1946. Compare that to Metro buses today, which provide about 25 million rides a year. At its peak, the fare to ride the cars was a princely 15 cents.

With the construction of modern highways looming, suburbanization picking up and cars becoming a fixture in the average American family, the city’s old-school streetcars make their last runs. On April 29, 1951, the city officially ends the final two streetcar lines, which run from downtown to Cheviot and Clifton. Those routes and others are replaced by trolley buses, which soldiered on until 1965 in concert with the predecessors of the modern Metro buses we know and love today.

It will take more than 50 years before city leaders begin thinking seriously about rail transit again, but at the dawn of the new millennium, some folks are feeling visionary. Enter MetroMoves, a bold plan to connect the entire Greater Cincinnati area via multi-modal transit, including a 60-mile, five-line light rail system that would have served nearly all of the city’s 52 neighborhoods. The downside? The whole thing costs $2.6 billion. That money would have to come from a half-cent county tax hike, but a decisive 68 percent of voters in 2002 say no thanks.

Recently, the idea of a region-wide transit system has come up again. That could be a heavy political lift, but we’ll get there in a minute.

Transit advocates pick plans for the streetcar in its current iteration from the ashes of Metro Moves, figuring progress via a smaller project is better than another all-or-none gambit on an overarching regional system. In July, the city commissions an independent feasibility study on the benefits of a streetcar system through downtown and Over-the-Rhine, with eventual extensions to the north, west and southeast. That report forecasts an overall three-to-one return on investment in the project, including a big increase in economic activity along the streetcar route and up to $1.4 billion in redevelopment of vacant or under-utilized buildings near the tracks. The original plan put forward by streetcar boosters includes a second section from Over-the-Rhine into Uptown, but that extension is on hold.

In April, Cincinnati City Council votes 6-2 to build the streetcar, including the Uptown extension, at an estimated cost of $128 million. The city plans to apply for federal money earmarked to help transit projects like streetcars to help with completion of the project. Among the two no votes: future Mayor John Cranley, then a city councilman. Anti-tax groups, including the Coalition Opposed to Additional Spending and Taxes, or COAST, flip their wigs and gear up in opposition to the project. Here’s where things start getting crazy politically.

The first of two ballot initiatives opposing the streetcar, Issue 9, is put forward by a seemingly unlikely coalition called “We Demand A Vote” involving COAST — which mostly represents white suburban conservatives — the city’s chapter of the NAACP and others. At the time, the civil rights organization’s local chapter is headed by once and future city council member Christopher Smitherman, a conservative and vocal opponent of the transit project. Voters reject the initiative, which would have required a public vote on any rail spending by the city, by a big 56-44 margin.

The streetcar project is awarded around $40 million in federal grants, including Urban Circulator and Transit Investment Generating Economic Recovery, or TIGER, grants. Meanwhile, in April 2011, some $52 million in federal funds are stripped from the project by a state transportation panel answering to the administration of Republican Ohio Gov. John Kasich, an outspoken opponent of streetcar projects and most public transit in general. The year before, under the administration of Democratic Gov. Ted Strickland, the same panel gave the streetcar project the highest score of any project in the state. In response to the funding cuts, streetcar backers begin to focus on so called “Phase 1-A” of the project, or the 3.6-mile loop around downtown and OTR.

The same year, a second voter referendum makes its way onto the November ballot, again advanced by COAST and the Smitherman-led NAACP. It seeks a similar bar on city spending for streetcars, but is worded more narrowly and doesn’t mention other rail-related spending. Voters once again say no to blocking the project, albeit by a narrower 52-48 margin.

The city approves a $151 million budget for the streetcar and breaks ground on the project in August, beginning three years of work. Mayor John Cranley, who ran on a staunch anti-streetcar platform, takes office in November. During a heated campaign against pro-streetcar opponent and then-Vice Mayor Roxanne Qualls, Cranley promises repeatedly to cancel the project. He nearly succeeds during his first days in office, convincing five members of Council to pause the project while the city studies how much it would cost to cancel it outright.

But then some key things happen: The federal government gives the city a deadline by which to decide whether to keep going with the project or pay back its federal grants; it becomes clear that cancelling the project would cost some $80 million; and philanthropic nonprofit the Carol Ann and Ralph V. Haile/U.S. Bank Foundation pledges $900,000 a year for a decade to run the streetcar. Support from previous streetcar opponents on Council tips a Dec. 19 vote to resume the streetcar to a veto-proof 6-3 majority just hours before the Fed’s time limit runs out.

Of course, the dramatic last-minute vote doesn’t end the fighting. A political pattern is set for the next two years: Cranley and a minority of council members, including Christopher Smitherman, Amy Murray and Charlie Winburn, continue to oppose the streetcar, raising questions about whether the city has money for it, pushing against using money from the city’s general fund budget and generally nay-saying the enterprise. Meanwhile, council members find ways to scrape the money together to keep the project solvent on paper. Sponsorships and marketing opportunities are created to help pay for operating costs, as is a parking meter cost boost in downtown and OTR that will fill the project’s operating coffers.

With continued, though reduced, political wrangling, Council sets the streetcar’s operating hours and fare structure. Cranley threatens to try to reduce the hours the streetcar will operate instead of dipping into the city’s general fund if money for the project comes up short, though there are questions about whether the nature of the city’s federal grants will allow that. All five of the streetcars, built by Spanish firm CAF, arrive in Cincinnati and begin gliding around the streets on test runs, though some cars do arrive behind schedule. The city sets the transit project’s opening day for Sept. 9. In August, the city announces the project is on schedule and $2.5 million under budget thanks to construction savings. Cincinnati Bell announces it will spend $3.4 million to sponsor the streetcar, naming it the Cincinnati Bell Connector.

Meanwhile, a new mayoral race brews. Councilwoman Yvette Simpson, who ran in 2013 as a pro-streetcar candidate, says she’s hoping to move beyond that project toward a bigger picture, more inclusive MetroMoves-style regional transit effort. That long-term effort could come with a big price tag and is sure to inflame transit-phobic conservatives. Is Cincinnati’s next big rail fight starting up? We’ll see.