The new series follows a young suburban woman, missing for seven years, as she emerges from a hospital after jumping off a bridge. 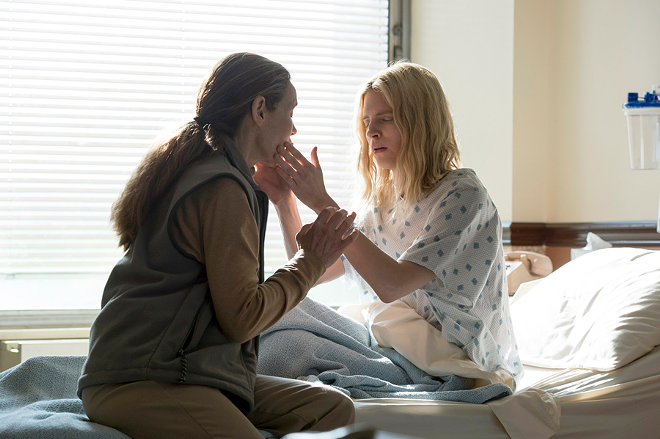 Photo: Jojo Whilden / Netflix
Alice Krige (left) and Brit Marling in The OA
On the heels of the wildly popular sci-fi mystery Stranger Things comes another dark and fantastical Netflix original. In the vein of a surprise Beyoncé album, The OA (Netflix) debuted last month with little promotion. And for fans of filmmaking duo Zal Batmanglij and Brit Marling, the new series was just as intriguing as new music from Queen Bey.

The OA follows Prairie Johnson (Marling), a young suburban woman who has been missing for seven years, as she emerges from a hospital after jumping off a bridge in New York. Blind at the time of her disappearance, she can now miraculously see. And instead of her given name Prairie, she refers to herself as “the OA.”

Emotionally and physically scarred, Prairie has clearly been through trauma and is reluctant to disclose any details to doctors, the FBI or her devoted parents, who’ve been searching for her for years. But eventually she confides in an odd group of neighborhood misfits.

This is the most simplistic, spoiler-free description of a very complex supernatural mystery that explores the impact of near-death experiences. As viewers, we receive an almost omniscient look at Prairie’s mysterious journey that few in her life truly understand. But can we trust her?

Like Batmanglij’s and Marling’s 2011 film Sound of My Voice, The OA tests not only the other characters’ belief in the protagonist (in both cases, Marling), but also the viewer’s trust in the narrative. In Sound of My Voice, Marling portrays a cult leader who claims to have traveled from the future. In The OA, her character asserts that she’s traveled from some kind of great beyond.

As Prairie recounts her incredible experiences to four high school boys and a teacher, it’s easy for us to get sucked in. But eventually we are all forced to question whether Prairie is authentic. Is she some kind of angel, proof of an afterlife or other dimensions, or does she represent something more sinister? Is she merely a victim of abuse and mental illness?

While clear answers are not on the menu here, viewers are treated to excellent performances by Marling and a cast of young newcomers, visually astounding scenes of interstellar dimensions and a story that begs for fan theories — all making for perfect winter binging material.

Workaholics (Season Premiere, 10 p.m. Wednesday, Comedy Central) – Kicking off the seventh and final season, Adam, Blake and Ders take on a group of trainees in an effort to clinch the distinction of best office pranksters.

This Is Us (9 p.m. Tuesday, NBC) – A standalone flashback episode gives us a closer look at the day the Big Three came to be, delving into the personal lives of Joe, the firefighter who brought Randall to the hospital, and Dr. K, who copes with the death of his wife.