The newest venture into the Harry Potter universe takes place 70 years before the setting of the book series and revolves around magizoologist Newt Scamander. 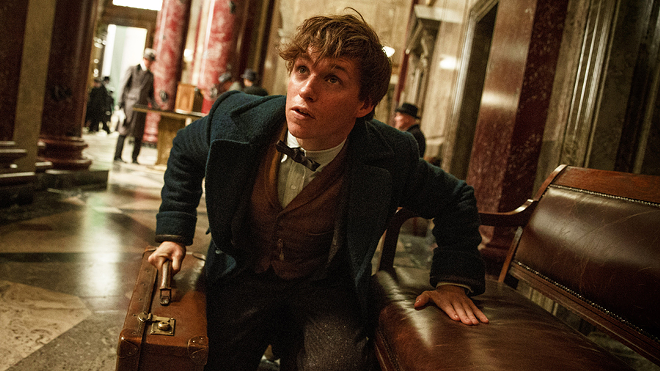 Photo: Jaap Buitendik / Courtesy of Warner Bros.
Eddie Redmayne plays Newt Scamander in this backstory.
Just when you thought that films based on the “wizarding world” of Harry Potter were over, here comes a new one: Fantastic Beasts and Where to Find Them. It opens Friday, but where did it come from, exactly? And will it be accepted as a legitimate furthering of the Harry Potter legacy?

Casual fans of the super-successful Harry Potter movies might be unsure about it, but droves of diehard Potter-heads will be interested because it provides a canonic backstory and comes from a script written by Harry Potter’s creator, J.K. Rowling. It is directed by David Yates, who helmed the last four Harry Potter films.

The film’s title is taken from an encyclopedic textbook that is referenced several times by Harry, Ron and Hermione in the original Harry Potter books and films. Rowling subsequently wrote a real version of the textbook in 2001 as an accompaniment to her Harry Potter novels. It reads like an actual encyclopedia, with only smatterings of character or storytelling.

So this is the first of the wizarding films to be released without a traditional novel that fans can read before viewing, although the script will be released in book form the same day the film premieres.

This is a Harry Potter film that might be considered American, despite the fact that leading man and Oscar winner Eddie Redmayne is British — he plays magizoologist Newt Scamander. Fantastic Beasts and Where to Find Them takes place in New York City in 1926, unlike the eight original films, released between 2001 and 2011, which are firmly planted in the United Kingdom.

Fantastic Beasts is more a Harry Potter spin-off than a continuation. The movie’s official website describes the story this way, in part: “Something mysterious is leaving a path of destruction in the streets, threatening to expose the wizarding community to the Second Salemers, a fanatical faction of No-Majs (American for Muggles) bent on eradicating them. And the powerful, dark wizard Gellert Grindelwald, after wreaking havoc in Europe, has slipped away and is nowhere to be found.

“Unaware of the rising tensions, Newt arrives in (New York City) nearing the end of a global excursion to research and rescue magical creatures, some of which are safeguarded in the hidden dimensions of his deceptively nondescript leather case. But potential disaster strikes when unsuspecting No-Maj Jacob Kowalski (Dan Fogler) inadvertently lets some of Newt’s beasts loose in a city already on edge.”

This film comes just a few months after the stage play Harry Potter and the Cursed Child opened in London. Written by Jack Thorne from a new story by Rowling, Thorne and John Tiffany, it introduces a generation of witches and wizards who are growing up 20 years after the climactic battle depicted in Harry Potter and the Deathly Hallows.

The very busy Rowling has also shown a desire, as a novelist, to tell more mature stories. Her recent A Casual Vacancy is about political intrigue in an English village. As Wikipedia summarizes it, “Major themes in the novel are class, politics and social issues such as drugs, prostitution and rape.”

When Harry Potter films were preceded by books, there was plenty of time for the readers to familiarize themselves with the intricacies of the characters, memorize the major plot points and, overall, gain an appreciation for the author’s work. They could compare and contrast the books with the films, which created a very large community of fans who generated buzz.

Fantastic Beasts runs the risk of overwhelming audiences with too many unfamiliar characters. Rowling doesn’t seem too worried, though — she recently announced the Fantastic Beasts series would span five movies. And should Cursed Child also come to film, its stories could conflict with Fantastic Beast’s pre-Potter setting. So far, Cursed Child has had a lesser effect on pop culture for a Harry Potter product, although it has yet to arrive onstage in the U.S.

True fans of Harry Potter are sure to appreciate what’s being offered by director Yates and writer Rowling in Fantastic Beasts. Whether or not it matches the earlier successes, it’s always nice for devotees to have a reason to dust off their wands for a night at the movies. (Opens Friday at area theaters) (PG-13) Not screened for review