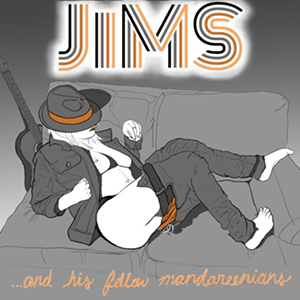 Jimmy “Jims” Snowden’s debut EP under the JIMS project name, Mandarin, was a test for the Greater Cincinnati music scene stalwart. Stepping away from the chaotic rhythms of his band projects, Snowden assembled a suite of five solo tracks that ran the gamut from experimental Post Punk to Indie Pop with acoustic guitars, looped instrumentation and his own breathy, soulful voice doing the majority of the work.

Not one to relax, Snowden is back after only four months and he’s brought a few friends along for the first full-length under the JIMS moniker, aptly titled …And His Fellow Mandareenians. On this go-round, Snowden is joined by Adam “Brother” Weeden on bass and backing vocals and Aaron “The Sarbest” Sarbeck on guitar and keys. Snowden keeps up his eclectic contributions with his vocals, guitar, drums, percussion and keyboard.

The trio assembled eight tracks that harken back to Mandarin, but logically expand on what Snowden was able to accomplish on his own. Some of the more ambitious aspects of the EP have been dialed back in exchange for a more consistent, well-rounded presentation. Now that Snowden isn’t performing everything on the album, the songs sound more organic, with the layers melding together rather than sounding separate. On Mandarin, the separation gave each instrument its own time to stand out, but the new album ditches that trope and the songs are more cohesive and natural because of it. The addition of extra vocal registers furthers the depth and gives Snowden even more to build and iterate on.

The extra tools — and a longer runtime for which to utilize them — has allowed Snowden and company to assemble a package that melds together as one complete product, while still avoiding becoming stale, as many stripped down Indie bands are wont to do. One only has to listen to the one-two punch of “Bohemian Mandareenian” and “This Hour” to hear just how far the Mandareenians reached to pluck influences off various musical branches. “Bohemian Mandareenian” comes with a Spanish guitar rhythm peppered throughout and Snowden at his most emotive and passionate. “The Hour” quickly follows and, while the song falls into a more traditional Indie Rock framework, the splashy percussion keeps the emotions that were brought up by “Bohemian Mandareenian” at a steady, heart-pounding level. The song is both hopeful and painful, with the infectious guitars precisely at odds with Snowden’s pained, thoughtful delivery.

Ironically, …And His Fellow Mandareenians exemplifies the growth of the JIMS sound through a reworking of a track found on Mandarin. “Alone, Alone, Alone” begins much as it does on the EP, but it quickly grows in scope and complexity via the addition of small but deliberate flourishes throughout the track. The guitars and bass have more oomph, the percussion is fuller and a mid-track instrumental break gives the song a very welcome veer off familiar territory, before coming back and wrapping it up in a neat, satisfying package.

Ultimately, the turnaround time between Mandarin and …And His Fellow Mandareenians makes perfect sense once the two albums are compared — the creative process between the two of them can be drawn as a straight, upward line. The work Snowden started on his EP has been carried and improved upon by him and his bandmates on the LP, perhaps losing some of the EP’s breadth, but replacing it with more depth. It is this change that gives the new JIMS album so much staying power and makes it a worthy next step in the band’s journey.