These Asian grocery stores offer an opportunity to celebrate community and culture. If you haven’t been, plan a visit, ask questions while you shop and introduce new culinary flavors to your kitchen.

Food can be a window into another culture, shedding light on unique traditions and flavors. And Cincinnati’s specialty international markets facilitate that experience with everyday access to ingredients, information and products. Here, we’re going to focus specifically on Asian markets.

One of the first Asian grocery stores in Cincinnati was Saigon Market (119 W. Elder St., Over-the-Rhine). Beyond the red exterior at the Findlay Market storefront are tall shelves holding products from Vietnam, Thailand, China and more. The parents of the store’s current owner, Nghiep Ho, immigrated from Vietnam in 1976 and started their business the same year.

“They were a couple of hardworking people that started from literally nothing,” says Ho.

Today, Saigon Market has been joined by other Asia-focused stores across the Tri-State, including CAM International Market, Sakura Mart, Jagdeep’s Indian Market, Burmese Market and more, which hold products both familiar and non for a variety of shoppers.

Dr. Mikiko Hirayama, the Director of Asian Studies at the University of Cincinnati, has seen an increasing interest in non-Western cuisines in the past 10 to 15 years. She recalls going abroad one year, then returning to find that Cincinnati-area Kroger stores now carried sushi.

“That was a game changer,” she says. “Since then, I think the interests and demands have been gaining steadily.”

Along with groceries that specialize in Asian ingredients, Hirayama also sees the importance of places like Jungle Jim’s.

“(Seeing) those products from all over the world kind of demystifies Asian cultures and other non-American cultures,” she says.

At certain times of the year — such as the Mid-Autumn Festival in September — Jungle Jim’s and Asian grocers may carry special items like lanterns or moon cakes, a pastry that is gifted among friends and family.

“Those products with cultural meanings will give people from other backgrounds a new perspective about what Asian culture is,” says Feng Liang, a Chinese language professor at UC.

But visiting these specialty stores has an even greater effect on Asian-Americans who wish to explore their cultural identity or may be looking for a piece of home. While interviewing Chinese heritage language learners for his dissertation, Lang noticed a trend — he found that some of his students went to stores like CAM International Market to shop and practice their language skills.

“One participant mentioned that he tried to use Chinese to communicate with the shopkeeper. (These experiences) are very important to them,” Liang says. The first CAM International Market opened in 1997. Today, there are three locations: a local shop at 10400 Reading Road in Evendale, one in Columbus and one in Cleveland. Arguably the largest Asian grocery store in the Tri-State, you could spend hours navigating the shelves. Along with snacks, canned goods and noodle and rice varieties, CAM stocks baked goods, produce and fresh meat and seafood.

Kirsten Liu, a marketing assistant at CAM, says that the area surrounding the store has a more saturated Asian population.

“They like to buy some Asian special ingredients. They like to enjoy the food and cook for themselves,” Liu says.

Along with Asian-Americans, Liu also interacts with people who worked in Asian countries, returned to Cincinnati and are now looking for the ingredients they fell in love with while abroad.

Local colleges like Xavier University and UC are home to many international students, including those from Asian countries. These students make up nearly 8 percent of UC’s student population, according to the university’s 2018-2019 enrollment data. Liang says these Asian grocery stores help the students make a more gradual transition from their home country to the U.S. 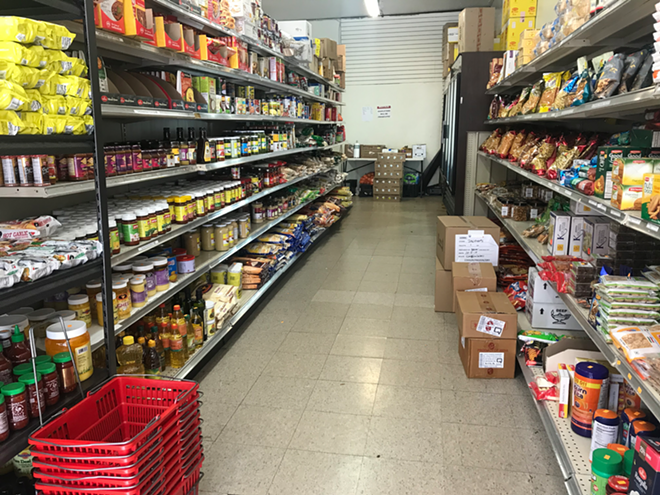 In fact, Jagdeep’s Indian Grocery (270 Ludlow Ave., Clifton) in the Gaslight District has a shout out in UC International’s Cultural Handbook for international employees, scholars and students. While the store does receive some business from Americans, they largely serve international students, according to Kalvinder Kaur, whose husband’s family owns the store. They have popular spices like turmeric, garam masala and chili powder, along with rice, flour and organic foods.

“(The students) make everything from scratch. Half are vegetarian, and we cater to vegetarians here,” Kaur says. “If (the students) moved out on their own due to school or they just moved out because they’ve grown up, they can make their own food, you know? Keep their link with their culture, their roots.”

When experiencing Asian cuisine, immersing yourself in the traditions and philosophies associated with it is just as satisfying as the meals themselves. Each of the 48 countries that make up Asia has its own perspective on what should be eaten, and when and how.

“You’re supposed to eat what’s seasonal, because seasonal food has nutritional benefits that you need in that particular season,” Liang says.

According to Chinese Medicine Living, winter heavily represents Yin, which is associated with a dark, cold and inward energy. So, warming foods like soup and in-season ingredients like squash are your go-to.

The traditional cuisine of Japan, known as washoku, likewise puts an emphasis on seasonality, but it also urges the diner to unpack the layers of a dish.

“We say in Japan that you eat with your eyes, your ears — all five senses. It’s not just about the taste,” says UC’s Hirayama.

Western-style restaurants may use classic round plates and pile on food, leaving very little empty space. Traditional Japanese meals are artfully arranged. Asymmetry, contrast of taste and color, and empty space are utilized to create a meal that is not only delicious, but also captivating to the eye. These practices are a source of great pride to the cook, according to Hirayama.

Cincinnati is a community with an increasing eagerness to learn about and celebrate the cultures of its neighbors. These Asian grocery stores offer an opportunity to do just that. If you haven’t been, plan a visit, ask questions while you shop and introduce new culinary flavors to your kitchen.