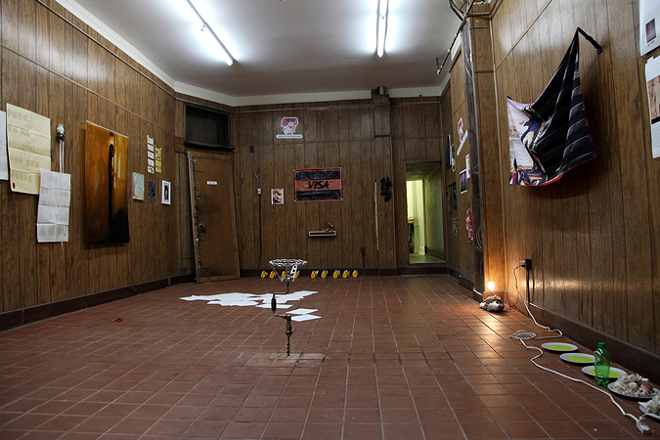 Companion Pieces is the first exhibition put on by the curatorial duo of Lydia Rosenberg and Rebecca Steele — known as Anytime Dept. — at their new location in Camp Washington. It’s also the first group show the two have curated as a team.

It’s loosely themed, featuring 49 artists (10 of whom are local and many of whom are internationally based and recognized) and 46 artworks. Participants hail from Chile and Brazil, for instance. Rosenberg says this group show is a departure from their typical approach thus far, when they were based in Northside and mostly put on two-person exhibits. She explains they wanted “a humongous group show that should include anybody we’ve ever worked with or anybody we ever wanted to work with.”

They were also interested in walking the line between nepotism and building community. “Our main thing has really been to work with people whose work we know and want to support, because we’re artists first and foremost and curators and organizers second,” she says.

To that aim, they put a call out to all the artists they’ve shown in the less than a year they’ve been in operation, and asked them to participate, as well as suggest someone else for inclusion in the show.

The result is, according to Rosenberg, “a weird mix of artists.”

“I don’t know what the connecting thread would be, except that I think there’s something thoughtful and maybe a bit funny in all of the work — not that it doesn’t get to deep places,” she says.

Trammel also replaced the original messages on the stickers with contemporary words and phrases like “NOT YR THERAPIST” (aptly placed directly above Mack McFarland’s and Mark Stockton’s twin portraits of a crying Mike Pence), and “WHATEVER FOREVER.” Both feel oh-so-relevant as a recasting of female agency.

Conceptual artist and sculptor Llewelynn Fletcher invited digital multi-media artist Sarah Long as her plus-one, but the latter’s work also visually relates to the art of the sculptor and painter Edward Victor Sanchez. Both display a radial center with similar color palettes. That’s the kind of connection Rosenberg says was fun to make during the installation process.

One of Anytime’s interns, recent Art Academy of Cincinnati graduate Brandon Benitez, had the idea to cover an exposed pipe where the wood paneling was falling off with clear Plexiglass. “We’re calling that a permanent/semi-permanent installation,” Rosenberg says.

There is work on display everywhere, and with no titles or curatorial statement supplied for guests to read, it is easy to miss something. But, Rosenberg attests, this is a purposeful method.

“We try to give a sense in the press release about what the organizing ideas are, and then we’re hoping that by not putting up a lot of wall text that there’ll be a need for human interaction or human questioning,” she says.

“I think a lot of information can be a burden for a viewer,” she continues. “It (lets) them walk away being able to say what they saw, but without really feeling like they had their own feelings and ideas of what they were looking at.

“Everything’s up for adjustment, but we want to lead with the visual as much as possible.”