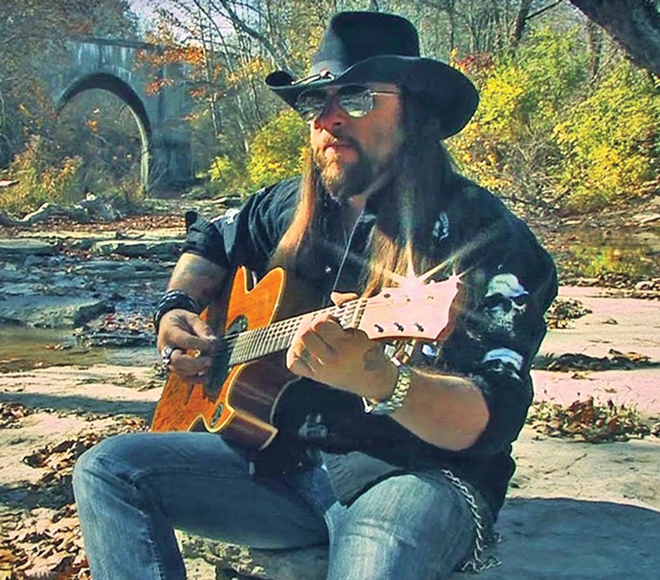 Veteran Greater Cincinnati “Outlaw Country/Ameripolitan” singer/songwriter Dallas Moore is one of the busiest musicians in the area, playing shows almost every night of the week, whether around Southwestern Ohio or on tour across the country. But Moore has a performance coming up that even his most hardcore fans won’t be able to attend. That is, unless they get arrested in Kentucky’s Bullitt County in the next few days.

This Monday, Moore will travel to the Bullitt County Detention Center, located in Shepherdsville, Ky., about 20 miles south of Louisville, Ky., to perform an acoustic set for inmates. He will also be recording the performance for a live album, which will be released on the locally based Sol Records, which has put out Moore’s last several albums as well as recordings by area bands like Ridge Runner and Pure Grain.

The clear precursor to a recording of this type is At Folsom Prison, the album Johnny Cash recorded in the late ’60s at a notorious detention facility in California. Released on Columbia Records in 1968, the album helped revive Cash’s career and is considered an indisputable classic, regardless of genre (Rolling Stone ranked it No. 88 on its “500 Greatest Albums of All Time” list and No. 3 on its “50 Greatest Live Albums of All Time” list).

The connection to Cash’s Folsom album is clearly not lost on Moore. In fact, he has enlisted Bill Halverson, who assisted in the engineering of At Folsom Prison, to be an executive producer of the album, which Moore says is tentatively titled Six Strings And Steel Bars: Dallas Moore Live From The Bullitt County Jail. After recording with Cash, Halverson went on to have a remarkable career as an engineer and producer. Early in his career, Halverson was also an engineer on the live half of Cream’s platinum-selling 1968 double album, Wheels of Fire (another album on Rolling Stone’s 500-best list), and he would go on to work on records by Crosby, Still and Nash, Eric Clapton, Bill Withers, Bad Company and many others. Halverson moved to Cincinnati in the late ’70s and began his long tenure as a guest lecturer at the Recording Workshop in Chillicothe, Ohio. He moved to Nashville in the mid-’80s, but maintains strong ties to the area — besides working with Moore, Halverson co-produced Pure Grain’s Indiana Sun in 2014, and he also does work at downtown’s Fox Sound Studios.

For information about Moore’s album release, keep an eye on dallasmoore.com and solrecords.com.

• Heavy Cincinnati Rock crew Electric Citizen is back home after spending six weeks in Europe opening for Wolfmother. Higher Time, the foursome’s second album for the RidingEasy label, came out May 13, so the band is getting right back to work and hosting a free hometown release show this Saturday at Northside Tavern (4163 Hamilton Ave., Northside, northsidetav.com). After an opening set by Philly’s Ruby the Hatchet, Electric Citizen will play Higher Time in its entirety (as well as some of its other songs). The show starts at 10 p.m.

Check out CityBeat’s May 4 interview with Electric Citizen’s Ross and Laura Dolan, and also visit electriccitizenband.com for more on the group.

• Several local musicians are teaming up Sunday for an all-day benefit to assist one of their peers. Veteran guitarist Pete Snow was diagnosed with primary progressive multiple sclerosis, a painful condition that requires regular (and expensive) treatment and gradually worsens over time. Among his many musical activities, Snow has been a member of bands like Conrail Saints and Laidlaw Union, as well as No Saints No Saviors, an Allman Brothers tribute group that featured local all-stars like Sonny Moorman and Bob Nave.

Sunday’s benefit goes from 1 p.m.-1 a.m. at The Rusty Nail (339 Center St., Miamiville, Ohio, facebook.com/therustynailmiamiville). Artists scheduled to appear include Sonny Moorman, Todd Hepburn, Dallas Moore, Wendy Lee Oakley, Cheryl Renée and many others. Donations for Snow will be accepted at the event. There is also a GoFundMe site at gofundme.com/shzezms4 for those who would like to help.