Slated for a summer release, 'Gehenna Gate' is poised to push both the band's artistic boundaries and its impact on the local Metal scene. 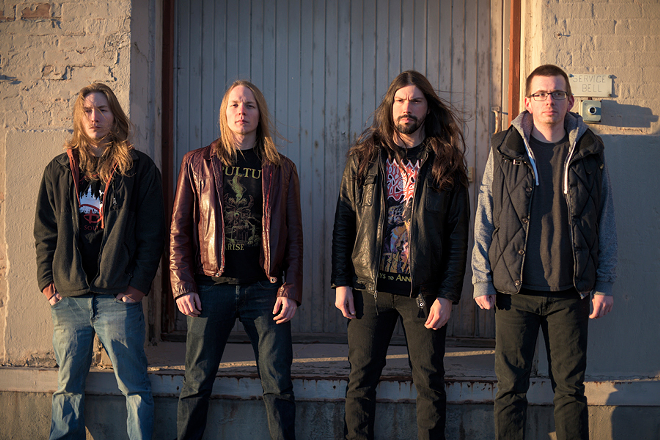 Photo: Hailey Bollinger
Gehenna Gate, Lucis Absentia’s follow-up to 2013’s To the Depths EP, is due this summer.
If there were any justice in this world, the members of Lucis Absentia would’ve shown up to our interview drunk and/or hungover, with the stench of cheap beer, cheaper pizza and cigarettes still hanging from their all-denim outfits. Or, better yet, not shown up at all because they were too busy raging at their trashed practice space like the Thrash forefathers of old.

But, alas, that was not to be. Instead of conducting this interview in a poster-adorned practice space, the meeting was held in a quiet Applebee’s to ensure the recorder didn’t have any issue picking up their inside voices. Instead of cases of PBR, Colton Deem (guitars/vocals) and Mitch Pegg (guitar) enjoyed a sensible lager and basket of mozzarella sticks. And in perhaps the biggest affront to the Metal gods, the boys were not just on time, they were early.

While it’s true that the band doesn’t tick off too many Thrash Metal image boxes, all you have to do is spin the 2013 EP, To the Depths (which was re-released last year on Static Tension Records) or catch a live show to hear Lucis Absentia’s new material to realize that, thankfully, looks can be quite deceiving.

To the Depths packs a ton of Thrash into its trim 29-minute runtime. The songs hit fast and furious with little breathing room, leaving the listener gasping for air under the weight of the dual guitar dueling, Pegg’s massive double bass and Deem’s throaty snarl. But nestled amid the chaos are the beginnings of expansion into the more expressive subgenres found on Lucis Absentia’s forthcoming full-length, Gehenna Gate, currently slated for a summer release.

Pegg’s and Deem’s road to the lofty heights of a chain restaurant’s choicest of tables began back in grade school when Pegg and his brother Cody (Lucis Absentia’s drummer) started their first bands. Originally from Missouri, the Pegg brothers and Deem played in several bands together with several different styles prior to moving to the Queen City in 2011.

The first iteration was called Haunting Kensington. “I’ll take credit for that. Terrible name,” Pegg says. They then transitioned into Metalcore with new band The Harrowing before scrapping everything and starting fresh in Cincinnati with what was originally known as Gomorrah before becoming Lucis Absentia.

The transition from their high school Metalcore influences to today’s mix of Thrash speed, Death Metal brutality and Progressive intricacy was a natural one, primarily born from the members’ increased exposure to new and varied forms of Metal and also from moving to a new town, not knowing a soul and practicing relentlessly.

After cycling through multiple bass players, they landed on current bassist Nick Holderbaum six months ago. (“It only took two years of begging,” Holderbaum jokes.)

“When we wrote To the Depths, we were all into the Thrash bands,” Pegg says. “We just started listening to Sepultura and all the Bay Area Thrash bands and newer bands like Sylosis, who are actually a fairly big influence on us as players, and they’re all balls to the wall for the most part.

“Then we started listening to all these other bands and realizing that we don’t have to play fast all the time,” he continues. “I think we were trying to push our boundaries, technically, on To the Depths. We were trying to prove that we could play aggressively and that was the mission. Then when we started writing these new songs it was like, ‘There’s all these other cool elements that we could incorporate that wouldn’t destroy us, because you don’t have to write as technical as possible to write a good song,’ and I think before we weren’t as aware of that.”

While To the Depths was rooted in bands like Cannibal Corpse, Trivium, As I Lay Dying and Death, Gehenna Gate takes its cues from acts that Deem discovered as he began to dig further into Metal’s less BPM-focused genres.

“I like a lot of Opeth, Mastodon — progressive things like that,” Deem says. “So we’ve taken a decent amount of influence when it comes to the structuring of songs, trying to do things that we’re not necessarily comfortable with, things we attempted on the EP that we wanted to expand on even more. The songs take you on a journey: there’s ups and downs; there’s a climax. I’m trying to do that with our stuff because that’s what I enjoy. Honestly, if it wasn’t for Cody, I’d be playing pretty stuff all the time. He keeps us heavy.”

Fans of To the Depths needn’t worry that Lucis Absentia has lost its Thrash edge. The members have just developed their skills to include other genres that intensify the speed metal base they’ve built. The song “Phantom Sun,” for example, weaves Doom-like drone interludes into the main riff, which loops and layers in on itself through the majority of the track. None of Lucis Absentia’s intensity is lost; the different approach propels the strength of the central riff by giving it room to evolve via breaks in the sonic narrative.

In many ways, Lucis Absentia’s stylistic shifts are an archetypal road map for young bands. With the average age of the members hovering around the mid-20s, it’s easy to see how the quartet transitioned from aping its high school idols to adopting a focus on Thrash’s speed and technicality to finally realizing the value in slowing down and letting the songs take root in more than one style. While To the Depths is a lean and mean chunk of Metal,Gehenna Gate is poised to push both Lucis Absentia’s artistic boundaries and its impact on the local Metal scene.

It is this growth that even the Thrash forefathers would be proud of… as long as they weren’t passed out in the tour van already.