There's vanilla and chocolate, but also cardamom, lavender and even dirty martini

With a mission “to continue sweetening life in urban Cincinnati” the Harkins family — Rhett, Jennifer and their two children — and the Grear family — Andy, Kait and their five children — united to open The Bold Face Dairy Bar, a whippy-dip-style walk-up window in East Price Hill, situated in the building adjoining the newly relocated BLOC Coffee Company and catty-corner to the Incline Public House.

Rhett Harkins and Andy Grear, longtime friends and business owners of a remodeling company, wanted to open Bold Face for a straightforward reason.

“We were thinking we love ice cream and there’s no ice cream in the neighborhood, so we wanted to bring it in,” Harkins says.

Simple enough. But the thought behind the curation of their menu and intention behind every business decision — from their all-local staff to the historic renovation of their 120-year-old building to their outdoor lawn seating that encourages community engagement — is far more thoughtful than just filling a geographic creamy whip void.

Before General Rees E. Price purchased and developed the area now known as Price Hill, it was Boldface Hill, named after Chief Boldface of the Miami tribe. The Bold Face Dairy Bar is both a historical nod to the region’s beginnings and an attempt to pay homage to the importance of the area’s Native American history, Harkins says.

As for the product, their creamy whip is also creamier than most (no, really, it is).

The creaminess of any ice cream or soft serve is determined by its percentage of fat content, a crucial element of the dessert’s ability to absorb and deliver other flavors. 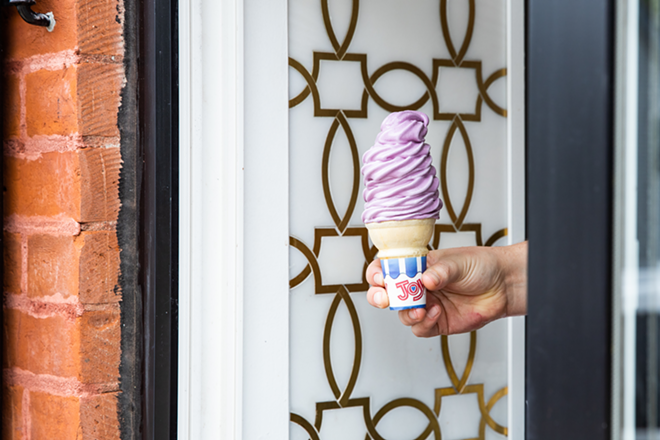 As of now, they have only one piece of equipment on-site making chocolate, vanilla and swirl soft serve. For the rest of their whip menu, which includes elevated and epicurean flavors ranging from apple cinnamon and pistachio to cardamom, coffee and mint, they’ve partnered with regional Midwest distributors, like a flavor-producing company in Illinois that makes all-natural additives and a beer syrup company in Louisville that helps make their bourbon barrel stout soft serve.

They’ve also invested in machinery that blends the natural flavors into the ice cream, which integrates the flavors all the way through, not just placing a coating at the top. Their strawberry soft serve is colored with beet juice extract and their lavender soft serve contains purple carrot extract.

“In soft serve, the tradition is so rich, but the bar for quality is somewhat low,” Harkins says. “It was an accessible product and fun and easy to figure out how to put an artisan spin on something that’s usually not.”

One of their seasonal specials has been a Dirty Martini “which is weirdly good,” Harkins says. They take vanilla soft serve and mix it with a gin reduction, a half ounce of olive brine and serve it in a martini glass with three olives on a toothpick.

For those looking for a more traditional ice cream pairing, The Bold Face Cone is quickly becoming a crowd favorite. Served in a waffle cone lined with caramel syrup, this indulgent treat is filled halfway with creamy whip, loaded with a pocket of chocolate sauce, then filled the rest of the way with creamy whip and topped with chocolate sprinkles, mini chocolate chips and draped in real 24k gold leaf. It costs $12.

But Bold Face is about much more than ice cream; it’s about community. 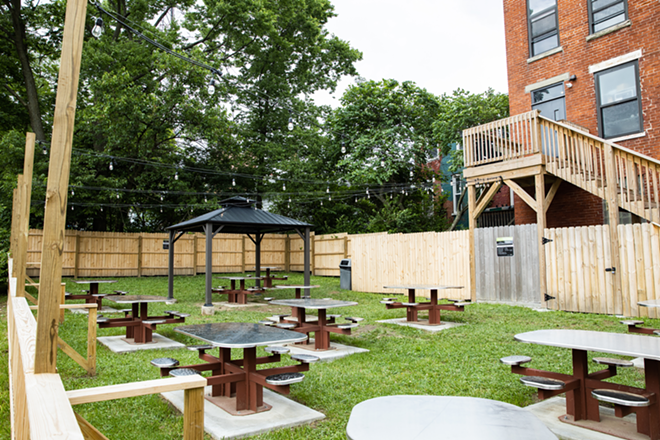 “We very intentionally have a baby cone on the menu that’s one dollar, just so a kid in the neighborhood can walk up and say, ‘I have this many,’” Harkins says.

It hopefully makes Bold Face’s offerings accessible to everyone.

After moving to Price Hill in 2007, Harkins worked coffee retail for eight years as an operator at BLOC Coffee Company from 2009 to 2015. He was drawn to living in Price Hill “for many reasons,” he says, but primarily for its unique and rich diversity, including its large Guatemalan and Appalachian populations. Partnering with their neighbors, BLOC Coffee Company, Bold Face has created lawn seating to have a safe and clean space outside where neighbors and families in the community can gather.

“We wanted a business that could organically bring people together. I thought everybody loved coffee, which is why I initially got into coffee — to connect people — but I think people love ice cream more,” Harkins says.