Never a dull moment in this revival of Tennessee Williams' 1955 play, an American classic. 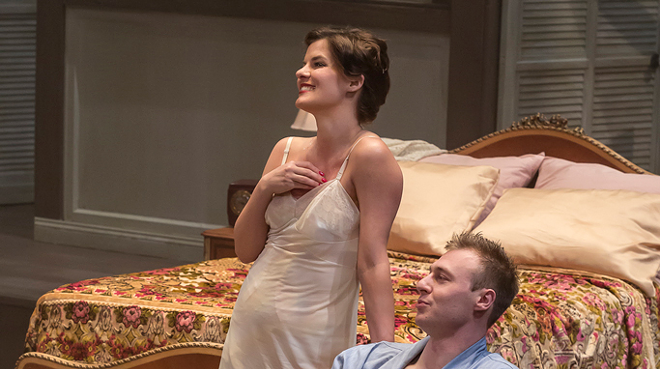 Emotionally powerful from beginning to end, the Cincinnati Shakespeare Company’s current production of Tennessee Williams’ Cat on a Hot Tin Roof explores socially progressive themes and complicated family relationships over the course of one evening.

Cat, which won a Pulitzer Prize for Drama in 1955, is set during the course of a family gathering on a large plantation home in the Mississippi Delta of the era. It exists in one continuous scene; the entire action unfolds inside the bedroom of central characters Brick (Grant Niezgodski) and Maggie (Maggie Lou Rader) on the evening of a family celebration of the 65th birthday of Big Daddy Pollitt (Jim Hopkins), the patriarch of the family and Brick’s father. Big Daddy has just gotten an alleged clean bill of health.

The success of Big Daddy’s plantation naturally sparks controversy and competition among the family members, who spend the play vying for his favoritism, which they hope will lead to control of the family fortune. And they have reason to pursue that goal with urgency — they know what Big Daddy doesn’t, that he’s dying of cancer.

Over the course of the evening, each character builds up and tears down the intertwined webs of deceit that they have created out of greed, jealousy and desperation.

Strong and sultry Maggie opens the play in the middle of a conversation with her husband, Brick. Maggie, who escaped a life of poverty after her marriage to Brick, is desperate to maintain her newfound financial security, as well as her own husband’s affection. Often referred to by her nickname, “Maggie the Cat,” she skillfully and determinedly slinks around the issue of her husband’s drinking problem as she also attempts to maintain Big Daddy’s partiality toward her.

This becomes increasingly difficult, as she later discovers the entire family knows of Brick’s refusal to sleep with her and the subsequent strain it has placed on their marriage. Under the increased pressure of this discovery, and with Brick’s escalating struggle with alcoholism, Maggie spends the play desperately clawing at their chances for inheritance, while Brick descends into a drunken despondence.

But Maggie isn’t the only one meticulously planning for the day Big Daddy lets his estate go. Brick’s older brother Gooper (Justin McCombs) and his grating wife Mae (Kelly Mengelkoch) are also in attendance for the celebration and have plans of their own to secure his father’s favor.

Each actor brings their own strength to each headstrong character, allowing them to take control of the stage and shine. As Brick, Niezgodski skillfully layers an all-American boyish charm over the darkness within this has-been former football star. And Hopkins commands the stage as Big Daddy as he imparts wisdom, demands respect and unearths harsh truths. Just as captivating is Rader, who brings a varied cadence to her character’s passionate emotions, which imparts a much-needed complexity to the intense show.

But as a whole, it’s the strength of the entire cast working together that perfectly demonstrates the constant tension that develops when so many grim conversations are held in a space where every word said can be overheard by someone for whom it’s not intended.

On opening night, the cast assembled in the lobby of the theater with director Michael Evan Haney to deliver toasts. Rader thanked the late Williams, who died in 1983 and whose other classic plays include A Streetcar Named Desire and Sweet Bird of Youth, for creating such a strong female character back in the 1950s.

Even outside the context of the show’s content, Cat on a Hot Tin Roof emphasizes Williams’ ability to create suspense and captivate an audience for several hours. Each character references and re-references dark secrets, old conflicts and meticulous plans, leaving the audience longing for the mysteries to unfold. That’s a feeling this production conveys brilliantly.