The 24-year-old musician classifies her music as Soul — as in her soul to yours. 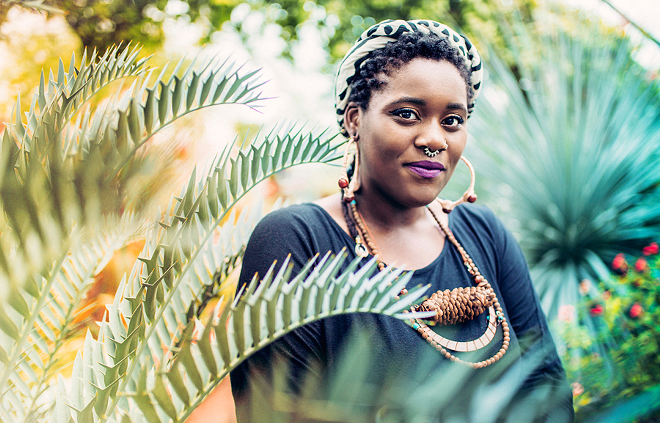 Photo: Hailey Bollinger
Jennifer Simone’s unique sound is influenced by everything from Nina Simone to whale calls.
Before she begins her set, 24-year-old Jennifer Simone lights a stick of incense. The smoke curls around her as she sits on the floor of the stage surrounded by empty brass dishes, frog-shaped instruments and noisemakers of various shapes and sizes, waiting for the right moment to begin. Her first song starts with a single sound.

“It’s all improv,” she says. Each musical performance is an improvised healing process, for herself and for the audience.

Simone strikes a piece of wood against a dish, capturing the sound in a microphone connected to a looper pedal — a small device that, when activated, repeats the caught noise ad infinitum. The process is visceral and etheric. Once the sound of the first noise begins repeating, Simone transitions to another noisemaker, instrument, wind chime or her own voice, and begins layering sound over sound, voice over voice, until her music falls like water into your lap. Her singing rises and falls inward and outward, and aptly so —Inward/Outward is the name of her first EP (simonexzijn.bandcamp.com), a collaboration with artist ZijnZijn ZijnZijn!.

Simone’s music isn’t Ambient. It isn’t Punk. It isn’t Tribal. It’s somehow all of those things, and yet none. She attributes her unique sound to influences like Ladysmith Black Mambazo, whale calls, Gregorian chants, Nina Simone, Paul Simon, Erykah Badu, Elvis and “a ton of Jazz and Blues.” As a child, church services featuring participatory music shaped her sense of rhythm.

Simone classifies her music as Soul — as in real soul, from her soul to yours.

“People who might stumble upon me as an artist in the city create an assumption on what my art is because of my skin color, because of my identity that comes along with color,” she says.

At her shows, emotions run high. Her music evokes a powerful response — people openly cry and she often invites crowd members to sit on the ground with her. People tell Simone about their problems before she plays. And after listening to what those around her are thinking, she incorporates those feelings into her music. She believes in the healing frequencies of music — that in the vibrations of noise, there can be comfort.

“You don’t have to say a word about your problems to me to be healed by the sound in the room, although I have been there for many audience members to talk to, to hug, to let them cry on my shoulder or just stare into each other’s eyes for a moment,” she says. “Things get very intimate and human within the art I create.”

But the healing had to begin internally. Simone attended school in West Chester, Ohio from third grade until 10th grade. The suburban landscape that gave her safety and warmth as a child fostered the depression she experienced as a teenager. She had been learning baritone saxophone since the age of 11 but didn’t feel challenged at her school. On a personal level, being one of the only African-American students also felt isolating.

Her depression peaked when her family lost their home. She spent time living in hotels. There wasn’t time to get good grades or worry about school attendance. Her parents divorced. Where other artists would have stopped, Simone continued to create.

While living with her father, she saw an episode of Taking The Stage, an MTV reality show that featured students from Cincinnati’s School for Creative and Performing Arts.

“I was stunned that this school was in Cincinnati,” she says. “I felt like someone had been hiding a great, great secret from me.”

Determined to get into the school, Simone auditioned for the instrumental music program and was accepted. That acceptance was the key she needed as a young artist.

“Going to SCPA was the first time I had African-American teachers,” she says. “I didn’t know I needed teachers that understood what life in the skin was like, and everything that comes with it.”

Her teachers encouraged her. The hangover of depression began to clear. Simone started playing Jazz locally with friends, and then performing as a solo artist.

It was within Cincinnati’s eclectic local scene, where Jazz meets Electronic adventurism with open arms, that she first discovered her now-trademark looping sound.

“My dear friend Kafari would let me borrow his RC-30 loop pedal on occasion, and I would experiment like crazy until I saw him again,” Simone says.

In October, Simone opened for Helado Negro, Roberto Carlos Lange’s celebrated and prolific Electronic music project. Two months later, she got a text message from Lange saying that he had been interviewed by Bandcamp and had chosen her Inward/Outward EP as his favorite Bandcamp pick. The feeling of waking up that morning, as an artist who had come out of seemingly nowhere four years ago, was “absolutely amazing,” she says.

“To be a musician that can be identified as a woman of color in a city that still suffers with issues of racism and sexism, to be the absolute weirdo that I am and be given the space to explore even further than I have already reached… it is such a blessing,” Simone says.

In the Bandcamp article, Lange describes her music as mesmerizing: “The music healed me that night,” he says. “It healed so many people.”

Simone plans to release a complete album this spring and notes that even when she’s not physically recording, the process of making her first album and her spiritual journey are intrinsically linked.

“Even in my free time, I am creating music. My heartbeat and breathing rhythms when I’m doing yoga or bicycling, the tempo of my eye movement while I am reading creates a steady tempo to create a seamless experience,” she says. “You see? Everything is music.”

Hear JENNIFER SIMONE’s music at soundcloud.com/jennifer_simone and find out the latest at facebook.com/jennifersimonemusic.
© 2022 Cincinnati CityBeat