Local coffee roaster Deeper Roots recently opened its second coffee bar — a space with all the bells and whistles, adjacent to Findlay Market in Over-the-Rhine. The shop has a full range of seating both inside and out, something not available at the kiosk and mobile-style coffee shops within Findlay Market itself.

Deeper Roots started as a roaster in 2012 with a primary focus on selling wholesale coffee beans. But as their single-sourced beans grew in popularity, selling to local favorites like Rohs Street Café, BLOC and 1215 Wine Bar & Coffee Lab, owner Les Stoneham says the coffee bar concept became the next logical step in his business model.

“Opening up our own retail started out as that desire to kind of have a venue of our own where we could really tell the story of the coffee and have that conversation directly with the customers and fans of our coffee,” he says.

So in 2015, the first Deeper Roots Coffee shop was born in Oakley. Fast-forward two years to the new location in OTR — and peer into the physical setup of the coffee bar — and it becomes clear that telling that story became so much easier.

With a white-walled minimalist design featuring a Modbar pour-over system, quartzite countertops, a coffee display case and a large wooden table with shared seating (and millennial pink legs), the shop has a clear mission of bringing people together. In fact, the bar for customers is next to the La Marzocco espresso machine, on the same side as the barista, which Stoneham says was an intentional choice to help demystify the coffee-making process.

“It’s something different we kind of wanted to play with in terms of how you set up the space,” he says. “(Customers) can walk around, really rub shoulders with the barista, kind of look down in and see what’s going on as they’re pulling an espresso, take a seat at the community table right next to where they’re brewing coffee.”

The mystery of that perplexing hissing noise that follows your in-house cappuccino order? Solved. Just glance over the barista’s shoulder as she immerses the steam wand into a pitcher of cold milk to create the foam. 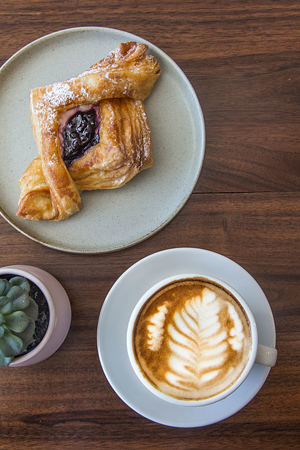 Along with their popular bread-and-butter espresso drinks like cappuccinos and cortados, Deeper Roots also has a rotating seasonal beverage selection. On the menu this fall is the Maple Leaf, a cortado with a touch of local maple syrup and orange zest, and the Honey Bear, a latte doused with local honey and dusted with cinnamon. They also serve MainWood pastries and Sixteen Bricks toast.

While forging new connections with your Deeper Roots barista, you may run into the topic of single-origin coffee beans, a mark of a high-quality coffee that makes Deeper Roots’ products so sought-after.

Single-origin beans come from a single farmer or one location. For Deeper Roots, sourcing those beans involves visiting countries known for their coffee industries to work directly with farmers to solidify a business relationship and bring home the best beans possible. One of Deeper Roots’ current top-sellers is Guatemala La Armonia Hermosa — its taste profile offers notes of plum, chocolate and licorice.

Stoneham says coffee culture tidbits like this are what make the interactive coffee bar model fulfill its purpose.
“The conversation we want to have with customers is expanding coffee knowledge and appreciation, and it’s really impossible to have some informed discussion around that without talking farmers, the land that the coffee’s coming from and the context there,” he says. “We really focus on the barista’s knowing the stories of all the coffees and being able to communicate those as well.”

The Deeper Roots roasting facility and headquarters is also migrating closer to the city from its location in Mount Healthy to a building 10 times its size in the West End. For the past five years, the roaster has expanded its reach across the region, providing coffee for shops in Dayton, Columbus, Akron and even Pittsburgh.

“It just kind of happened,” Stoneham says. “We don’t know what our future is going to bring, we don’t know where people are going to open up new places. Everything we do is word of mouth. ...We just take it one step at a time.”

For now, this means an OTR venue to peddle their java, and it’s officially open for business.