Located just past Winton Woods, this suburban enclave was created by the government during the Great Depression era 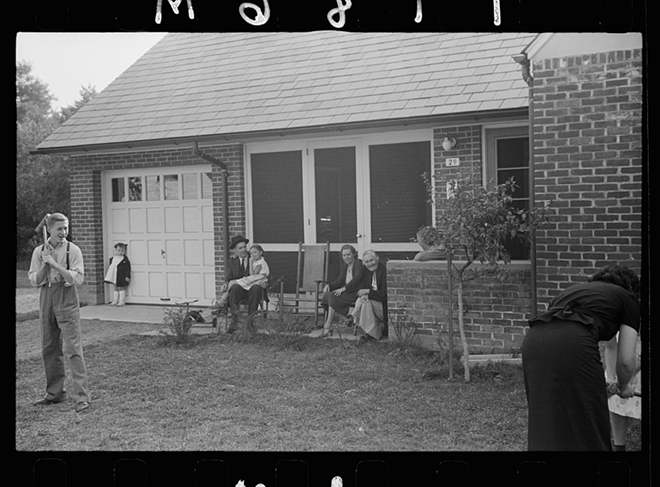 PHOTO: John Vachon; Retrieved from the Library of Congress
A Greenhills family. 1938.

But the village’s history runs deeper than its sleepy present-day appearance. During the 1930s, it was one of three Greenbelt Communities built by the federal government; Greenbelt, Maryland and Greendale, Wisconsin round out the trio.

“The interesting thing about Greenhills is that it’s really under-appreciated locally,” says Anne Delano Steinert, a public history doctoral student at the University of Cincinnati. “People don’t really realize what an important national exemplar it was.”

As Greenhills celebrated its 80th anniversary in spring (and was named a National Historic Landmark in 2017), the “New Deal Neighbors” online project came to fruition through a public history practicum course at University of Cincinnati, which Steinert helped lead alongside Dr. Tracy Teslow.

Each of the seven students that made up the spring practicum course interviewed three of Greenhills’ earliest residents to collect their memories about the village. Now, those interviews are available on a website in the form of videos (except one interview conducted via phone) and transcripts.

Conceived during the Great Depression, the three experimental suburbs were meant to create jobs and provide affordable housing for working-class families, with urban planner Rexford Tugwell — who helped develop policies for President Roosevelt’s New Deal — at the helm. Steinert has both a personal and academic love of Greenhills, as her grandparents were original owners in the village, having moved there in ‘38. Her aunts and dad all grew up there.

“The story of Greenhills is really important and foundational in the way that American suburbs begin to get created,” she says. “Which then really has a drastic influence on American cities and metropolitan areas rippling forward even today.”

She also knew that as the original neighbors aged, their stories were at risk of being lost. Through the site, she hopes to preserve those memories for future historians. Working with the Greenhills Historical Society, the students were able to gain access to willing interviewees.

One of those was Stanley Wernz; raised about three miles outside the village on a farm, he attended Greenhills' public schools.

“It was a wonderful community; everyone cared about someone else,” he recalls in his interview. “If I got involved in some difficulty, often, my mother knew about it before I got home. There would be somebody who called and say, ‘You know, you need to talk to him about this.’”

He shares idyllic memories of playing kick-the-can in the cornfields with his siblings and participating in the high school’s band, where he played the trumpet, baritone horn and sousaphone.

Many of the other interviewees recalled similar, fond memories: playing in the scout cabin local dads built from old telephone poles, spending entire summer days splashing and lounging at the pool, taking the bus to downtown Cincinnati and shopping at department stores like Shillito's. Visitors of the website can explore these spaces via a map that pinpoints various Greenhills landmarks.

PHOTO: John Vachon; Retrieved from the Library of Congress
The shopping center in Greenhills, Ohio. 1938.

Re-listening to the interviews, Steinert says, “The real feeling is that in the early years of Greenhills it was this incredible feeling of closeness and mutual support and that everyone was sort of pitching in to help one another.”

But Steinert also notes that there was “some lament over the way Greenhills has changed over time.” That sense of tight-knit community has now seemingly petered out, for an array of reasons.

“One of the key reasons is that when the government selected residents of Greenhills, they engineered it,” she says. “They engineered it in two ways: They physically built it into the environment — the form of the town encourages community — but they also hand-picked the residents.”

The result was a homogeneous group of people, which meant that the community excluded others, including people of color. 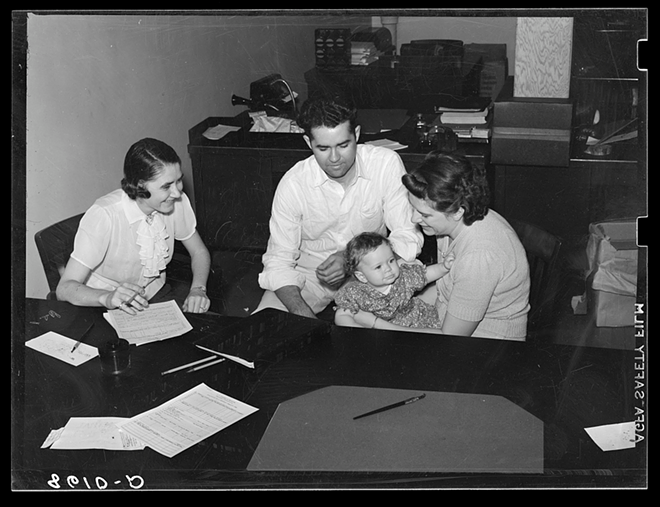 PHOTO: John Vachon; Retrieved from the Library of Congress
A prospective family being interviewed in the family selection office. 1938.

Wernz points to this in his interview, saying that the prejudice disturbed him. As a fourth grader, he remembers going to the pool with one of his classmates, who was black, that lived south of the village.

“They sold me my ticket, and I went in and I stopped to wait for him and they would not sell him a ticket,” Wernz says. “I didn't have the gumption to say, ‘Well, then I can't go either.' And that bothers me to this day. I didn't stand up for that kid, and he was my friend.”

The ages of the subjects mostly hits in the 80s-range, with Thomas Haverland (who moved to Greenhills as a teenager) — who is in his 90s — being the oldest, and Glory Southland Green, in her late-50s, being the youngest.

In the village’s 80th year, Steinert has a new appreciation for the importance of collecting the residents’ stories. When she first started the project she hoped to interview her aunt, who lived in California. But she passed away in June of this year.

“I didn’t get to include her story, which was a bummer,” she says. “But it just brings home the point of doing oral histories, which is that these great stories —  these rich lived experiences, memories that no one else has — can just be extinguished in a moment.”

Now that the project is over and the site is live (newdealneighbors.com), Steinert says it’s being handed over to the Greenhills Historical Society so they can add additional interviews if they'd like.