When White Folks Use Drugs

I am troubled and frankly bitter at the newfound compassion extended to disproportionately white drug users, because this sympathy has so long evaded people of color. 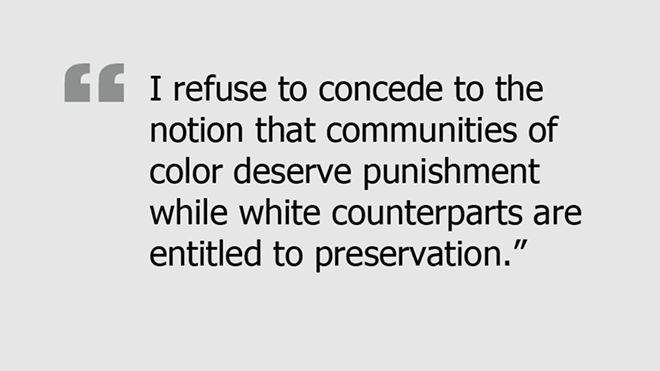 EDITOR’S NOTE: During the second half of 2016, CityBeat has invited three local activists to write monthly columns on pressing issues facing Cincinnati. Christina Brown is a Cincinnati-based activist working for racial equity and social justice through a number of venues. Her columns will appear in this space the second week of each month.

Presidential election commercials are the worst, especially if you live in Ohio.

But I recently noted a departure from the incessant fear mongering that Democrats and Republicans often engage in when I accidentally caught a slot from U.S. Senator Rob Portman drawing attention to the heroin epidemic and his efforts to combat the problem with his Comprehensive Addiction Recovery Act (CARA) legislation.

It began with a statistic about the number of people who overdose on heroin each day. The commercial then introduced a mother who lost her young daughter to an overdose, a narrative that is unfortunately common nationwide.

For unsettling reasons, the commercial lingered with me long after his voice intoned, “I approve this message.”

While I approve of the rare bipartisan collaboration to tackle the overwhelming issue of heroin addiction, I am troubled and frankly bitter at the newfound compassion extended to disproportionately white drug users, because this sympathy has so long evaded people of color.

The empathetic tone often employed by politicians and the media when describing the heroin crisis is a profound shift from the condemnation and criminalization that black and brown communities have endured for decades.

Until fairly recently, mainstream American press typically painted addiction, particularly within poor communities of color, as proof of the absence of morality and discipline of shiftless nonwhites.

Take, for example, this passage from a 1999 Cincinnati Enquirer story about black Cincinnati Bengals player Stanley Wilson, who was addicted to cocaine.

“Ten years ago this week, Stanley Wilson ruined his life,” the piece begins, before offering up a graphic description of Wilson snorting coke before a pre-Super Bowl team meeting in 1989.

“The player was sweating and shivering. White powder flecked his nose and upper lip. The devil was back, for good.”

Wilson ended up being sentenced to 22 years in California state prison under the state’s three-strikes law after a burglary attempt. During his trial, his attorneys presented evidence that Wilson suffered from bipolar disorder.

Many media outlets picked up Wilson’s story, but few if any delved into his background or the possibility that he might have suffered from a mental illness.

In the popular narratives of the time, drug abuse among communities of color was not viewed as a consequence of persistent discrimination or trauma. The prevailing tale usually diminished the complex issue of addiction into a self-imposed hurdle from an already undesirable population.

Many dog-whistling white pundits still enjoy evoking these coded ideologies and language today, with terms like “black on black crime” and “culture of poverty.” The labels of shame were not exclusive to drug users themselves, either. Their stigma also extended to children, sensationalizing and exploiting substance-addicted infants of color from the ’80s as “crack babies.”

Heroin users who are mostly white are now presented in a more nuanced manner. Instead of branding people experiencing addiction as inherently bad, folks struggling with substance abuse who happen to be white are seen as people who fell victim to America’s prescription drug problem and white America’s fading economic and social security.

White people are even granted more dignity in their deaths when a cocaine overdose is the suspected culprit. Kiersten Rickenbach Cerveny was a mother of three who died tragically of an overdose. Her story was told with gentility and humaneness, often absent from media narratives of people of color who have died in similar unfortunate circumstances.

“A night of blowing off steam in Manhattan for a visiting mother of three ended tragically on Sunday morning,” a piece on Cerveny’s overdose published last year by The Daily Beast begins.

Others are noticing these nuances. Atlantic editor Andrew Cohen asked in an article about the heroin epidemic last year: “Are policymakers going easier today on heroin users (white and often affluent) than their elected predecessors did a generation ago when confronted with crack addicts who were largely black, disenfranchised, and economically bereft?”

It is possible that this newfound compassionate approach is an exercise in intense reflection and application of best practice. But even if that’s true, the fact remains that people of color are still disproportionately arrested and convicted for drug use.

To what can we attribute these stark realities? The phenomenon also reflects America’s pervasive racial empathy gap — studies have found that there is an overwhelming apathy to the literal pain blacks experience across the various levels of society.

Across the nation, task forces are assembling to provide creative, non-criminal, solution-based approaches to opioid addiction. First responders are being supplied Narcan to revive folks on the brink of death from overdose. Cities like Ithaca, N.Y. are shopping the idea of supervised drug use sites to provide safer space and medical assistance to drug users.

Arresting and jailing is not the call to action to solve these problems when they seem to befall whites. What if issues within communities of color were approached with such institutionalized imagination and resources?

The contrast between the response to drug addiction in mostly white communities and similar epidemics calls up a deeper question: Who do we deem worthy of social and systemic redemption?

My frustration with the prioritization of white people’s problems does not make me indifferent to the pain endured by these communities in peril. But I refuse to concede to the notion that communities of color deserve punishment while white counterparts are entitled to preservation.

Empathy shall not, and cannot, be a white privilege. Addressing the needs of marginalized people of color should not require society to view their struggles through the frame of whiteness. People of color, whether documented or not, receiving government benefits or not, employed or not, deserve the resources and ingenuity to improve their quality of life, too.

CHRISTINA D. BROWN serves in a full-time role with the Cincinnati Human Relations Commission and is a board member for the Martin Luther King Coalition, Cincinnati Young Black Professionals, Affordable Housing Advocates and the Walnut Hills Redevelopment Foundation, of which she is president of the board. A University of Cincinnati graduate, Christina is most passionate about anti-oppression, persistently lecturing and organizing for various social justice causes and racial equity since 2006. Her columns will appear in CityBeat the second week of each month. CONTACT CHRISTINA: [email protected].