WTF is this Sarahah thing?; true love is a lie because Chris Pratt and Anna Faris are separating; Caitlyn Jenner was spotted in a MAGA hat days after Trump’s transgender ban tweet, then claimed she didn’t realize what she was wearing and now hates Trump. 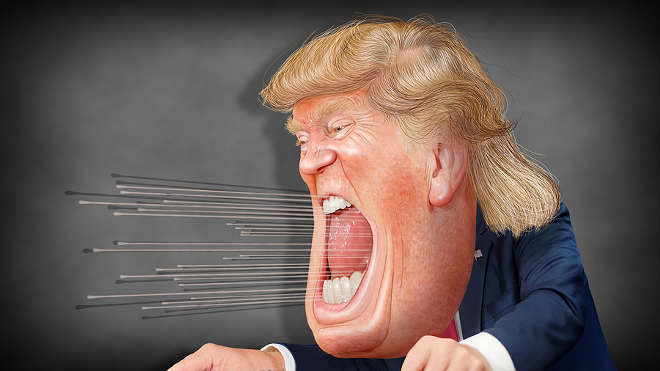 So, WTF is this Sarahah thing everyone’s talking about? The anonymous messaging app launched in February with an English version arriving in June and has recently topped Apple’s App Store charts. The word “sarahah” roughly translates to “honesty” in Arabic (cue nationalists clutching their collective pearls), and the app was originally intended for employees to give anonymous workplace feedback without being judged by their bosses. But now it’s being used by just about anyone (masochists?) asking for open, nameless questions and comments. The internet is already a dumpster fire of trolling and hate without the aspect of total anonymity, now we’re just inviting folks to add a page to a digital Burn Book. Think about the children!

A cannabis company this week announced its purchase of an entire California town to turn into a pot-friendly tourist destination. That’s right: Weed companies are banking so much, they’re straight-up buying entire cities. American Green, the largest publicly traded cannabis company in the country, looks to build “an energy-independent, cannabis-friendly hospitality destination” on the 80-acre site. They hope to feature a bed and breakfast, dispensaries, CBD mineral bath spas, art and culinary events. Sounds like a pot head’s version of Disneyland. Think about it: endless amounts of baked goods, sweet scents being pumped into the air, trippy rides…

Once a couple’s wedding day is over and the honeymoon has passed, some of that newlywed sparkle begins to fade as you get back to normal life sans floral arrangements and carefully crafted hashtags. That’s when wedding photos are so clutch. When you’re a few weeks into marriage and no one’s gushing over details or planning you brunches anymore, that’s the time to assault your social feed with perfectly captioned shots from your big day. And that’s probably what Andrew and Neely Moldovan wanted to do when they asked wedding photographer Andrea Polito for their pics before their agreed upon date. They channeled their inner Veruca Salt, demanding their photos now, and they didn’t want to fork over $125 for the Italian-leather-bound photo album, either. So, like anyone over 30 who’s ever had a marginally unpleasant flight, the couple went in hard on social media. The Moldovans flooded Polito’s pages with negative reviews, cried to local news stations and allegedly ruined her career. Well, hopefully those photos turned out decent, because they ended up costing the Moldovans $1 million thanks to a defamation suit filed by Polito. They could have saved some cash and done what everyone else does to stay social media-relevant after marriage — have a kid.

In the age of premium cable giants like HBO and streaming platforms like Netflix, it’s easy to forget that television doesn’t have to come with a monthly bill. But good old-fashioned local channels really are still available — and free — today. In fact, according to a survey cited by the Wall Street Journal, nearly a third of Americans don’t realize they can get free TV with an antenna. But, as so many are wont to do lately, this story places the blame on millennial dummies — note the headline, “Millennials Unearth an Amazing Hack to Get Free TV: the Antenna,” dripping in sarcasm — when really, folks across the board are confused about broadcast TV thanks to the federally mandated shift to high-def in 2009. Remember when you either had to buy a new HD TV or get a converter box? Well you can still hook up some rabbit ears to get your ABC, CBS, FOX, NBC, The CW and PBS without paying for cable. Cut to millennials: “Why would we want those channels?”

The fifth installment of the Sharknado franchise descended upon the masses Sunday, but earlier this week The Hollywood Reporter published a story on the phenomenon which included some juicy tidbits. When the original debuted in 2013, star and 90210 alum Ian Ziering only signed on in order to qualify for Screen Actors Guild health insurance. Now he’s making $500,000 per flick — four times more than co-star Tara Reid. And none other than Donald Trump was in talks to play the president in Sharknado 3, and he got to the contract stage before turning to more serious pursuits. As for Sharknado 5: Global Swarming, judging by the title we’re calling it the Inconvenient Truth of this generation.

It’s the best day of the year! No, not Treat Yo’self Day (that’s Oct. 13, Parks and Rec fans). Monday marked the conclusion of Crop Over, the day we all get to see unofficial Barbados queen Rihanna living her best life in an incredible costume. Crop Over is a three-month Barbados harvest festival that ends with a carnival parade, Grand Kadooment. Imagine the Taste of Cincinnati lasting all summer long. Actually, maybe don’t. Anyway, for years RiRi has returned to her native island to celebrate and appear in the festival’s parade in epic bejeweled bikini with feathery accoutrements. A nearly “nakey, nakey, naked” Rihanna gets to party with her people, and we all get to watch in amazement. On second thought, maybe it was Treat Yo’self Day.

This week in questionable decisions: A Norwegian anti-immigrant group mistook a photo of empty bus seats for *threatening* women wearing burqas; The Sun, New York Post report that “boobs are back in a big way”; Kevin Can Wait will kill off Kevin James’ TV wife to introduce former King of Queens co-star Leah Remini (take that, Scientology!); a Japanese chicken joint debuted a dipping sauce made from famous singers’ sweat; Caitlyn Jenner was spotted in a MAGA hat days after Trump’s transgender ban tweet, then claimed she didn’t realize what she was wearing and now hates Trump; Amanda Knox defended the woman convicted in the texting suicide case; True Love is a Lie: Chris Pratt and Anna Faris are separating; True love is a Lie, Part 2: The Bachelorette’s Rachel chose Bryan over Peter.