Critic's Pick: ‘Listen for the Light’ at Know Theatre 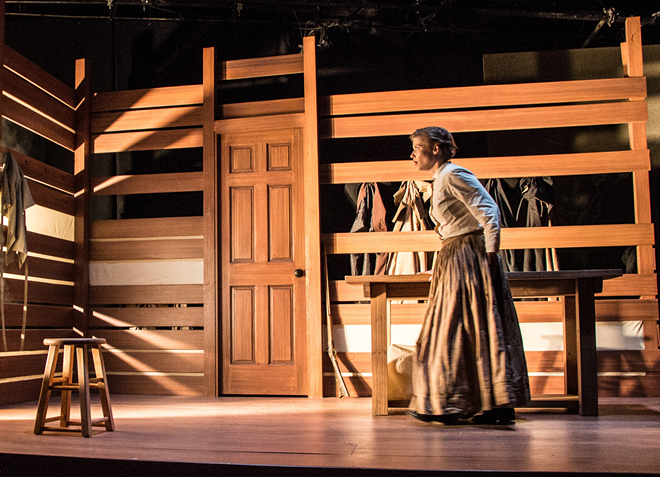 Listen for the Light is dark. Know’s description of the play grounds it in “a little-known and bloody moment in American history.” Set in 1844, the story focuses on a time of great tension within a Mormon enclave in Illinois as members clash with non-believers.

It is sad. There is more loss than love in this story of an ex-slave, a doomed Mormon prophet and his barely literate teen bride.

It is weird. The show is rife with literal deus ex machina as an unseen God directs the fates of each character, sometimes with smoke bombs.

But oh, is it funny. Corthron’s dialogue is clever, but it is the young character Lula — and more specifically, actress Tess Talbot — who breaks the tension in Listen for the Light. Lula is 17, a hardheaded tomboy who loves to hunt and is too impatient for prayer. She may be young and uneducated, but Lula knows a thing or two about the world — it is her bratty tirades that Talbot molds into hilarious, fresh and touching moments. Talbot seems unrehearsed, with a natural sense of pace and energy that keeps our eyes glued to her.

Josh Katawick’s Joseph Smith, the Mormon prophet, is an intriguing foil (and potential future husband) to Lula. Where Lula chatters mile-a-minute, director Tamara Winters has allowed Katawick time and space to chew his words pensively, methodically. It gives Katawick the confident air of a prophet. Listen for the Light is monologue-heavy and Katawick’s are some of the best, displaying both a roiling, human fury and the patient arrogance of a man with God’s ear.

Rounding out this three-person cast is Darnell Pierre Benjamin as Eli —a teacher, carpenter and former slave. We meet Eli at the top of the show, reminiscing about his newborn daughter who died during his bid for freedom. Eli is yet another foil to Lula — educated where she is not, focused where she is restless and black where she is white. Having lost both his daughter and his wife, Eli wonders why he has been spared and is eager to put that good fortune to use.

I might describe the production design as “complexly simple.” At first, the audience sees only scenic designer Sarah Beth Hall’s sparse, neatly built set consisting of a few partial walls, a few sticks of furniture and three doorways. The complexity arises instead from lighting (Andrew J. Hungerford) and sound (Doug Borntrager). The lighting cues are complicated and surprising, including a fire that seems to engulf the audience.

A large screen produces characters’ memories, ideas and fears for the audience to see (occasionally distracting from more tender moments happening on stage). The production is rife with Mormon hymns (recomposed by Borntrager), gunshots and the voices of unseen characters. The overall gestalt is quite beautiful and nuanced, but sometimes at war with the simple, cedar-toned set and Noelle Johnston’s understated costumes. (I will say: No one can replicate a candle being extinguished like Andrew Hungerford.)

One element of the production design that flummoxed me was the decision to pantomime certain objects, but not all. For instance, we see Eli sitting on a physical stool while carving an imaginary chair. Or whittling a real doll with an invisible knife. Lula carries an actual gun and a pretend blanket. While I suppose the amount of possible props could overwhelm the production, the imaginary ones are at odds with the otherwise wildly detailed production. If there was a metaphor behind this, it missed me.

The show is also incredibly ambitious, making for a very dense two-and-a-half-hour production. The play tackles race, gender and faith — throw in plural marriage and sexual compulsion and it’s a lot to take in. That said, Know Theatre takes big risks with each world premiere from up-and-coming playwrights that it champions and should be commended for its dedication to the future of theater. Listen for the Light could possibly use a trim — both in content and production — but the story it tells and the smart way it tells it makes this a production worth seeing.

LISTEN FOR THE LIGHT runs through May 13 at Know Theatre. Tickets/more info: knowtheatre.com.