A recent study found that athletes who endorse unhealthy food and beverages create the illusion (especially for kids) that those products are far healthier than they actually are. LeBron James is in a 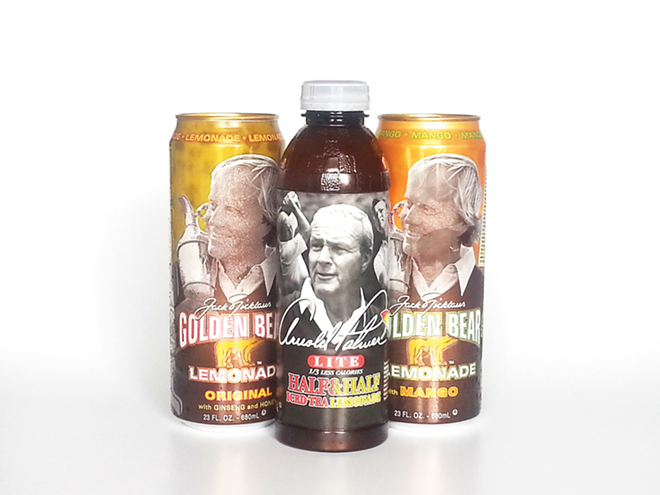 A recent study found that athletes who endorse unhealthy food and beverages create the illusion (especially for kids) that those products are far healthier than they actually are. LeBron James is in almost super-human shape, but plugs McDonald’s and Bubblicious gum. Peyton Manning will go into the football Hall of Fame, so it’s doubtful he lives on a steady diet of Papa John’s pizza and Oreos — though he doesn’t mind telling kids it’s OK to do so.

Some athletes take their endorsements a bit further, letting their name and image be slapped all over the packaging of a product; it’s a long sports tradition. And the AriZona Beverage Company has found a surprising pair of athletes to connect to their drinks: golfers Arnold Palmer and Jack Nicklaus.
Their products sell remarkably well and you can find them at most convenience stores and supermarkets. And although the company has been criticized for the high sugar content of its beverages, Palmer and Nicklaus aren’t really the type of sports stars to make kids start chugging AriZona tea on a regular basis.
The “Arnold Palmer” is a drink popularized by the 84-year-old Palmer, who enjoys mixing lemonade and iced tea. The legend goes, when he ordered one in public, eavesdroppers simply began asking for the “Arnold Palmer.”
That was in the early ’60s and, as a recent documentary for ESPN’s 30 for 30 Shorts series showed, the drink’s legend lives on today and is now more well known than its namesake — especially among younger people who have picked up one of AriZona’s many Arnold Palmer flavor options.
The company began distributing pre-packaged Arnold Palmers with the golfer’s image and signature in the mid-’00s. ABC News reported that the company’s Arnold Palmers made $200 million last year in the U.S., helping to make Palmer the highest-paid golfer behind only Tiger Woods and Phil Mickelson. And Palmer hasn’t won a major since 1973.
The “Southern Style” Sweet Tea Pink Lemonade Arnold Palmer has high-fructose corn syrup as a primary ingredient, but at 24 grams per 8 oz. serving, it has less sugar than a can of cola (albeit only about 3 grams less). It’s OK, but the “tea” flavor is drowned in all of the sugar.
Fellow golfing legend Jack Nicklaus, 73, muscled his way on to Palmer’s turf last year with the introduction of Jack Nicklaus Golden Bear Lemonade from AriZona. Cans of lemonade bearing his face and signature include mint, mango, strawberry and honey. Nicklaus — who has lent his name (or nickname, Golden Bear) to everything from wine to flooring over the past 40 years — is celebrated on his cans quite a bit more than Palmer, with factoids about his career covering the packaging. The “Original Flavor” is far less sweet than the Arnold Palmer I tried, with the honey and ginseng flavoring making for a nice, unexpected twist.
A sports star many more people are aware of — retired NBA great Shaquille O’Neal — saw the release of his Soda Shaq line this year from AriZona. Perhaps because of his higher profile, the rollout didn’t go as smoothly.
Health organizations lashed out at O’Neal for the sponsorship, saying lending his name to the high sugar content (about 24 grams per 8 oz. serving) cream soda — available in vanilla, blueberry, strawberry and orange and each featuring Shaq’s giant, goofy mug — was “shameful hypocrisy” because the former baller has spoken out about such drinks in an effort to fight diabetes and obesity.
But parents and health groups might not have to worry much longer about Shaq’s soda. Reviews haven’t been great (one on Buzzfeed said, “We all make mistakes. Shaq’s was making this cream soda and mine was drinking it”) and it is getting harder to find, at least for me.
I first saw the soda about a month ago at the independent grocer in my neighborhood, a store with a horrible selection and high prices. It stocks the kind of items you’ll later see at dollar stores or Big Lots.
When I returned recently to grab a can for sampling, the huge display was gone, as was any sign that the hundreds of cans of Soda Shaq ever existed.
Barring a miraculous fourth quarter comeback, AriZona will probably think twice about signing another deal with a contemporary athlete.
Perhaps the key to a non-controversial endorsement deal is to sign someone who kids have never heard of before. I bet Ben Hogan’s or Sam Snead’s families would be up for some of that lucrative AriZona business.
© 2022 Cincinnati CityBeat