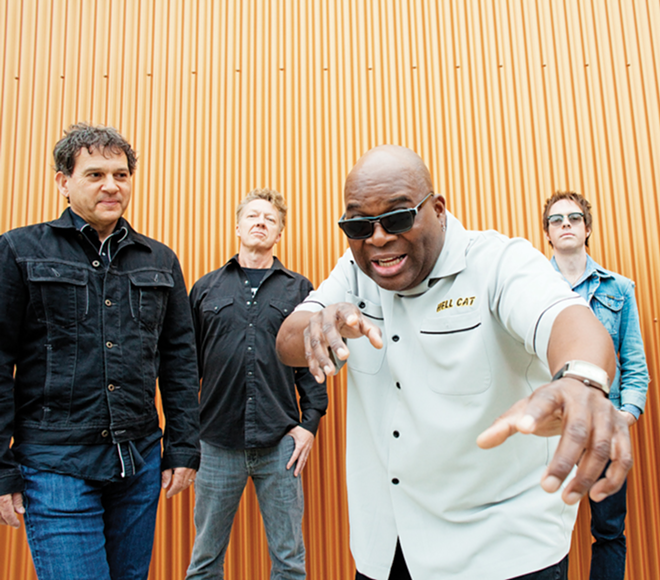 Barrence Whitfield & the Savages have had more lives than a Buddhist cat. They recorded two brilliant albums in the early ’80s, broke up in 1986 and reunited in 2010, resulting in three exceptional albums — 2011’s Savage Kings (on Cincinnati’s Shake It label), 2013’s acclaimed Dig Thy Savage Soul and their latest, Under the Savage Sky (both on Bloodshot Records). Given this consistent output, it’s natural to wonder how the quality remains so high.

“We just come up with great, interesting tunes,” Whitfield says. “We try to stick to the same formula like guys of the ’50s and ’60s; sometimes it’s all about peoples’ lives and things going on in everybody’s world.”

Given their history, the Savages are elder statesmen of the Garage Rock/R&B/Soul scene. Whitfield and Customs/DMZ/Lyres guitarist Peter Greenberg founded the band in 1981, but Greenberg left music for the energy industry. Whitfield soldiered on with different bands, but never to equal effect.

In 2008, Shake It honcho Darren Blase helped organize a Customs reunion and Greenberg, who hadn’t played guitar in 20 years, regained his musical passion. When Ace Records reissued the out-of-print Savages albums, Greenberg and Whitfield reconnected to discuss the project, and the reunion was on.

This year, after relentless roadwork behind the last two albums, the Savages toured with the Northwest’s legendary Sonics. It was an enlightening experience.

“It opened a new perspective on Rock & Roll,” Whitfield says. “Here are bands born way before 1995, making records, standing on stage and entertaining people at their age. They’re still putting out great product, whether it’s being listened to or not, but their prime focus is to entertain. You do the best you can and let the music speak for itself.”

Recorded at Cincinnati’s Ultrasuede studio like its predecessors, Under the Savage Sky is a crushing Garage Soul masterpiece due to the herculean efforts of the Savage five — Whitfield, Greenberg, bassist Phil Lenker, saxophonist Tom Quartulli and drummer Andy Jody — plus trumpeter Hitomi Taguchi and renowned Cincinnati keyboardist Ricky Nye. The album is proof that the quintet isn’t coasting on old glories, but substantially adding to its mythology.

“Each record moves up from the last,” Whitfield says. “We broke up in ’86, there was that time gap, but when we said, ‘We’re gonna do it again,’ all that creative juice came back. Our youth is still roaming and crawling in our bodies, and we have a lot of energy to give and a lot of music in our blood.”

It’s no surprise that the Savages return to Ultrasuede like swallows to Capistrano. The studio and the city have become special to the band.

“When you keep going to the same studio, you get the feel for it. You get comfortable,” Whitfield says. “We came to Cincinnati because of two guys who lived there, but since Savage Kings, I’ve become very fond of Cincinnati, the people and club owners who’ve really given us a second home. Tom, Phil and I are natives of Massachusetts, but we’ve also become natives of Cincinnati.”