The Baron's latest LP (which is trying to gain funding through Kickstarter) comes after a busy period for the musician, which has included a biography project and an every-Monday residency.

In 2005, drummer John Von Ohlen was inducted into the Cincinnati Entertainment Awards’ Hall of Fame. While his credentials and status in the Jazz world had long been established — Von Ohlen played in Stan Kenton’s and Woody Herman’s groups, as well as with Rosemary Clooney and many others — he is also a longtime educator at the University of Cincinnati’s College-Conservatory of Music and he co-founded the Blue Wisp Big Band in 1980. 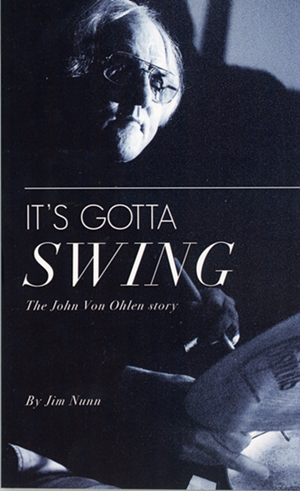 Baron John Von Ohlen was the subject of a biography published at the start of the year
But at that CEA ceremony, drummers from seemingly every corner of music (including Patrick Keeler of The Greenhornes/Raconteurs/Afghan Whigs fame) watched in awe as The Baron (as he is nicknamed) performed a set with piano player Steve Schmidt and other local Jazz greats, a testament to his jaw-dropping skills and how his legacy truly transcends genres.

Von Ohlen has remained very active since receiving those Hall of Fame honors, with 2017 being especially busy. The year began with the release of It’s Gotta Swing: The John Von Ohlen Story, a self-published biography written by Jim Nunn.

On the live front, while he no longer performs with the Blue Wisp Big Band, he still holds down a weekly gig with his Flying Circus Big Band, which plays a variety of dance-friendly music, including Swing and Latin Jazz, at 7:30 p.m. every Monday at The Greenwich (2442 Gilbert Ave., Walnut Hills, the-greenwich.com). The residency also serves as a benefit for the Freestore Foodbank; admission is $5 or two canned goods. Other members of the Flying Circus Big Band include Billy Byers, Al Cohn, Billy May, Alan Baylock and Frank Foster.

Creatively, Von Ohlen’s next project might be a little surprising to some of his fans. The album The Pond is based on several compositions written for piano as “compositional exercises.” When renowned pianist Kim Pensyl heard the songs, he invited Von Ohlen into the studio to record them.

There is currently a Kickstarter campaign to help bring those recordings to the public. The funds raised will go to covering the production of CDs and also the studio costs. Some of the various perks for donations include autographed CDs and photos, Blue Wisp Big Band CDs on which Von Ohlen played and a cool T-shirt designed by local artist/musician Joshua Moore.

The Kickstarter for The Pond ends on Dec. 12 and is in need of pledges (it’s an “all of nothing” campaign, so if it doesn’t reach the $5,000 goal, it won’t be funded). Click here to contribute. Blue Wisp Big Band’s Facebook page (facebook.com/bluewispbigband) has also been providing updates on the project.