Where to Watch Newly-Minted Oscar Winners on the Small Screen

Here’s where to check out the newest batch of Oscar winners in their recent and future small-screen projects. 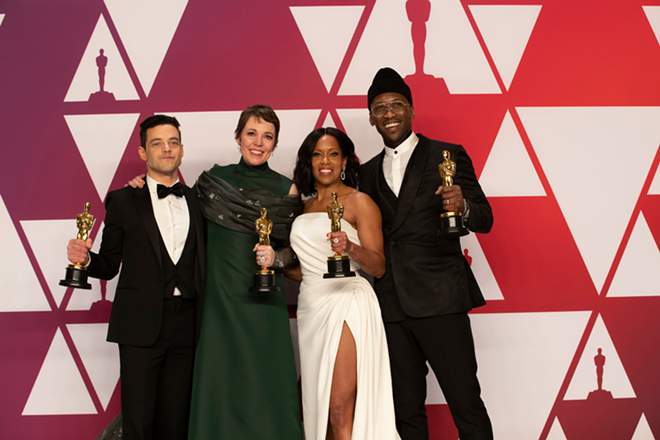 Courtesy of ABC // Rick Rowell
Rami Malek, Olivia Colman, Regina King and Mahershala Ali.
Whether you loved the outcome of this year’s Academy Awards or hated them, the winners of film’s biggest night are now among an elite pool of talent. And many of them got their start on TV, or at least dipped their toes into the medium’s waters. Some even have upcoming series to look out for. Here’s where to check out a handful of the newest Oscar winners in their recent and future small-screen projects.

From playing one real-life royal to another, Olivia Colman (Best Actress, The Favourite) will star in the next season of The Crown, Netflix’s popular historical drama tracing Queen Elizabeth II’s reign from 1947 to present day. With the third season — due later this year — largely taking place in the 1970s, Colman takes the reins from Claire Foy, who played a younger QEII in the first two seasons. And after portraying Queen Anne in The Favourite — albeit a completely different kind of monarch — I think she’s perfectly suited for the task.

Colman also starred in the lauded British crime dramas Broadchurch (all three seasons are on Netflix) and The Night Manager (the six-episode miniseries is on Amazon Prime). As a bonus, I’d love to see her host an episode of Saturday Night Live.

Rami Malek (Best Actor, Bohemian Rhapsody) may have been attached to a controversial film — the Best Picture nominee is two percent away from being rotten on Rotten Tomatoes and its director Bryan Singer faces several sexual assault allegations — but it’s undeniable that he delivered a top-notch performance of a highly revered figure.

You’ll get a true taste of his range if you watch his Emmy-winning work in Mr. Robot. A troubled but brilliant hacker with dissociative identity disorder, Malek’s character Elliot Alderson is a stark departure from the flamboyant Rocker Freddie Mercury. All three seasons of the psychological thriller are available on Amazon Prime; the fourth and final one is set to air on USA later this year. Oh, and Malek’s also rumored to be the next Bond villain, which I am so on board for.

Regina King (Best Supporting Actress, If Beale Street Could Talk) has mostly stuck to TV in the last decade, but with mounting awards and nominations for many of her roles, she was primed for that Oscar. King appeared in all three seasons of John Ridley’s anthology American Crime (all now on Netflix), voiced Riley and Huey Freeman on Adult Swim’s iconic animated series The Boondocks (now on Hulu) for nearly a decade and starred in the timely Netflix crime miniseries Seven Seconds.

But one of my favorite roles of hers was in HBO’s The Leftovers, in which she played Erika Murphy, a wife, mom and nurse largely unaffected by the mysterious “Great Departure” of two percent of the world’s population, only to watch her family crumble by other means. King teams up again with The Leftovers creator Damon Lindelof to star as Angela Abar in the upcoming HBO Watchmen comic adaptation, due later this year. With no signs of slowing down anytime soon, this Cincinnati native has come a long way from her 227 days!

Two for two in Oscar wins, Mahershala Ali (Best Supporting Actor, Green Book) is probably the biggest star to watch among all the nominated actors. He’s able to make a serious impact even in a small role (like in Moonlight) or a lackluster project (Best Picture winner Green Book is another controversial flick). Ali appeared in The 4440, Treme and Alphas, but I was first drawn to him as Remy Danton in House of Cards (Netflix), and was pleased to see him fill a totally different role in Marvel’s Luke Cage (Netflix).

Ali just starred in possibly the best season of the resurrected HBO crime drama True Detective — the finale of which aired during Oscars Sunday —  where he plays a fractured man investigating a twisty mystery over the course of nearly 50 years. (Read our recent review here.) We’ll definitely be seeing him onstage in the coming year accepting more awards for his compelling performance. Now, let’s get him a killer leading movie role.