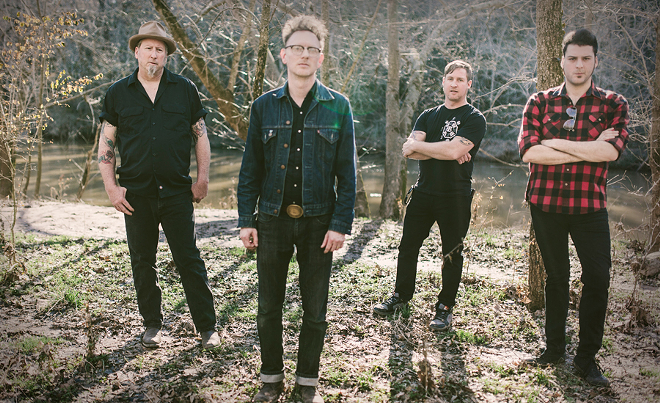 Photo: Joshua Black Wilkins
Legendary Shack Shakers
There is one band on the planet that can exist comfortably — or at all — at the center of a Venn diagram which impossibly includes Stephen King, Robert Plant, Jello Biafra, Billy Bob Thornton, Reverend Horton Heat, Marty Stuart, The Mute Comp Physical Theatre of Copenhagen, GEICO, The Far Side, The Jesus Lizard, The Damned, The Black Keys and Rancid. That’s the Legendary Shack Shakers. For the record: Author King is a big fan of the Kentucky-based Skronkabilly foursome; Biafra and Thornton have both sung with the band; GEICO used their song “CB Radio” in a year-long TV ad campaign; Jesus Lizard guitarist Duane Denison was a band member for four years; frontman J.D. Wilkes occasionally performs a speaking role for Mute Comp’s production of the dramatic gun-running play FUBAR; the band’s 29-second intro song “Cow Tools” is named after one of Gary Larson’s impenetrable cartoon panels; and the Shakers have opened for everyone else on the aforementioned list. And that barely begins to explore the complex and improbable cross currents contained within the Legendary Shack Shakers.

The Shakers started off as a relatively traditional Rockabilly outfit, but ultimately expanded its palette to include Country Blues, carnival music, Roots, Swamp and Southern Rock in a howlingly unique genre blend the band dubbed Southern Gothic, which is defined by darkly compelling stories and a soundtrack that can be as gentle as a front-porch rocking chair or as frenetic as a tornado in a gun and knife shop. Wilkes has often been compared to Iggy Pop and Jerry Lee Lewis due to his manic stage presence, but he’s as unique as a serial killer’s thumbprint and just as hard to pin down.

After 22 years, eight albums and close to a dozen lineup changes, Legendary Shack Shakers are still living up to every word in their name.