An Art Show with Punk Spirit

Currently on view at the Art Academy of Cincinnati, "Pretty. Vacant." — part of the academy's "Collectors Series" — features selected works from the collection of George and Linda Kurz. 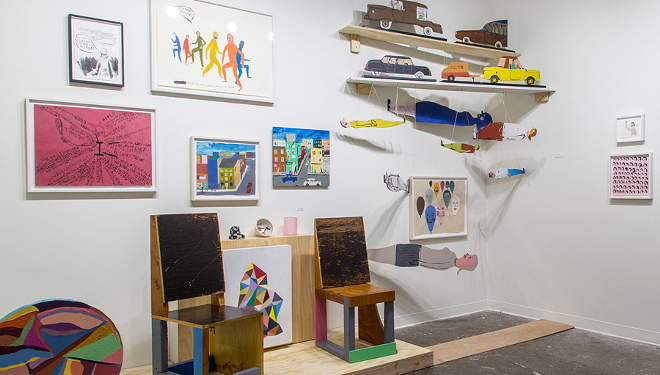 Various art sites around town — ranging from institutional galleries and museums to more DIY artist-driven spaces — offer collector-focused exhibitions like the one currently on view at the Art Academy of Cincinnati called Pretty. Vacant.: Works Celebrating the Spirit of Punk, Selected from the Collection of George and Linda Kurz.

Such exhibitions at traditional museums are a problematic endeavor — showing work owned by a potential future donor in a formal institution effectively canonizes the art and thus inflates its market value.

But Pretty. Vacant. is exactly the right kind of show for the exact right venue.

It is the fourth installment in the Art Academy’s “Collectors Series” of exhibitions, which coincides with the beginning of the school year.  Previous showings of work from local contemporary art collectors Sara Vance Waddell, Michael Lowe and Andy Stillpass were all titled simply Selections from the Collection of…

Instead, the Kurzes’ exhibition title comes from the Sex Pistols song of the same name, and the show reads quite differently than the previous three.

George Kurz explained his thoughts about the process of selecting works for the show in a phone conversation: “We wanted the show to be driven by attitude — not medium, era or style. It’s a collaborative process.”

And, indeed, it sounds like it was a labor of love for the students and various Art Academy faculty involved in pulling off the installation of no less than 75 (extremely valuable) artworks in two diminutive exhibition spaces in the school’s Over-the-Rhine building.

Just hours before the opening reception Aug. 25, Art Academy exhibitions coordinator Matt Coors described how the collector was hands-on throughout the entire process of choosing the artwork, its installation and crafting the show’s nine-page gallery guide.

Kurz really wanted to involve the school and the students as much as possible. He brainstormed various methods of installation with Coors and faculty members.

The Kurzes seem drawn to both the provocative and the figural in various mediums — there are four Robert Mapplethorpe photographs, for instance.

The Johanson installation demonstrates the collector’s resourcefulness. Many of the wooden cutouts of “floating bodies” had been gifted to the artist’s friends — often folks who Johanson felt needed some financial assistance. In order to get enough of them to create an installation (seven are included in Pretty. Vacant.), the Kurzes would buy the objects (which were once on view at the Venice Biennale) one at a time as they came up on auction site. Kurz explains that they were spread all over the country and pretty difficult to tack down.

“Most of these things come up just by chance and you either buy them now, figure out a way to pay for them and find the money later, or you don’t get it,” Kurz says. “When you’re ‘all in,’ you’re often art rich and cash poor.”

He explains that a lot of the artists whose work he and his wife collect “come from different backgrounds but share the desire to be agitators.”  Many are also artists who, despite being beloved by curators and other artists, often make work difficult to sell.

“That’s something I respect a lot — someone so committed to their vision that they’re not going to compromise by making something pretty or easier to digest,” Kurz says. “I think art is supposed to shake things up and make people think and maybe even upset them.”

And so art that is, as Kurz terms it, “a little bit edgy,” fits his — and thusly, Pretty. Vacant.’s — aforementioned “attitude.”

PRETTY. VACANT. is on view at the Art Academy through Sept. 22. Admission is free. More info: artacademy.edu.