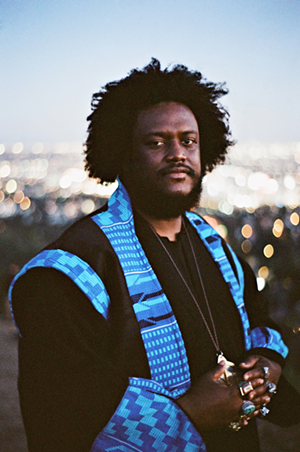 Photo: Jamie James Medina
Kamasi Washington
To quantify Kamasi Washington’s music as “Jazz” is almost a disservice. Washington most definitely quacks like a Jazz duck, but his walk encompasses the stuttering rhythms of Hip Hop, the perfect bombast of Fusion and the frenetic pacing of Indie Rock, all within the general context of Jazz. Comparisons to John Coltrane’s A Love Supreme are both appropriate and woefully inadequate; like David S. Pumpkins, Washington’s sprawling 3-disc introduction to the wider world, 2015’s The Epic, is its own thing.

Washington (who performed at last year's MidPoint Music Festival) did not suddenly spring from the head of Zeus two years ago as the fully formed savior of Jazz. The Los Angeles native graduated from Hamilton High School’s Academy of Music and Performing Art, winning the John Coltrane Music Competition in his last year there. He enrolled in the UCLA Department of Ethnomusicology, where he played with faculty members Gerald Wilson, Kenny Burrell and Billy Higgins before going pro. Early 2000s session-work credits include Ryan Adams’ Gold and Blackberry Belle by Greg Dulli’s Twilight Singers.

After an album with the Young Jazz Giants, Washington self-released his debut, 2005’s Live at 5th Street Dick’s, followed by The Proclamation in 2007 and Light of the World in 2008. During this period he also played with the Gerald Wilson Orchestra and did sessions with Herbie Hancock, Stanley Clarke, Snoop Dogg, George Duke, Nas, Harvey Mason, Raphael Saadiq and many others.

In 2015, Washington appeared on Kendrick Lamar’s landmark Hip Hop album, To Pimp a Butterfly, playing sax and arranging strings. Not long after Butterfly’s release, Washington dropped The Epic to almost universal acclaim. The album peaked at No. 3 on Billboard’s Jazz chart and earned a spot on a number of year-end best-of lists, with reviewers nearly breathless in their praise of Washington’s evolutionary and populist creation.

His Harmony of Difference EP came out in September, offering a briefer but still potent follow-up to The Epic, featuring compositions that were woven together in a suite written for an exhibit at the Whitney Museum of American Art’s Biennial 2017. The release is further evidence that, while Washington fits perfectly into Jazz’s historical lineage, he also deftly transcends the genre and is bound for legendary status within the broader framework of music as a whole.