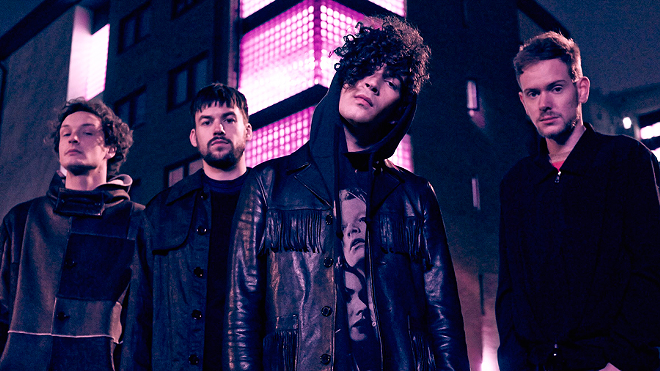 Photo: Roger Deckker
The 1975
Although The 1975’s recorded history began just four years ago, the band’s origins date back nearly a decade and a half. It was 2002 when a quartet of Cheshire, England high school pals embarked on a series of local gigs under a variety of names, including Forever Enjoying Sex, Me and You Versus Them and Talkhouse. When the group’s original lead singer departed for another band, drummer Matthew Healy — the son of well-known British actors Tim Healy and Denise Welch — strapped on a guitar and took over frontman duties, while drummer George Daniel joined bassist/keyboardist Ross MacDonald and lead guitarist/keyboardist Adam Hann in the lineup. The band took its name from notes jotted in the back of a Jack Kerouac poetry book dated “1 June. The 1975.”

The 1975 played primarily Punk covers until the members began writing their own material, which led to broader gig opportunities. Facedown, The 1975’s debut EP, was released in 2012 and featured the track “The City,” which garnered the group its first major radio exposure on the BBC. Follow-up EP, Sex, appeared the same year, resulting in more radio play for the title track and a UK/Ireland tour. The band’s eponymous debut full-length dropped in 2013; primed by the earlier release of the Music for Cars EP and the Top 20 success of the single “Chocolate,” The 1975’s first album entered the U.K. albums chart in the top slot and helped it secure tours of Europe, North America, Australia and New Zealand.

The 1975’s brand of ephemeral yet anthemic Pop Rock, as espoused on its first album and its 2015 follow-up, I like it when you sleep, for you are so beautiful yet so unaware of it, has clearly found favor among fans. Healy has used influences as broad as Talking Heads, D’Angelo, My Bloody Valentine and Sigur Ros to describe The 1975’s sonic texture, and the band has accumulated numerous award nominations over the past three years. But the dichotomous response to the band in its homeland is striking. In 2014, the Q Awards included The 1975 in the Best New Act category, while the NME Awards cited it as one of the Worst Bands of the year (they won the NME’s dubious distinction).

But the final vote clearly goes to the band’s fervent fanbase, which has ensured that a great many of its global tour stops are sold out. Perhaps it’s time to party like it’s The 1975.