Thousands of scientists and supporters gathered in hundreds of cities across the globe for the March for Science on Earth Day; The High Holidaze (aka 4/20) has officially gone corporate; Kid Rock, Ted Nugent and Sarah Palin walk into the White House... 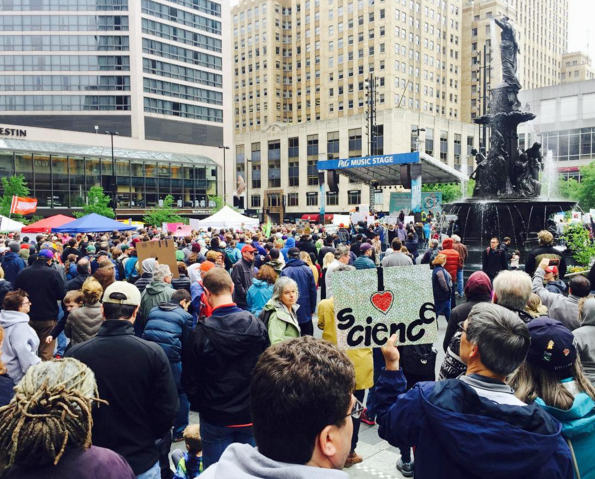 Kid Rock, Ted Nugent and Sarah Palin walk into the White House… It’s no joke: The hillbilly trifecta descended onto Washington this Wednesday after Donald Trump invited Palin to dinner and asked her to bring her best buds. Together they chilled in the oval office with Trump and took childish selfies in front of Hillary Clinton’s official portrait, which surprisingly wasn’t scrawled with a sharpie mustache and devil horns. This is exactly the type of stunt we’d get in trouble for on a grade school field trip. The Nuge spoke with Detroit Free Press about this get-together — perhaps a protest against this week’s March for Science? — and his description of  the group’s conversation topics is richer than any joke we could write, so here you go: “Rock ’n’ roll and hunting and guns and venison and energy and borders and military strength and Supreme Court justices and good food and pretty girls.”

Thursday was 4/20, or International Cannabis Appreciation Day, and boy did everyone get in the smoking spirit this year. The High Holidaze has officially gone corporate. Multiple police departments across the country took to social media to show off “weed traps” that included chips, donuts and video games to catch any potheads celebrating 4/20. Rapper and pot aficionado Wiz Khalifa dropped a “Weed Farm” mobile game. Spotify celebrated with a 4/20 playlist. And always ones to capitalize on chronic, Ben & Jerry’s served up “CHILLacos” — basically a Choco Taco on crack, err, weed  — in their Scoop Shops Thursday. The Most Woke on Weed Day award goes to Rachael Leigh Cook (She’s All That), who offered a modern take on the iconic “This is your brain on drugs” PSA. The original debuted 30 years ago, likening a frying egg to drugs’ effects on the brain. In 1997, an 18-year-old Cook smashed eggs — and en entire kitchen — with a frying pan to depict the effects of heroin. Twenty years later, Cook returned for another PSA, only this time calling out how the shitty war on drugs targets people of color (brown eggs).  Shout-out to the poor eggs that have been compared to druggy brains for 30 years now!

Serena Williams accidentally revealed that she is pregnant this week. A photo she posted on Snapchat and then deleted revealed the tennis star sporting a muscle-encased baby bump (or, how we look after eating a burrito, minus said muscles) with the caption “20 weeks.” Her rep later confirmed that Williams and her Reddit co-founder fiancé Alexis Ohanian, are expecting a tiny human. Days later, the Women’s Tennis Rankings announced Williams was yet again ranked No. 1 in the world. Oh, and if you do the math, she won her 23rd grand slam at January’s Australian Open while pregs. Everyone bow down. That’s amazing. Even more so: Beyoncé’s twins will have a lemonade-sipping friend for life!

Thousands of scientists and supporters gathered in Washington, D.C. and hundreds of cities across the globe for the March for Science on Earth Day. Because we live in a world where The Big Bang Theory is considered a humorous sitcom but a dangerous idea to teach in schools. Bill Nye “The Science Guy” was essentially king of the day. He, along with many other doctors, engineers and climate change activists, spoke about the importance of science-based education, research and policy. In fact, Nye dropped a new Netflix show Friday. Wait a minute… Do we sense a conspiracy? Was this all a plot to promote the Science Guy 2.0 show? Alex Jones, where you at? (Oh yeah, in family court, claiming his right-wing host persona is nothing but a performance art character.)

Unless you’re colorblind and without internet access (sucks to be you), you definitely know that Starbucks served “unicorn Frappuccinos” Wednesday through Sunday. The color-changing blended beverage looks like Lisa Frank barfed into a plastic cup, but it’s really just cream base, sparkly sprinkles and a shitload of fruity syrups. And — shocker! — people apparently have OPINIONS about the drink. Foodies and health nuts shunned the highly artificial calorie bomb while others were merely annoyed at the persisting “unicorn” trend, which covers everything from rainbow hair to multicolored toast toppings. The real crime here is that there are Starbucks drinks with no fucking coffee or caffeine in it.

America’s ex that we’ll never get over (and forever be creeping on his latest vacation pics) Barack Obama made his first public appearance post-presidency Monday, speaking at the University of Chicago on public service and community engagement. Not surprisingly, Obama avoided talking Trump, instead turning his attention to inspiring future leaders and delivering some dad jokes. We miss you, bb!

When political analyst Mark Halperin found himself in an odd seating situation on a Delta flight this weekend, he did what any reasonable person in 2017 does — politely request a flight attendant and, since it was in no way a big deal whatsoever, contact customer service upon his landing he tweeted about it. But Halperin wasn’t bumped to coach or given the stressful duty of sitting in an exit row (so much pressure!). He was seated next to an adorable doggo! If he was tweeting the posts as a means  to publicly complain — which he later said he wasn’t, he just felt bad that the pup was separated from its owner — Twitter wasn’t having it. Apparently, most folks would trade a human flying companion for a canine one in a heartbeat. Lesson learned: Don’t act like flying next to a sweet pup is anything but a luxury, or the internet will shame you. Elsewhere on Delta, Kenny G this week surprised his fellow passengers with an in-flight performance. See? Things could be much worse, Mr. Halperin.