‘Stranger Things 2’ Lives Up to Original

Season 2 is an emotional rollercoaster with the warmth of nostalgia, the terror of both supernatural scaries and real-life monsters and the relatable charm of friends worth fighting for. 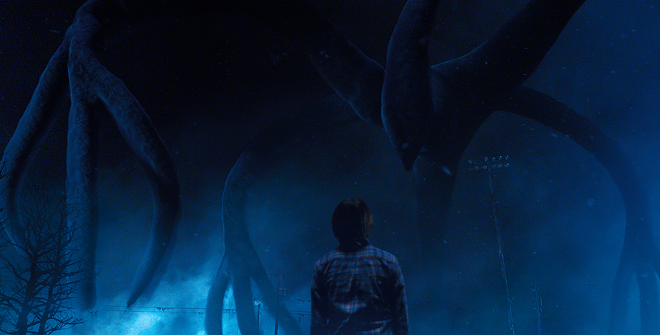 Photo: Courtesy of Netflix
Will (Noah Schnapp) with the mysterious Upside Down monster
Stranger Things (Netflix) took most of us by surprise when it debuted in 2016. A compelling and frightening romp through the 1980s Midwest and its treacherous parallel plane, the show highlighted a group of talented child and young adult actors — along with Winona Ryder in her first major television role — under the direction of the Duffer Brothers (who, unless you had watched Wayward Pines, you’d probably never heard of).

It was a perfect storm. Stranger Things made a huge cultural impact — everyone binged and talked about theories, countless Halloween costumes were crafted after the characters and it went on to get award attention. Who could forget Ryder’s expressive reaction during David Harbour’s acceptance speech? And who couldn’t relate to the Upside Down in the wake of the 2016 presidential election?

Questions abounded as the second season approached this fall. Can Eleven make her way back from the Upside Down? Will there ever be #JusticeForBarb? How does Steve maintain those gorgeous locks? But most importantly, could it possibly recapture the magic of Season 1?

In short, yes. Stranger Things 2 has that same unique spark that its first iteration did. It’s an emotional rollercoaster with the warmth of nostalgia, the terror of both supernatural scaries and real-life monsters and the relatable charm of friends worth fighting for.

This season picks up nearly one year after the events of last year’s finale. As teased in the final moments of that episode, Will is back home in Hawkins, Ind., but he’s not the same. His time spent in the alternate dimension known as the Upside Down has obviously deeply affected him, and he’s left with a sort of post-traumatic stress disorder that causes him to see terrifying things that aren’t really there. Or are they?

While Will’s disappearance is central to the Season 1 story, we actually didn’t get to see much of actor Noah Schnapp. He plays a much bigger on-screen role this time around, which is fantastic because Schnapp — having just turned 13, the youngest of the cast — gives a multi-layered, chilling performance.

In fact, all these young stars have upped their game even beyond their stellar first-season performances — Millie Bobby Brown (Eleven) and Finn Wolfhard (who plays Mike and also starred in the recent It reboot) are clearly destined for greatness. One of the best aspects of this season is the character development, particularly for some of last season’s secondary players. A group of such strong actors begs for complex roles, and this season we get to know Steve (Joe Keery), Dustin (Gaten Matarazzo), Lucas (Caleb McLaughlin) and others on a deeper, more fleshed-out level.

The same can’t be said about many of the new characters introduced this season, although Sean Astin shines as the lovable nerd dating Will’s mom Joyce (Ryder).

One theory that has followed Stranger Things since the beginning is that there are more children like Eleven — kids taken from their parents and experimented on at Hawkins Lab who have also developed special powers. Given her “name” and 011 tattoo, it would make sense that there was, at some point, at least 10 others, right? Season 2 immediately addresses this idea in the opening scene and returns to it several episodes later, before abruptly abandoning the storyline altogether. It’s one of the weaker plots in an otherwise satisfying season.

Stranger Things has been referred to as nostalgia bait, with some arguing that there are too many ’80s references and others claiming they’re not accurate. I think the show handles it with care in a way I haven’t seen since the short-lived dramedy Freaks and Geeks.

It’s not just the arcade games and Ghostbusters Halloween costumes and the tacky green Ford Pinto. Beyond the props and wardrobes, nostalgia is about a feeling. Regardless of the decade, everyone can relate to having your heart broken by your first love or mustering up the courage to ask a girl to dance. Stranger Things succeeds in those simple moments.

And in those moments, we’re reminded that underdogs can be heroes, jerks can be reformed and you can get through anything — from a school bully to a mind-controlling multidimensional demon — with a little help from your friends.