A Tale of Two Fringe Festivals: Edmonton and Cincinnati 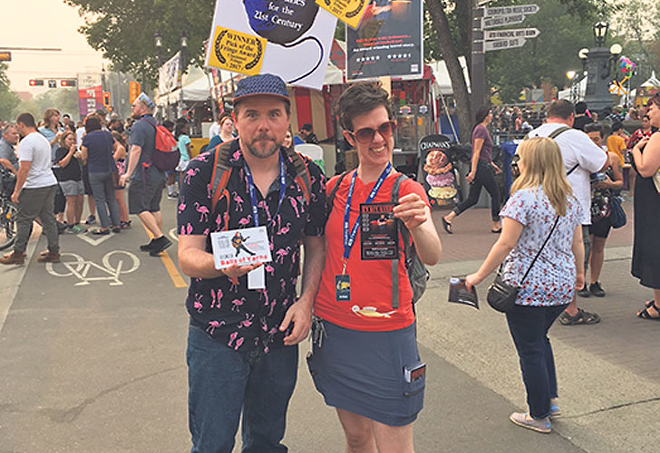 For many theatergoers, the Cincinnati Fringe Festival is a two-week affair, a whirlwind art blitz that wraps up in early June followed by a year’s rest. But for many participating artists, Cincy Fringe is the kick-off for a larger performance circuit that will take them to cities such as Edinburgh, Scotland and Boulder, Colo.

In August, I had an opportunity to experience two days of the Edmonton Fringe Festival in Alberta, Canada. At 37 years old, the Edmonton Fringe is the oldest and largest in North America — an enormous festival of over 1,600 performances in more than 45 venues.

Besides being a large and potentially lucrative festival, Edmonton Fringe is also scheduled between other large Canadian festivals, including Vancouver, Calgary and Winnipeg. This makes it an attractive route for traveling Fringe performers — among those are several that are familiar to Cincinnati Fringe audiences, including Martin Dockery (Moonlight After Midnight) and The Wonderheads (Grim and Fischer, LOON).

During my visit to Edmonton, I had the fortune to meet up with such Cincy Fringe participants as Paul Strickland (Balls of Yarns, Ain’t True and Uncle False, ExTrashVaganza!), Erika Kate MacDonald (Evacuated, which was performed in Cincinnati as Ice Candle; ExTrashVaganza!; Tales Too Tall for Trailers) and performing team The Coldharts, made up of Katie Hartman and Nick Ryan (Edgar Allan, The Unrepentant Necrophile, The Legend of White Woman Creek).

What brings Cincinnati’s Strickland and MacDonald and New York’s Hartman and Ryan thousands of miles to Alberta? The potential for revenue is an obvious place to start. Edmonton Fringe Festival — most Fringe festivals in North America, in fact — operate on a model that requires artists to pay heavy fees upfront. The artists then take home 100 percent of their ticket revenue. Considering Edmonton Fringe’s wide draw, earnings can be high. Strickland suggests he can earn three- or four-months’ income from a solid run in Edmonton.

“If a lot of things go well and you throw up your sail and the wind catches you, you can ride on that for a long time,” he says. “That’s a really important thing.”

Cincy Fringe’s model is different. Artists pay no upfront fee and they split their ticket revenue with the producer, Know Theatre. This can put a ceiling on the revenue a performer can bring in, but it removes some of the risk from trying out new works. As a result, Cincy Fringe is a good place to experiment.

There are other ways that this Canadian festival feels different from Cincy Fringe. For example, a central element of the Edmonton Fringe is a broad offering of free outdoor performances. Audience members can see talented jugglers, drummers and fire-breathers without ever shelling out for a ticket. The festival goes so far as to nickname these two types of audience: “Innies” and “Outies.”

“The outdoor component is a huge draw,” Hartman says. “Most people who are here for the outdoor festival are not necessarily here for the indoor performances, so that’s our opportunity to hopefully expand the audience for indoor.”

The other artists agree, suggesting the outdoor buskers create a pool of potential ticket-buyers who have already shown an interest in the performing arts.

From the curtain speeches to the post-show messages of thanks, individual performances in Edmonton felt similar to how they have felt in Cincinnati. However, it was a thrilling experience to watch shows such as The Coldharts’ Eddie Poe, a work that has passed through Cincinnati and clearly has now been revised and tightened.

These shows that travel are works in progress, each benefiting from on-the-road workshops with audiences whose tastes often differ. When MacDonald’s Evacuated played to a sold-out house in Edmonton, I had a sense of the years of testing, rehearsing and revising that have sculpted this show into one that now stands out.

The 37th Edmonton Fringe Festival, which closed on Aug. 26, marked the end of the summer Fringe circuit for many performers. Strickland and MacDonald are making their way home to Covington, Ky. As for The Coldharts, in order to return to Cincinnati, they will need to invent a brand new show.