Critic's Pick: A lively ‘Darkest Night at the Gnarly Stump’

Darkest Night at the Gnarly Stump is a gift to anyone who enjoys inventive theater. 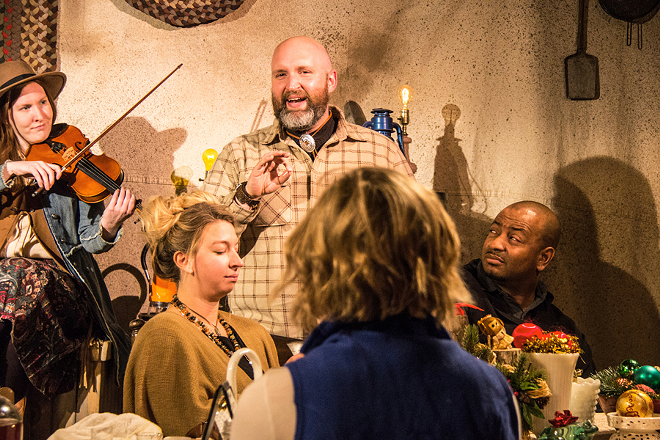 Most successful pitchers need to throw a change-up occasionally to be effective. If Know Theatre ever needs to take up something other than onstage work, the Over-the-Rhine company might consider a career on the mound. Current evidence: Darkest Night at the Gnarly Stump, a world-premiere play by Lauren Hynek and Elizabeth Martin.

When I first heard about this show — billed as a “musical ghost story” — I wondered what sort of unexpected entertainment it might offer. Know, the purveyor of Cincinnati’s annual Fringe Festival, prides itself on “keeping things weird” while serving as “Cincinnati’s playground.”

To sustain the change-up metaphor, understand that when you enter Know’s lower-level Underground bar you’ll feel like you’ve entered a very different place, even if you’re a Know regular. Designer (and Know artistic director) Andrew Hungerford has transformed the bar into the Gnarly Stump, an intimate, out-of-the-way pub where a few colorful regulars gather routinely to swap tall tales and banter.

There’s a long table with two rough-hewn benches for “The Everett Party” and a few café tables for some audience members. The bar itself is redecorated with jugs, accouterments and beverages typically found in a shopworn Appalachian drinking spot. Four cast members straggle in separately, almost as if they’re latecomers.

It quickly becomes apparent that they know each other and gather regularly as guests of Sheriff Everett (Michael Sherman), who has reserved the table at center stage. He begins a tale about his great-great-great uncle, who might or might not have murdered a ghost. But he’s interrupted by Silas (deep-voiced Derek Snow) who revels in hijacking others’ stories with side anecdotes or extravagant tales from his own imagination. Jocasta (Lisa DeRoberts) is more of a sharp-tongued realist; Elisha (Lormarev Jones) is quieter, but comes up with a few startling moments and insights.

Providing a musical tapestry are Paul Strickland and Linsey Rogers, he with a guitar and she a fiddle. They sing a handful of original tunes (Strickland has composed numbers that sound deeply traditional) and provide accompaniment and miscellaneous sound effects throughout. Director Brant Russell, who teaches drama at the University of Cincinnati’s College-Conservatory of Music, has staged the show using a smooth, steady build, and these musical moments add considerably to the 85-minute production’s flow.

An imperative story erupts with the arrival of an outsider, Kim (Lindsey Mercer), who bursts into the Gnarly Stump, animated and anxious because her sister Amanda (Gabriella DiVincenzo) has disappeared in the nearby woods. She went to explore a barn where there seemed to be a raucous celebration. The barn, the celebration and Amanda have vanished. Kim implores the storytellers, including Sheriff Everett, to form a search party immediately, but they put her off with stories about fairies, elves and other magical creatures and events, claiming nothing can be done until midnight when the “veil is at its thinnest.”

Kim is annoyed but gradually caught up by narratives that convince her that the bar’s patrons are not just repeating fanciful fiction. Desperate, she eventually offers her own tale about a traveling marble salesman lost in an Indiana cornfield. The play’s denouement unfolds from there with some intriguing revelations and Amanda’s eventual return. “You have to believe” is the message. The refrain for the closing number is, “May these stories live evermore among us!”

It’s a fascinating, inventive piece of theater. Strickland’s songs, most using three-part vocal harmony, add wonderful Appalachian texture. Hynek’s and Martin’s script provides illustrative tales that weave in and out of the present moment. These pitches — let’s call them change-ups — build toward the show’s climax, amplified by simple devices such as an unexpected blackout and flashlights.

Other than by being scheduled for late in the year, this is not a holiday show. But Gnarly Stump is a gift to anyone who enjoys inventive theater.