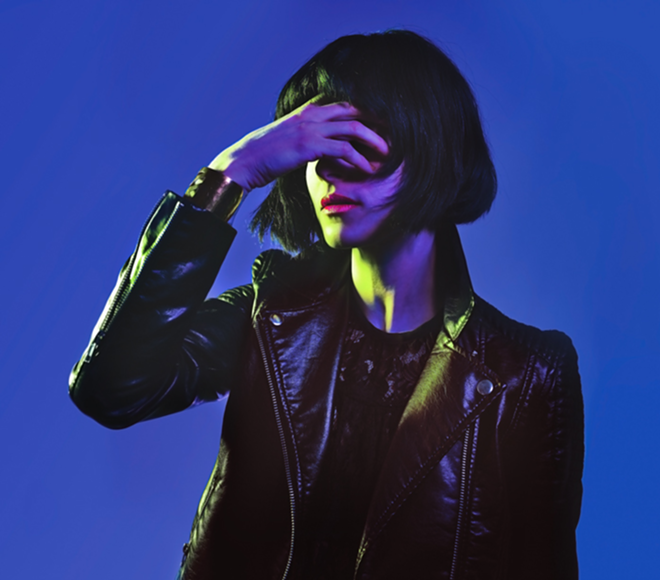 Liz Wolf’s musical rabbit hole isn’t for the faint of heart, coming on like Portishead with a slightly better disposition but no less emotional baggage. Using the name Dream Tiger, her 2013 full-length debut, SELF, is an impressively cohesive collection of textured electronic soundscapes, each anchored by her voice, which can be both piercing and narcotic, often within the same song.

Dream Tiger’s live show currently features Liz’s husband and musical compatriot, slanted Indie Pop band Why?’s Josiah Wolf; other members of Why? played in the band when it toured with of Montreal in 2014. What started as a one-woman project has grown into an evolving endeavor which the stylish frontlady describes thusly: “Now Josiah and I play as a duo again with drum pad, a really cool mish mash percussion kit for him and my Prophet 08 synth.”

The two met in Oakland, Calif., where Liz was initially friends with Josiah’s brother, Yoni, founder and frontman of Why? (which now features both Liz and Josiah). A move to Cincinnati a few years back solidified Dream Tiger’s formation.

CityBeat recently traded emails with Liz to get the lowdown on Dream Tiger’s origins, its intimate lyrical content and its debt to dance.

How did Dream Tiger come about? Were you always interested in pursuing music?

I’ve always been in love with music. I was too shy to sing in front of anyone until I was in my late twenties, but I sang along to my collection of Kate Bush records. My ex asked me to sing on a song of his and I couldn’t even let him within earshot. It turned out really beautiful as a result. After that, Yoni asked me to sing on “Good Friday” and few other songs for [Why?’s] Alopecia.

Dream Tiger came about rather naturally over several years. I first began writing songs on the guitar my dad bought me. Guitar is not my instrument. I would never be good at it, nor was I really interested in it. I prefer piano/keys/synths. I wrote and recorded on a little 4-track, acoustic versions of what would eventually, five or six years later, become my first record, SELF. [Josiah and I] toured together in the States opening for Phantogram and Why?, followed by a tour across Europe on our own. For those tours we recorded an EP called Under Lovers Covers.

After that, Why? went on a long tour and I bought Logic Pro [recording software]. It was very easy to figure out. By using MIDI instruments I was able to experiment with arrangements and slowly the songs found their sound. Josiah was gone for several months and I had our new house to myself in the middle of nowhere. It was a good recipe for either total isolated depression or pure creativity. I was fortunate enough to experience the latter.

Lyrically, many of your songs are presented from a first-person perspective, which makes them more intimate. How would you describe your approach to lyrics?

Lyrics are actually quite difficult for me. Though I consider myself a word-driven person, when it comes to writing them, I lack discipline. They come to me all at once or in tiny fragments and it’s really very elusive. I’ve had a fairly intense past and upbringing which is a real treasure trove of material. So even if I’m writing about something that may have happened in the past, I am very present emotionally, and I would guess that my lyrics reflect that. I feel something very strongly and it overwhelms me and that is when the lyrics come. I suppose I’m also not lyrically smart enough to change the tense to whatever I want. It stays where I put it and I don’t mess with them that much. It’s a goal of mine to be a much better lyricist. I admire people who can create the whole package musically. That is a bit rare.

I read that you have a dance background. How do you think that has influenced your work as a musician?

I took ballet from age 5 to 13 — I quit after I was on pointe for some time — and then came back to it from 15 to 18. I quit during puberty, which was a fatal mistake for when I returned. I also had changed priorities and only danced then out of habit and a way to keep myself doing something I loved. But I was not meant to be a ballerina. I had to many physical ailments and I didn’t have enough confidence left. I grew up with theater, film, photography, dance and music and all those elements are essential to my creativity. One doesn’t really work without the other for me. I’m very visual and I’m slowly adding more and more visual aspects to the live show. Dance is very influential to my music. When I record and listen back to a song I see the physical manifestation of the music. It’s maybe a form of synesthesia? I see a film in my head and that’s how I know the song is what it should be.

How has moving to Cincinnati from Oakland impacted your music?

I would not be Dream Tiger if I hadn’t left Oakland. Only in leaving was I able to begin making music and form myself. I am grateful to this city for being so receptive to musicians.