"Cheers to Five Years" features 30 cocktail recipes from the Coppin's staff and a sprinkle of mixology basics. 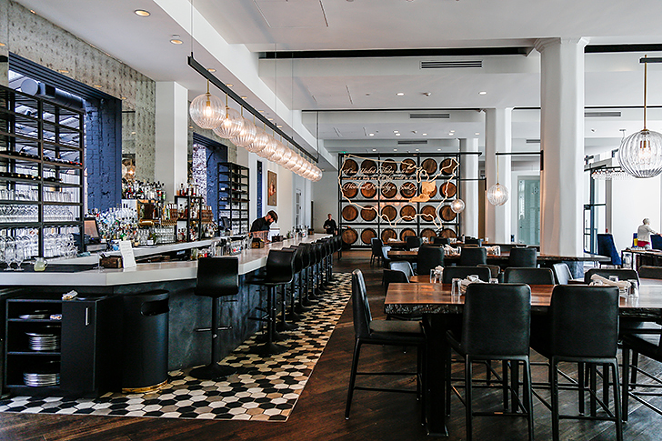 A mug of Liquid Knowledge at Coppin’s Restaurant & Bar in Hotel Covington is comprised of a lot more than just ginger, lime and bourbon. The mug itself, designed and created by Rookwood Pottery, represents a network of local collaboration that Hotel Covington works hard to maintain. One sip of the signature cocktail refreshes the palate, honors the history of the building and, as of September, celebrates five years of business for the hotel and restaurant.

“The most important, influential cocktail we have is Liquid Knowledge,” says Coppin’s Food and Beverage Director Megan Dillon. “It’s been here since day one, it will always be on the menu. John Coppin won big on the long-shot horse named Knowledge, which is the whole reason for this building standing here right now and essentially why we are in it. It’s important to give a nod to where it all began.”

The bar and restaurant is named after Coppin, who won a 100-to-1 bet on a horse named Knowledge 115 years ago; $33,000 later, Coppin purchased the empty lot on Madison Avenue and set out to construct Kentucky’s first modern skyscraper, Dillon says. Coppin’s Department Store opened in 1910 and served the neighborhood for almost eight decades. In 2016, the seven-story building was re-established as the boutique hotel it is today.

Coppin’s bar staff wanted to commemorate the anniversary in a way that revered its dedicated team while giving something back to patrons. Dillon, Culinary Bar Specialist Karen Puttmann and Food and Beverage Manager James Beddie didn’t need much time to consider how it could be done. The idea of an exclusive cocktail book was instantly conceived and roughly three months later, Cheers to Five Years — written by Puttmann and compiled by Dillon — was complete.

“For me, this book is for the young woman who called the bar from Denver two years ago and asked me for a recipe for a drink she had here,” Puttmann says. “It’s for the guest who is sitting in front of us asking, ‘What is in that bright green syrup you just added to that cocktail?’ And also, this is for us. This is for our team, a gift to ourselves and everybody who has ever enjoyed a cocktail here.”

Cheers to Five Years features 30 cocktails artfully inventoried among sprinkles of mixology basics. Careful instructions are listed so even a novice could build a drink, while elegant depictions of the hotel and vibrant cocktails complement the information. Photography was completed by local Amy Elisabeth Spasoff.

Coppin’s reimagines its selective drink menu seasonally through a collaborative research and development process. The entire bar staff comes together with ideas, picks their favorites and perfects the recipes down to every last ice cube and garnish. After five years of business and eight to nine cocktails per quarterly menu, Puttmann wrestled with nearly 200 options for the book. There was a finesse in the selection process, she says, to include different types of drinks while recalling specific recipes because of their unique names, popularity, dazzling presentation and, of course, taste.

“A cocktail is only as good as the way it’s presented to you,” Puttmann says. And for Coppin’s, the presentation is all encompassing. It is driven by ratios, stirs and shakes and steered by a show-stopping appearance. But it begins by luring a customer with innovative names, like the unfortunately everlasting Open the Roebling!, which mirrors the Roebling Bridge’s hue and boasts a berry-flavored, bourbon-based profile while begging whoever’s responsible for the closure of Covington’s beloved connection to Cincinnati to figure it out.

Puttmann says The Crack Sabbath is the most ambitious cocktail of the bunch (you need a torch to make it) and it just so happens to be her creation. She delights in concocting craft, one-of-a-kind syrups to inspire new recipes. A porter peppercorn molasses syrup daringly flavors The Crack Sabbath, which is then distinguished by an interactive, crystal sugar lid to garnish. Infused with Buffalo Trace Bourbon, an assortment of bitters and a few other ingredients, the drink is then smoked in a snifter with oak wood chips. The sugar lid traps the smoke and the guest cracks the lid to let the smoke slowly pour from the glass.

The book also offers a Coppin’s twist on standards like Coppin’s Old Fashioned or the flamboyantly bright pink take on a margarita called Perseverance. It’s important for each menu and for the book to appeal to the masses while “scratching innovative itches,” Puttmann says, and what’s offered is always a representation of the passion and talent of the people behind the bar.

Cheers to Five Years will be available for purchase at Hotel Covington and Roebling Point Books and Coffee in mid-to-late October. The team also has assembled an anniversary package for $120 that includes the book, a set of Hotel Covington etched and branded glassware and New Riff Distilling bourbon barrel pick exclusive to Hotel Covington. In addition, guests can look forward to a Braxton Brewing Company beer to be aged in the New Riff barrel and offered as an additional, celebratory drink on tap while supplies last.

Hotel Covington General Manager Justin Ham says some important milestones have been surpassed in the five years of operation, including Cheers to Five Years. He looks forward to achieving more accolades such as Trip Advisor’s 2021 Travelers’ Choice Awards, which ranks the hotel among the 25 best hotels in America.

“There’s an art to what we do,” Ham says “We are all here for one reason — that’s to take care of our guests, and we provide that autonomy for our staff to be able to feel like they can take the opportunity to create a tailored experience for each guest.”

As far as the next five years go, Hotel Covington is about to get a lot bigger — by 53 rooms, to be exact. Ham says since the purchase of the adjacent building, Hotel Covington North is underway with 12-15 months of construction remaining and plenty of new, luxurious plans to be announced. And if you ask Dillon or Puttmann, another recipe book isn’t off the table, either.