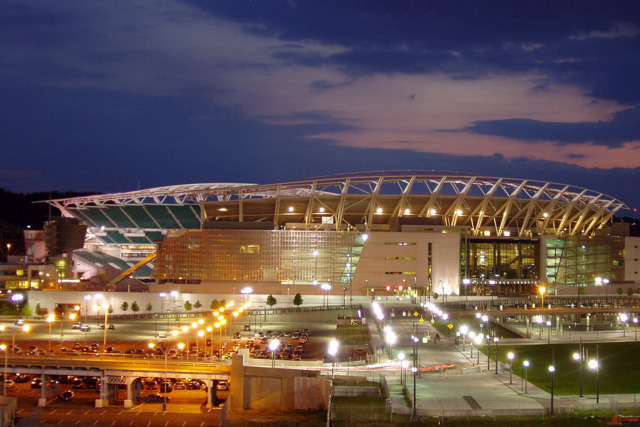 Sure, everyone gets a three-way today since the Cincinnati Bengals overcame the Jacksonville Jaguars last night. But four Bengals legends are taking away something that will last much, much longer.

Influential Bengals Paul Brown, Ken Anderson, Anthony Muñoz and Ken Riley were inducted as the inaugural members of the Bengals' new Ring of Honor during halftime of the Sept. 30 game in Cincinnati. The Ring of Honor recognizes former players, coaches and individuals who have significantly affected the franchise.

Brown was the founder and the first head coach for the Bengals (and the Cleveland Browns). During his tenure, the Bengals reached the postseason three times. He later became general manager and helped push the team to the Super Bowl twice.

Quarterback Ken Anderson led the Bengals to the team's first Super Bowl in 1981, the same year he won the NFL's MVP and passing titles. He played for 16 seasons with the Bengals, a franchise record.

Muñoz played for 13 seasons at left tackle and was inducted into the Pro Football Hall of Fame during his first year of eligibility in 1998. He contributed to two Super Bowls and was named NFL Offensive Lineman of the Year six times during his Bengals run.

Cornerback Ken Riley spent his entire career with the Bengals. He’s considered one of the Bengals’ all-time best players, with 65 interceptions — fifth-most in NFL history.

The Bengals announced the Ring of Honor program in April. An FAQ on the team's website describes what qualifies a person to be considered:

Brown and Muñoz were announced as inductees in April. Anderson and Riley were selected by season-ticket holders and suite owners from a ballot that was released later.

Thursday's Ring of Honor ceremony presented the inductees during halftime and included moving video tributes and the unveiling of their names on the east facade inside Paul Brown Stadium.

The Bengals beat the Jaguars 24-21 in a comeback victory.