Charles Dinn, Who Brought the Beast to Cincinnati's Kings Island, Passes Away at Age 88

In Cincinnati, Dinn is perhaps best known for overseeing the construction of The Beast, the record-breaking wooden rollercoaster that debuted at Kings Island in 1979. 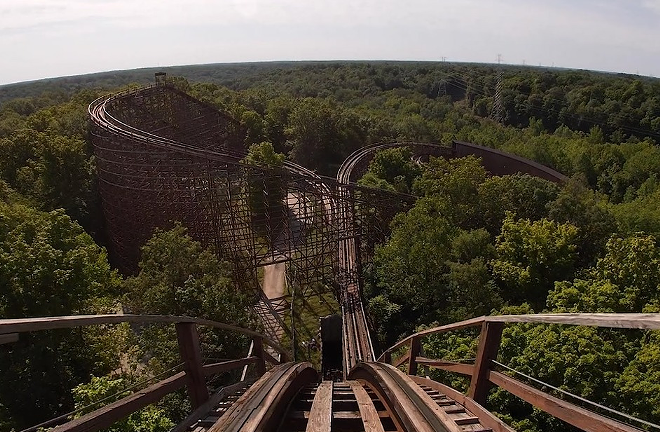 Photo: facebook.com/visitkingsisland
The view from the top of The Beast at Kings Island in Mason near Cincinnati.

Charles Dinn, who changed the roller coaster game forever when he introduced The Beast at Cincinnati's Kings Island, reportedly has passed away July 6. He was 88.

According to an obituary on the website for Brewer & Sons, a funeral home in Florida, Dinn was born on April 29, 1933, and is survived by his wife Martha, his daughter Denise, and his son Jeff, who lives in Wilmington, Ohio. He reportedly passed away in Clermont, Florida.

Dinn had a long career in the roller coaster industry, but he's perhaps best known in Cincinnati for overseeing The Beast, the record-breaking wooden rollercoaster that debuted at Kings Island in 1979. At that time, The Beast was the tallest, fastest and longest roller coaster in the world.

According to Kings Island's blog post, Dinn was the director of construction, maintenance and engineering at the time and oversaw The Beast's construction. The ride launched for members of the media on Friday the 13th that year and opened to the public the following day.

Since its creation, The Beast has been considered one of the world's best coasters, and it still holds the Guinness World Record for being the longest roller coaster made of wood. According to Wikipedia, well over 54 million people have ridden The Beast.

Dinn later formed a company with engineer Curtis Summers, with whom he had collaborated on The Beast. Dinn Corporation built and restored many coasters around the world, including the Mean Streak at Cedar Point in Sandusky, Ohio, and Raging Wolf Bobs at the now-defunct Geauga Lake in Aurora, Ohio, near Cleveland. Dinn also oversaw the Raging Rapids attraction at Kennywood near Pittsburgh, Pennsylvania.

After Dinn's retirement in 1991, his daughter Denise continued her father's legacy of building wooden roller coasters and other attractions by forming Custom Coasters International. CCS oversaw the construction of The Legend at Holiday World in Santa Claus, Indiana, and Hoosier Hurricane at Indiana Beach in Montecello, Indiana, among others.

As of press time, media representatives from Kings Island had not yet responded to CityBeat's request for comment.