By Maija Zummo and Danny Wicentowski 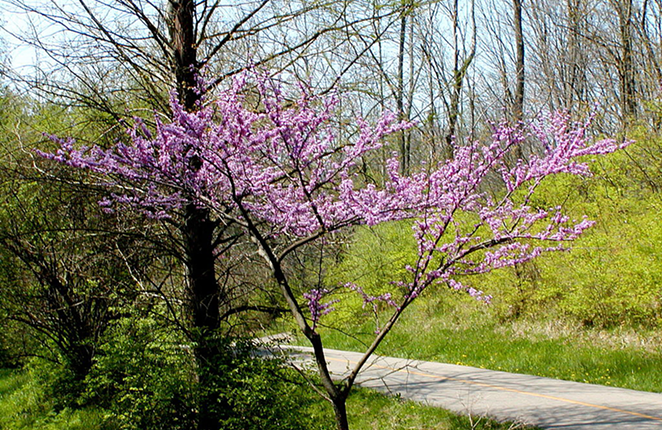 For the 33rd year, Cincinnati Parks is giving away free trees as part of its ReLeaf effort to help build the city's tree canopy.

The "tree canopy" is a term used to describe how many trees and how much coverage they provide in order to offset the "impacts of air pollution, urban heat island effect, residential energy demands and storm water management," says Cincinnati Parks.

"Just one large canopy deciduous tree, such as an oak or sycamore, can help control 400 to 1,000 gallons of stormwater through canopy interception. This benefits homeowners by adding shade, beauty, reducing soil erosion, and managing flooding from rainfall."

Cincinnati Parks' goal is to get every neighborhood in the city to a 40% canopy coverage. Last year, it was at 38%, according to the Cincinnati Park Board's Division of Natural Resources.

In August 2020 the city's Office of Environment & Sustainability evaluated Cincinnati's trees and how their existence — or lack thereof — was impacting the heat index in area neighborhoods.

The report showed just how hot things can become in the region’s “heat islands," which, when mapped, starkly overlap with lower-income neighborhoods and areas with larger Black populations. The region’s hottest areas featured roadways “with sparse vegetation,” the report noted, while tree-shaded neighborhoods “keep neighborhoods cool during summer heatwaves and lower the risk of heat-related illness for residents.”

And the neighborhoods with minimal tree canopies are the ones that Cincinnati Parks is first highlighting in its tree giveaway.

Applications for all other Cincinnati residents open at 8 a.m. Sept. 4.

Planting must follow specific guidelines. Cincinnati Parks says it is ideal to place a tree in your backyard as well as "in community entryways, street triangles, areas near street intersections and public frontages along major streets."

See full planting guidelines on the registration page at cincinnatiparks.regfox.com/releaf-application.

Trees available for free this year — via a partnership with MadTree Brewing, Macy’s and the Cincinnati Parks Foundation — include the Eastern Redbud, Sugarberry, Tuliptree, Swamp White Oak, Baldcypress, Red Maple, Allegheny Serviceberry, Pawpaw and Blue Beech. Descriptions of each tree and its needs are available at cincinnatiparks.com.

While the Office of Environment & Sustainability's 2020 report itself and press briefing described the heat distribution as “inequitable” and “disproportionate,” the actual context of the imbalance is only hinted at. While tracking heat islands, the 2020 heat map was visibly similar to those that track the city’s demographics, household income, and history of redlining.

The lack of a tree canopy in lower-income and urban neighborhoods is not an uncommon issue.

In 2018 the city passed a version of the Green Cincinnati Plan with components woven throughout to help the city adapt to changes in weather patterns and equity efforts to attempt to keep the city’s most vulnerable residents from bearing the brunt of the burden. One of the major resiliency recommendations: increase the city’s tree canopy to shield communities from ever-increasing heat in the summer and to soak up water from those massive rainfall events.

Cincinnati Parks has received grants through the Ohio Department of Natural Resources to monitor canopy coverage every 10 years and contract geospatial services.

"In Cincinnati, this information has been used to guide focused planting efforts where trees would be most beneficial to address environmental issues like excess heat and storm water," reads a release from last year.

This information, along with a detailed analysis of air quality issues, "will be put to work to develop and implement targeted planting plans in communities with the greatest need," said Cincinnati Parks.

For more information or to request a free tree, visit cincinnatiparks.com.