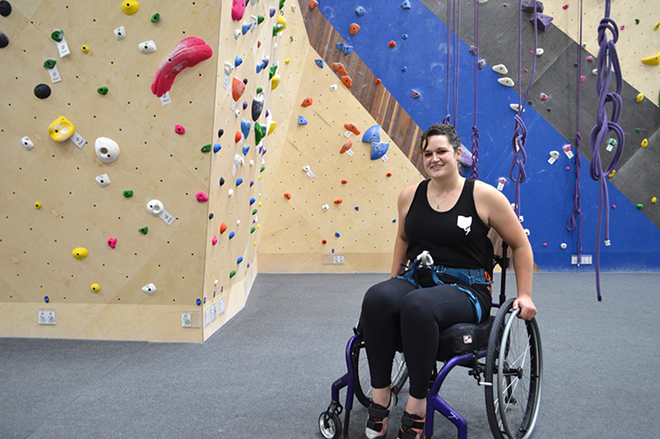 On any given day at Climb Time Oakley, Caroline Winstel can be found surveying the gym’s 40-plus-foot walls, studying color-coded routes, or checking tags at the base of each climb while noting its difficulty level. Like many rock climbers, she might plan out a few moves before she even touches the wall; head up, neck cranked to one side, chalky hands above her head mirroring movements required for the sequence above — like climbing an invisible ladder.

There is one thing about Winstel that sets her apart from other climbers at Climb Time, but when she’s on the wall, you’d never notice. Below her ascent, where daisy-chained ropes hang and chalk scatters, a wheelchair waits to meet her. Depending on the day, her descent could mean a skillful and controlled downclimb or an unexpected, muscle-cramp-induced fall.

Either way, Winstel’s positivity and jocular nature persist as she unclips from the auto belay system or unties a figure-eight knot from her harness. She often retreats to the center of the massive gym, where everyone congregates between climbs. Sharing “beta” (climbing jargon for tips and tricks) with friends or just taking time to rest, she typically lays down and props her legs up on her wheelchair to regulate blood flow.

Winstel has an acquired physical disability that manifested when she was 18. Growing up in Knoxville, Tennessee surrounded by adventurous opportunities, she has always been athletic, but not always a climber. She was a volleyball player her whole life and achieved collegiate athlete status at Tusculum University in 2007.

“First day of college pre-season I collapsed,” she says. “I get rushed to the hospital. Turns out I have Rhabdomyolysis (a syndrome caused by dead muscle fibers being released into the blood stream); my muscle enzymes were so high I should have died. It was a really weird experience because my doctors didn’t even know what it was.”

Winstel says she was handed a printout from WebMD, and shooed away.

After confusion about never being able to get back into playing shape, unsupportive coaches and unhelpful doctors, she says she spent a lot of her early 20s without answers, really trying to fill this new gap in her identity.

Winstel made the move to Cincinnati seven years ago, where she studied history at Northern Kentucky University and also where doctors at University of Cincinnati Medical Center uncovered more to her diagnosis.

“We found out I also had a couple other things: hypermobile Ehlers-Danlos and postural orthostatic tachycardia,” she says. “My autonomic system didn’t function very well and then my joints and connective tissue also said, ‘Hey, let's join the party!’”

Winstel is modest but her personality is full of humor and pleasantly loud.

“Basically my mitochondria are not the powerhouse of my cell,” she says with a laugh.

She proudly explains that she began owning her identity when it became something she wasn’t trying to push away anymore. She also soon realized trying to actualize her life without sports wouldn’t last long.

Currently, Wistel is a part-time Jewish educator, a wife, a proud aunt, a poet, a photographer, works a full-time job and is focusing on obtaining a Master’s Degree in experiential Jewish education at George Washington University. In addition, she’s a doctoral student at NKU, where her research piqued an interest in individual adaptive sports, leading her to explore Climb Time.

So last August, Winstel came into the gym as a researcher and left as a climber. It wasn’t something she was expecting to fall in love with, but she credits the environment at Climb Time heavily for facilitating her newfound passion.

“It was one of the first places I went that I wasn’t judged,” she says. "I’ll be in spaces in the real world where people will, like, pet me or be like, ‘She is so cute in her little wheelchair.’ But at Climb Time, I don’t get that. Everyone just kind of supports you.”

USA Climbing's Paraclimbing National Championships weren’t on the radar at first, Flenner says, but Winstel developed extreme goals like climbing outside, lead climbing (a form of sport climbing that involves clipping the rope in as the climber ascends as opposed to the rope already being strung), and completing routes rated 5.10. Flenner happily assumed the role of Winstel’s coach and belayer (the person who ties into the opposite end of a rope and feeds or takes slack for the climber as needed) and was the first to encourage her idea of competing at Nationals.

Sport climbing involves grading routes on a scale that starts at 5.0. Anything beyond a 5.8 is intermediate and 5.11 is considered hard (very hard). While these grades are surely a mark of progression, Winstel isn’t too concerned with the numbers. She might even be the last to tell you that she can successfully complete a 5.10, a long way to come after struggling on 5.6 routes in August.

“Almost everybody in the gym knows Caroline,” Flenner says. “Their faces light up if you mention her name. She leaves such an impact on people because of her bright personality.”

After competing in the Paraclimbing National Championships in June, Winstel might have to get used to recognition as more than just an outstanding member at Oakley. Salt Lake City hosted a two-day competition June 19 and 20 that offered open registration and a chance to place for the 2021 Paraclimbing World Cup, which Winstel only missed by half a point.

On the first day of Nationals she placed third, and at the finals she placed fourth. Winstel is proud of competing regardless of the outcome. And she’ll continue to climb and compete to show others with disabilities that it’s possible.

“If one thing came out of all this, I’d love to be sitting at Climb Time and have another adaptive climber walk in,” she says. “I’d love to see folks living with disabilities feel at home in a climbing gym.”

Winstel admits that in a lot of ways, climbing gave her her life back. One of her recent doctor visits was the first in two years that didn’t end with more medicine or restrictions.

“That made me feel like what I was doing mattered and that I have some kind of control," she says. "Living with chronic conditions, there’s not a lot in your control, but to know that what I’m doing is making an impact and maintaining a baseline, that’s huge for me and it makes me feel like I have power back in my life.”

Winstel took an even greater, newfound confidence from Nationals and ticked another goal off of her climbing list. She climbed outside in Little Canyon, Utah directly after the competition and noted that the entire experience had forever changed what she thought was possible with her body.