Dr. Amy Acton Announces She Will Not Be Running for Rob Portman's U.S. Senate Seat

In a prepared statement to the press, Acton said she is taking a step back from public life as she considers her next chapter 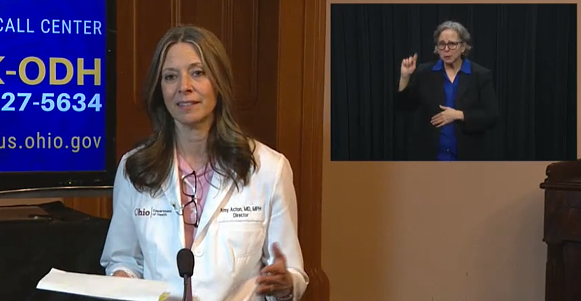 Photo: The Ohio Channel
Dr. Acton during a COVID press briefing in March 2020

Former Ohio Health Director Amy Acton, who presided over the state's early rapid decline in coronavirus cases and served as both science teacher and soother-in-chief during daily press briefings alongside Gov. Mike DeWine, announced Tuesday that she will not be seeking the U.S. Senate seat to be vacated by Rob Portman.

In a prepared statement to the press, Acton said she is taking a step back from public life as she considers her next chapter, but wants to celebrate the courage, compassion and resiliency of all Ohioans.

"While I am not entering the race for U.S. Senate, I recognize there is a genuine longing for a fresh approach to leadership that is honest, collaborative and empowering," she said. "Ohioans — do not accept anything less from your elected officials. Our leaders' words and actions matter. We must set the bar higher."

She said that as Ohio emerges from a pandemic that has touched everyone, we must endeavor to create a state that "ensures the enduring cultural values of kindness and justice for all."

Acton, whose star rose during the spring of 2020, resigned from her post late in the summer, as DeWine prepared to ease health restrictions and as opponents to the state's shutdown protested outside her home.

She took a job at the Columbus Foundation, where she'd been employed previously, as the director of a kindness initiative.

In the Ohio Senate race, she was pegged by many as a potential strong candidate in the Democratic primary. Without her in the race, congressman Tim Ryan is the only serious candidate, for now, on the Democratic side.

The Republican primary, on the other hand, is bursting forth with new entrants. Tuesday morning, Northeast Ohio luxury car dealer Bernie Moreno threw his hat in the ring.