From ramen pop-up to permanent storefront 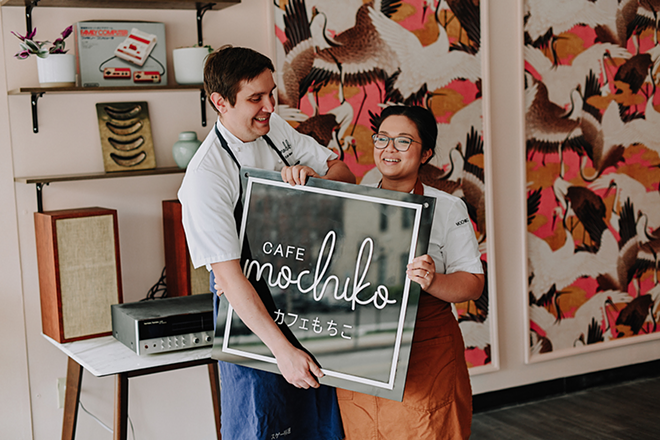 In what’s been a turbulent 12 months for the restaurant industry, it’s refreshing to get some good news from a flourishing culinary team that was just planting its roots in Cincinnati before the pandemic. Mochiko, a Japanese-style pop-up run by Elaine Townsend and Erik Bentz, is getting ready to open the doors to its restaurant in East Walnut Hills; a takeout window is already open.

A brick-and-mortar location has always been a part of the couple’s long-term plan. Back when CityBeat first featured Mochiko in August 2019, Townsend said, “Ultimately our endgame is to open up our own place, but right now we’re just putting our name out there.”

And put their name out they did, with the same enthusiasm and attention to detail that they put into their remarkably inventive, yet familiar, sweet and savory dishes. When COVID hit, Mochiko focused all of its energy on delivery and carry-out, preparing yoshoku-inspired pastries, meals and ramen kits. But the restaurant was always the next step and they never lost sight of it.

Yoshoku is a culinary style that incorporates Western recipes with Eastern ingredients and sensibilities; one of Mochiko’s most localized takes on the concept is their Cincinnati-chili-style ramen. The ramen is a serene confluence of earthy spices from the pork chili (vegetarian option forthcoming) and the delicate umami-packed savoriness of the broth, served with a chili-marinated egg, onion and topped with a mound of shredded cheddar.

“2020 was a huge curveball, but it gave Elaine and I the opportunity to work together full-time,” Bentz says. “Before the pandemic, I was working at Boca and I really didn’t get to commit the time to Mochiko that I wanted to. When I got laid off, it forced us to adapt to the current situation and figure out a model that worked. For example, with Elaine’s pastries, they translate so well to delivery and takeout because you don’t have to worry about time and temperature sensitivity while they’re being delivered. Honestly, we have just been very grateful to be able to work this year.”

In the pop-up days leading up to the acquisition of a permanent restaurant, all of Mochiko’s cooking and baking was done at the Incubator Kitchen Collective in Newport, a nonprofit organization that provides kitchen space for burgeoning culinary entrepreneurs. Mochiko now operates in the storefront previously occupied by Mardi Gras on Madison, a Cajun/Creole restaurant that closed down shortly before the pandemic. And that’s where their restaurant is located.

“We have been looking at the spot for over a year now and there have been so many roadblocks, so much paperwork, so many phone calls with banks and Board of Health employees,” Bentz says. “We felt like it was a nice, comfortable spot between downtown and the suburbs. Going all the way downtown can be a pain sometimes; it feels like a spot that guests can casually get to. The neighborhood has been great so far, we ended up on a cute corner near Branch and O Pie O — we’re excited to have them as neighbors.”

The plan for the restaurant is to offer pastries and light lunch fare in the morning, then lean more toward an izakaya model for dinner (an izakaya offers casual, shareable Japanese bar food comparable to Spanish tapas). Until all the paperwork settles, Mochiko will operate as BYOB, but the future holds beer, wine and sake to pair with the plates.

“A lot of the hits will be the core of the menu, but we are trying to build some items that would do very well as takeout,” Bentz says. “One new item will be the Hokkaido Smash Burger, something similar to an Oklahoma onion burger and served on a steamed Hokkaido milk bun.”

While most of Townsend’s pastries rely on natural dexterity with her hands, Bentz acquired machines to aid in the mass production and preparation of Mochiko’s noodles.

“The noodle machine was originally from Osaka, and I tracked it down in Chicago and brought it back to life,” Bentz says. “It is my baby.”

A video on Mochiko’s Instagram (@mochikocincy) shows the rhythmically hypnotic process of the machine automatically cutting fresh noodles from a massive coil of raw, homemade dough sheets. After the noodles have been cut, they are ready to take a bath in boiling water. This is where a seemingly innocuous device like a noodle boiler shows Mochiko’s strong connection to ramen’s heavy hitters.

“The noodle boiler is a simple four-basket machine made by Maruzen, but it was given to me by Keizo Shimamoto. It was used for years at Ramen Shack in New York — some would say the best (ramen) shop in the U.S.,” Bentz says. “The history of the machine is far more significant than the machine itself.” 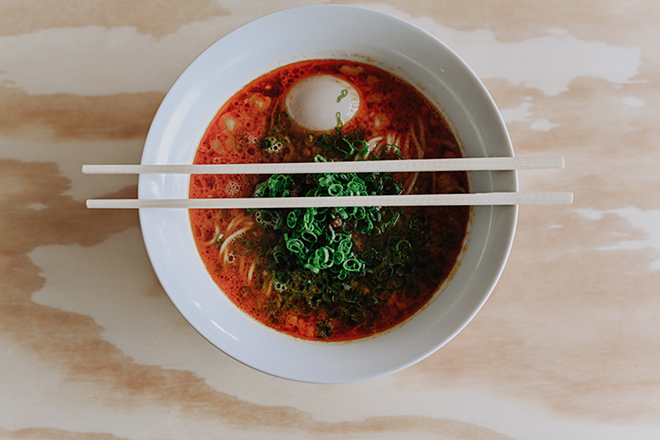 Ramen Shack closed its doors two years ago, but Shimamoto’s name still demands the utmost respect from ramen aficionados. Shimamoto supplied Mochiko with noodles when they first started having pop-ups in Cincinnati; Bentz deduced their ramen was the only way to eat Shimamoto’s noodles outside of New York City.

But it’s not just the noodles that are important in a bowl of ramen — these other components are essential in completing a bowl: slowly simmered broth made from pork or chicken bones (depending on the type of ramen); tare (tah-ray), which provides salinity; and aroma oil, which not only flavors the soup, but also helps the broth bind to the noodles in the most satisfying way possible. All of this is capped with an array of toppings such as pickled bamboo, dumplings, marinated eggs, sliced green onion… the list is inexhaustible.

Curious how much soup and noodles Mochiko considers a proper bowl of ramen? The typical bowl, according to Bentz, should have 350 milliliters of soup and 140 grams of uncooked noodles.

“Sometimes we go a little larger, but we won’t be making anything smaller than that,” Bentz says. “Smaller portions can be great for snacking, but they just don’t feel and eat the way we want them to. We want you to finish everything in the bowl and feel full but not stuffed.”

Don’t fill up on dinner, because Townsend’s sweets are highly sought after. (Just look at the response to Mochiko’s almost-always-sold-out “Sunday Sweets “ bake sale.) Patrons will be able order a wide array of pastries like strawberry cream melonpan, Ferrero brownies and sobacha chocolate chip cookies, along with savories like katsu sando, a kimchi and egg croissant, or just a straight up loaf of perfectly square shokupan milk bread.

The restaurant’s finishing touches are near completion. At the time of this writing, Mochiko is very near to opening its doors to the public — the eternal plight of government paperwork seems to be the only hindrance.

“The vibe is going to be cute and casual during the day, and getting slightly more upscale-casual at night,” Bentz says.

“It feels pretty surreal that it is actually happening. No big investors or backup, just two kids doing everything they can to fulfill a dream.”