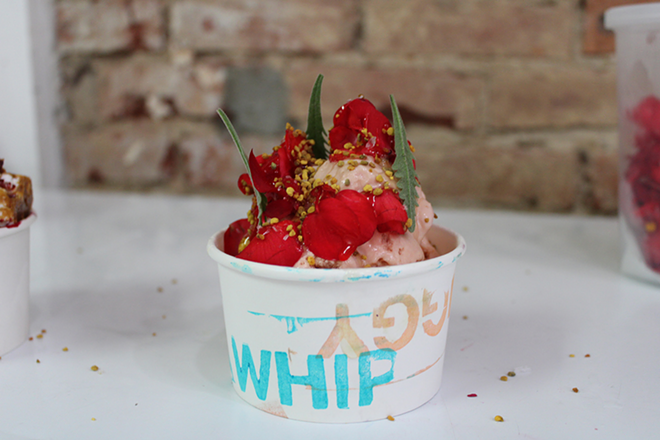 David Jackman was sitting at the bar at Collective Espresso in Over-the-Rhine when he got wind that the nearby The Takeaway was reopening.

The Main Street deli and bottle shop had been hibernating for the winter and opened up again at the start of this summer. Since its inception, The Takeaway has doubled as a home for pop-up restaurant concepts via its walk-up window on Woodward Street (e.g. Boombox Buns, Pata Roja Taquería).

With that in mind, Jackman asked The Takeaway if he could run a restaurant out of the window and shortly thereafter opened Ziggy Whip, the city’s newest creamy whip and certainly the only one to offer “handies” — Ziggy-speak for hand pies (get your mind out of the gutter).

Jackman works alongside his wife, Lydia, as well as Ethan Bartlett. The trio has decades of culinary experience between them and the résumés to show for it. Prior to starting up Ziggy Whip, Lydia ran the foodservice at Oakley Wines and The Rhined, Bartlett was at Sleepy Bee and Jackman was the sous chef at the now-shuttered Please. Now, they’ve combined their expertise to bring their own concept to life.

“We didn’t want to just start working in other restaurants and keep putting our ideas to the side,” Jackman says. “We had been working in enough restaurants at this point that we just wanted to work for ourselves.”

With a go-ahead from The Takeaway, the world was their oyster. The team shares a love of ice cream (the seasonal Putz’s, near Northside, is unanimously their favorite), and opening a creamy whip came up while brainstorming restaurant concepts — but certainly not one that would blend in with the rest of the city’s offerings.

They wanted to set themselves apart from the usual ice cream shack lineup by offering “savory things and fun ice creams that are different from a normal whip,” Jackman says. 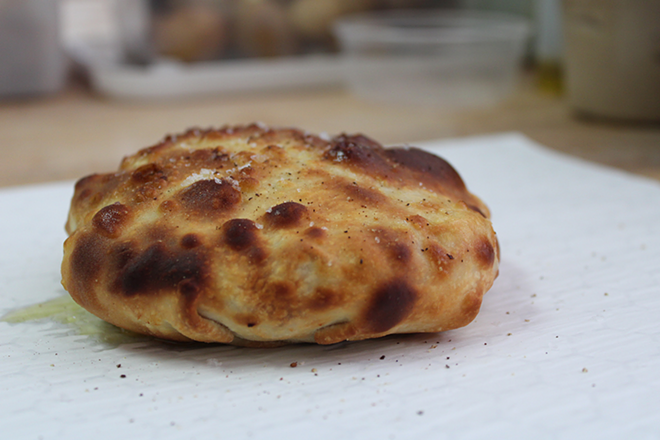 Most creamy whips around the city offer food of the concession-stand variety — coneys, hamburgers, walking tacos — but Ziggy Whip offers “beautiful adult hot pockets,” Bartlett says. “They’re delicious and fun and not something you can get elsewhere.”

They’re made with an olive oil crust, which provides a unique texture that is neither flaky nor doughy. And unlike pastries with butter or lard crusts, they’re easily veganized.

In fact, vegan options abound at Ziggy Whip. One of the two weekly handy options, the sorbets and the side of vegetables — which Jackman calls the unsung hero of the pop-up — will always exalt local produce and remain plant-based. Recently, bite-sized chunks of summer tomatoes were bathed in a whipped tofu and yuzu sauce and adorned with dill flowers, shiso and slivers of fresno chilli. Now that is a side of vegetables.

Like everything else on the menu, the hand pies reflect whatever seasonal goodies are available locally. A few weeks ago, Lydia tapped into her Tennessee roots and whipped up a vegan tomato pie with chickpea, olive, basil and a sunflower dip. Hand pies are $11 and come with a sauce to salve your singed taste buds. Just like all other pocket pies, these hold their heat with a death grip and you’ll struggle to muster up the patience to wait until they’re properly cooled to dig in.

More impressive than their ability to muster up a brand new menu chock full of intriguing, even off-the-wall flavor combinations is Ziggy Whip’s ability to tempt omnivorous guests into abandoning their usual orders and opting for equally enticing vegan dishes.

“We can’t just do self-serving flavors because we’re in the hospitality industry and part of hospitality is taking care of people,” Jackman says. “It’s about giving people the option to go the other route.”

The same goes for the scoop list, which is half ice cream and half sorbet and features flavors that are both approachable — vanilla, blackberry, dulce de leche — and distinctive — Angostura bitters, galia melon and bay leaf, one of the most captivating flavors thus far. The bay leaf scoop is a calming green hue you’d expect to taste like spearmint. Instead, it’s herbaceous and fruity yet reminiscent of cold-weather comfort food.

When concocting new flavors the trio asks themselves, “How can we make something as familiar as we can while still playing with all the things in the palate of seasoning?”

You can experience any flavor as a standalone scoop or a select few weekly flavors in sundae form. Scoops default as doubles — $5 for a cup, $6.50 for a buckwheat sorghum waffle cone (not vegan). They’re nutty and a little salty thanks to the buckwheat, but they’re also rich and slightly sweet because of the sorghum. You get all the crispiness without the lacerations on the roof of your mouth thanks to bread flour, which has a higher protein content and gives the cones their solid, yet giveable structure.

If cones aren’t your thing, you’re vegan, or you’re feeling like embarking on a culinary journey, opt for a sundae for $7.50. Just don’t expect simplicity. In fact, it’s best that you leave all expectations at the door, er, window.

They allow themselves unhinged culinary exploration within the bounds of a simple menu that they rework weekly. You can expect to get handies, ice cream and a side of vegetables, but you’ll have to wait to find out which varieties until they drop the new menu on Instagram (@ziggy.whip.pop).

Similarly, the Ziggy Whip owners follow the same menu design format, but swap out certain elements, echoing the simplistic but unique offerings. Drawing from Jackman’s adolescent years spent in the Punk community, where the abuse of the library scanner/copier gave way to a stack of show flyers, the Ziggy Whip menus are equal parts ransom note and Punk show poster.

“Inspiration for the brand came from attempting to avoid the aesthetic of common brands,” Jackman says. “We wanted it to stand out but also have a DIY aesthetic without feeling cheap. I wanted the project to feel like it had the same community-driven feeling I grew up around.”

In the future, the team plans to pack their ice cream into pints and sell them around the city. For now, they’ll be your weekend warriors to sate that craving for something new and unexpected but comforting and delicious at the same time. “We’re finding ways to keep the theme of fun new flavors,” Jackman says. “Keeping it very exciting and fresh and not really the same as anywhere else.”

The team also has been working on a restaurant concept called Malus for nearly a year. It will fall under the same ownership umbrella as Ziggy Whip, but the only thing the two restaurants will share is “an ethos of seasonality and quality,” Jackman says.

He says Malus will be a “neo-bistro concept based around an experience of breaking bread. Whether it’s a casual bite or an extended menu shared among friends, we’re trying to rewrite what high-end food is in a more casual way without removing the caliber, just removing the pretension.”

They haven’t set an opening date for Malus, but it’s on the horizon. “We’re trying to find the right space for it, the right funding,” Bartlett says.

Ziggy Whip is located at the walk-up window in The Takeaway on Woodward Street in Over-the-Rhine. They’re open Friday and Saturday. For more info, hours and menus, visit instagram.com/ziggy.whip.pop.