Here's the play-by-play of how Andrew Brenner tried to use an "office" background to fake what he was doing. 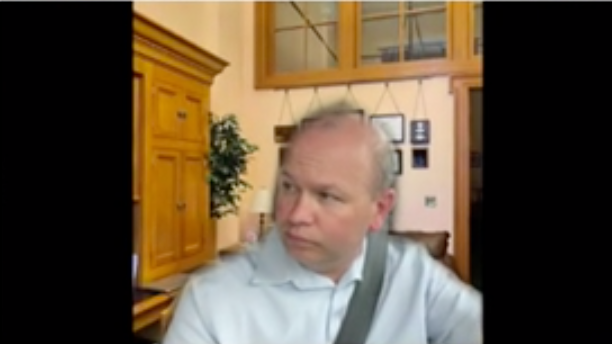 A state senator from Ohio seems to be uninterested in setting a good example for attentive driving.

Andrew Brenner, a Republican who serves Ohio Senate district 19 (Knox, Delaware and part of Franklin counties), took part in a May 3 virtual meeting for the Ohio Controlling Board, which handles state budget considerations. Board members met virtually to help keep COVID-19 transmission at bay, as many of us still do. Most meeting participants appeared from their home offices.

Brenner, though, was in a car. And at some point, he began driving and fussing with his phone, all on the same day that the Ohio House of Representatives introduced legislation that would ban drivers from using their phones while on the road.

The state senator began the meeting in a parked vehicle, as seen in the center box on the Ohio Channel's feed of the gathering. A few paper shopping bags were in the seat behind him. Brenner was stationary, he was not wearing a seatbelt and he even crossed his arms while looking at his phone that was perched somewhere on his dashboard or windshield.

Brenner clearly was parked in the screengrab below, which is great. Many of us have taken virtual meetings while waiting in a parking lot, because having long phone conversations or Zooming while driving is unsafe.

Image: The Ohio Channel video still
Andrew Brenner, center, is parked at the beginning of the meeting.

But then something strange happened.

At around the 1:50 mark of the feed, Brenner reached for the phone, flipped it toward the ceiling of the vehicle and then turned off his camera, as shown in the screengrab composite below.

Image: The Ohio Channel video still
At around 1:50, Andrew Brenner grabs his phone and turns off his camera.

Brenner reappeared around the 2:32 mark of the meeting's feed, pulling the phone to him and giving us a long view up his nostrils. He then moved his fingers about, as if fiddling with phone settings. He appeared to take an unintentional flash selfie at 3:28.

At this point, he was not wearing a seatbelt and still appeared to be parked.

Around 3:32, Brenner switched his background to a home office view while still sitting in his vehicle before cutting his camera again at 3:40.

But he returned at 4:20, this time wearing a seatbelt, turning the steering wheel and looking to his left and right. At around 4:24, you can see the background above his fuzzy outline shift, indicating that he was driving. Brenner drove for a bit, wiped his nose, stared at the screen, and then reached over to cut the camera yet again. 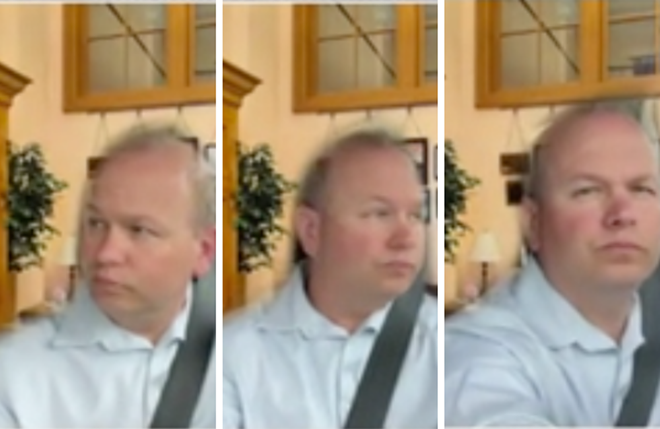 Image: The Ohio Channel video still
In front of a fake office background, Andrew Brenner wears a seatbelt and looks both ways while driving before turning his camera off.

Brenner rejoined the meeting at the 5:13 mark, still wearing a seatbelt and very obviously driving now. The background continued to shift and flicker, and trees, buildings and other cars were frequently on view as Brenner drove past them. He periodically sipped from a beverage in a large plastic fast-food cup.

When Controlling Board President Fletch Zimpher asked the group if there were questions, Brenner gave his head a Seinfeld-esque shake and continued driving. Around 7:04, the flickering hole in the background widened, showing even more of the scenery that Brenner was driving past.

Brenner's dangerous driving took place on the same day that Republicans Cindy Abrams and Brian Lampton introduced HB 283 to the Ohio Legislature to ban holding and operating a cell phone or other electronic device while behind the wheel. Language in the bill exempts first responders and infrequent emergency situations and permits speakerphone calls as long as the person is not holding or typing into the phone.

Police could pull a motorist over and issue a citation for operating a device while driving, the bill says. It would be considered a primary offense and a misdemeanor and would come with a fine of up to $150 for the first offense. If it happens a second time within two years, the fine goes up to $250. After three or more offenses within two years, the motorist would pay up to $500 and could have their license suspended.

Since Brenner repeatedly touched, adjusted and watched his camera's screen while driving, he would be in violation of the new law.

That doesn't seem to bother him, though. Soon after the virtual meeting, Brenner told the Columbus Dispatch that he paid attention just fine.

"I wasn't distracted. I was paying attention to the driving and listening to it (the meeting)," Brenner told the Dispatch.

Apparently, this is something Brenner does frequently.

"And I've actually been on other calls, numerous calls, while driving," Brenner said. "Phone calls for the most part but on video calls, I'm not paying attention to the video. To me, it's like a phone call."

It's true — there are options for joining a virtual meeting as a phone call rather than a video call. But on May 2, Brenner 1) played with his phone frequently, 2) stared at the screen, and 3) changed his background to make it look like he was not in a vehicle.

Brenner joined the Ohio Senate in 2018, becoming known for the restrictive "heartbeat bill" that can punish abortion as a felony and, along with his wife Sara, for comparing former Ohio Department of Health director Amy Acton's recommendations to "Hitler's Germany." (Acton is Jewish.)