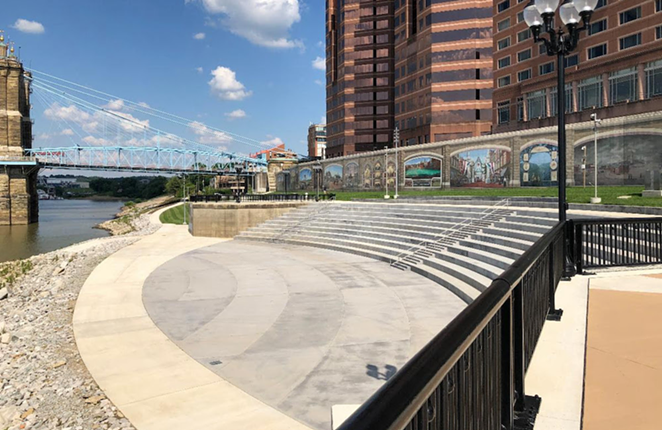 A new public space will soon be officially open along Covington's riverfront.

“Whether you go the river to listen to performers from The Carnegie, to walk your dog, to ride bikes with your kids, or just to sit on the steps to watch the Ohio float by while eating take-out sushi with a date, you’re going to appreciate this new access,” said Covington Neighborhood Services Director/current interim City Manager Ken Smith in a release. “It’s truly a new era for Covington.”

During the grand opening celebration, there will be live music from The UltraSonics and food trucks providing everything from beer and dinner to ice cream.

Prus Construction oversaw the project, which required more than 4,000 cubic yards of concrete.

To complete the build-out of Covington Plaza, a press release says that Prus had to remove an old parking lot from under the Roebling Suspension Bridge and get rid of debris like garbage cans and stanchions left over from the days of the Covington Landing floating restaurant complex (revisit the 1993 Cincinnati-filmed Roller Blading classic Airborne to remember what that looked like).

The plaza — a $6.5 million endeavor that stretches from Greenup Street to Madison Avenue — is part of Phase II of Riverfront Commons.

“Riverfront Commons was a very challenging project but a very rewarding project at the same time,” said Prus Project Manager Jared McFaddin. “Anytime you are working along 1,500 linear feet of the Ohio River shoreline you are in for some ups and downs, literally and figuratively. The river does not always stay within its banks, which creates construction difficulties and sometime a lot of cleanups."

Speaking of "ups and downs," a tumultuous Ohio River is part of the reason for the closure of the aforementioned Covington Landing, which suffered flooding, leaks, debris and a barge wreck which took down — and sunk — the final floating restaurant in 2014.

“It’s difficult to convey the magnitude of what this project represents to Covington,” said the city's Smith in May of Covington Plaza. “For a long time, we were either blocking the river or trying to tame it. Going forward, the City is embracing its riverfront and giving residents more opportunities to access and appreciate its beauty.”

Riverfront Commons is a regional project proposed two decades ago by Southbank Partners in order to link six cities from Fort Thomas to Ludlow with a 11.5-mile hiking and biking path. Covington's completed portion will eventually span 2.7 miles and they are currently getting bids for a section from the Highway Avenue floodgate to Hathaway Court.

Covington Parks & Recreation Manager Ben Oldiges and his staff have already started planning events for the plaza, including music productions I Got Rhythm and George Remus: A New Musical from The Carnegie and a three-day Rockin Taco Festival to be held at the end of June.

“The more and more events we schedule, the more excited people will be that we have this rejuvenated space to work with,” Oldiges said in the release. “And on top of that, outside of Devou Park, it’ll also have the best view of the Cincinnati skyline.”