On This Day in 1989, Nirvana Played a Show to 30 People at Murphy's Pub in Clifton

The Nirvana show, and its pink flyer in particular, have become local legend. (We also found a YouTube video that purports to have audio from the concert.)

By CityBeat Staff and Mike Breen 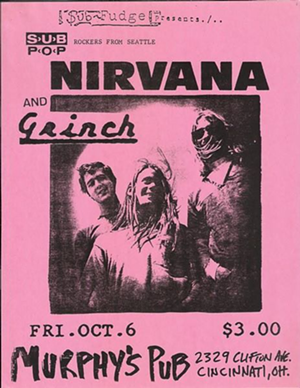 On Oct. 6, 1989, a little band from Aberdeen, Washington came to Cincinnati for a club show at Murphy's Pub in Clifton.

The show, and its pink flyer in particular, have become somewhat of a local legend. In fact, in 2019, Cincinnati print/design house We Have Become Vikings put it on a T-shirt to raise funds for Women Helping Women (and we gave it a Best Of Cincinnati staff pick). Five dollars for each shirt sold was donated to the nonprofit to honor the memory of Kurt Cobain, a feminist ally.

The photocopied flyer itself includes a picture of the band (this was pre-Dave Grohl; Chad Channing was behind the drum kit) and the admission price — a whopping $3.

The show was opened by local band Grinch, led by Bill Alletzhauser, who went on to play with The Ass Ponys and form great local bands like The Hiders and Ruby Vileos.

Cincinnati writer/musician Peter Aaron, who designed the flyer and booked the show, once estimated it drew a crowd of around 30 people.

Read CityBeat's interview with Aaron about his Cincinnati promoter past at citybeat.com.

And watch this YouTube video, which reportedly features audio of Nirvana from the Murphy's show: