This classic August Wilson plays examines racism and music in the 1920s. 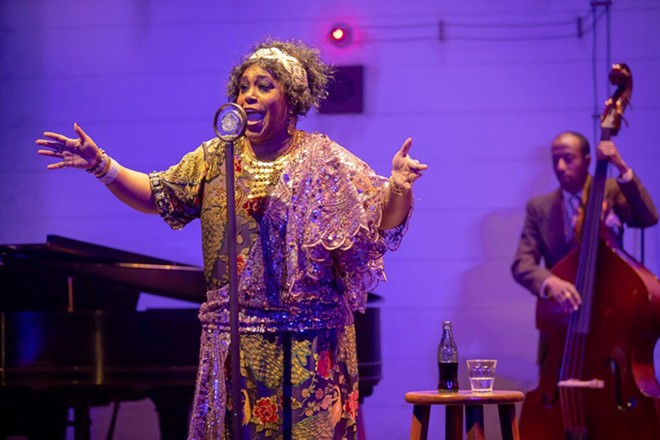 August Wilson’s searing portrayals of the agonies and ecstasies of the lives of Black Americans are widely admired. His “Century Cycle,” chronicling the African American experience across the 10 decades of the 20th century, has firmly placed him in the pantheon of great American playwrights. The first of these works to land on Broadway in 1982, Ma Rainey’s Black Bottom, is a powerful statement about challenges for musicians, a microcosm of the racism experienced by broader populations of color.

Wilson’s show first came to Cincinnati audiences at the Playhouse in the Park in 1988. In 2021, a much-praised Netflix film starred Viola Davis as the legendary Blues singer, Ma Rainey; Chadwick Boseman played the spirited but tragic trumpeter Levee. If you need another dose, find an evening in the next few weeks and attend the show’s incarnation at Cincinnati Shakespeare Company. It compares favorably.

Staged with careful attention to each of Wilson’s artfully drawn characters by director Candice Handy, this production is an excellent example of Cincy Shakes’ growth and strength in producing a broad array of classic works. Many of Handy’s polished cast members are regulars who generally perform at the company’s theater (1195 Elm St., Over-the-Rhine). Augmented by other local professionals and one from Chicago, they constitute a tightly knit ensemble.

The story begins with Cincy Shakes veterans Jim Hopkins as Sturdyvant, a blustering, prejudiced recording studio executive, and Jeremy Dubin as Irvin, Ma Rainey’s beleaguered agent. Preparing for a 1927 recording session for the larger-than-life Blues star, Sturdyvant is ranting about another difficult session with the temperamental performer. (The real Gertrude “Ma” Rainey lived from 1886 to 1939.) Irvin tries unsuccessfully to reassure the fuming executive that everything is under control, although it’s evident that’s not really the case.

Three musicians who back up Ma’s recordings arrive: Slow Drag (Geoffrey Warren Barnes II), the bass player; Cutler (Ken Early), who plays trombone and guitar; and Toledo (a West Texas-based actor who goes by “ranney”), the pianist. Warming up in a dusty downstairs space (the worn studio areas were designed by Tony Hardin), they spar in friendly ways about what’s likely to follow, swapping stories about life as musicians on the road. Young, trumpeter Levee (Crystian Wiltshire) arrives with an explosion of self-important energy: Dressed in flashy black attire with vivid red accents, he shows off a pair of expensive new saddle shoes, black with inlaid red leather. He’s clearly a young man with ambitions beyond playing in a back-up combo for a singer he believes is passé. He intends to use his own jazzy arrangement of Ma Rainey’s signature tune.

Ma Rainey (Torie Wiggins) and her fawning entourage — her nephew, Sylvester (Tyren Duncan), and a groupie, Dussie Mae (Arrianna Chai) — make a chaotic arrival, in the custody of a Chicago police officer who Irvin must pay off to avoid arrest for assault, since Ma has fought her way into a cab that was waiting for another passenger. The stage is set for a titanic battle of wills that digs deeply into issues of aspiration and racism.

Ma wants things her own way, no matter how unreasonable. Levee fully intends to show off his obvious musical talent, despite warnings about Ma’s preferences. He fantasizes about forming his own band. Both Ma and Levee are striving for success in a white man’s world: she by the force of her personality and presence, he by his talent and foolhardy charm. They have moments of success based on brief opportunities, but it's apparent that neither will end particularly well. Ma wryly observes that it’s only her recorded songs that white record producers want, not her whole self: “As soon as they get my voice down on them recording machines,” she tells the musicians, “then it’s just like if I’d be some whore and they roll over and put their pants on.”

That unjust circumstance is much of what drives this cantankerous woman’s performance of the Blues: “You don’t sing to feel better,” she explains. “You sing ’cause that’s a way of understanding life.” It’s a tough perspective that Levee has not learned. He’s all about clowning and hijinks, believing his charm can carry the day — but it doesn’t even make a dent and he’s offered a pittance for the music he’s composed. That lights the fuse of his anger, which fuels the play’s sad denouement.

Wiltshire’s Levee is truly the play’s central character, and this young actor carries the role off with real power. As he spars with his common-sense musical colleagues, his temperature keeps rising until an explosion is inescapable. Wiltshire delivers a multifaceted performance as he reveals several difficult stories from Levee’s past in searing monologues, trademarked pieces in Wilson’s plays. He becomes the victim of his own pride and desire in a world that simply isn’t ready or willing to open the door to his talent.

Wiggins is eminently convincing as the larger-than-life, full-of-herself, indignant Ma Rainey. Dressed in a glittering, fringe-festooned dress and matching hairband (costumes are by Daryl Harris), she sucks up most of the oxygen onstage during her scenes, radiating fierce emotions, deeper pain, and occasional moments of tenderness, such as coaching her stuttering nephew struggling to introduce one of her songs.

Barnes’s pragmatic Slow Drag, Early’s stoic Cutler, and “ranney”’s opinionated Toledo (the only musician who can read, he’s often studying a newspaper) converse and josh with one another. Their interactions reveal a broad range of character, each a vividly realized man in his own right. Together they comprise a believable trio of well-defined, opinionated musicians. Their playing, mimed to a recorded score overseen by music director Yemi Oyediran, is seamlessly convincing

It’s a genuine pleasure to see acting on this level with a powerful script. This production of Ma Rainey’s Black Bottom gives solid evidence to August Wilson’s much deserved reputation.

*A previous version of this story incorrectly stated "ranney" was from Chicago.
© 2022 Cincinnati CityBeat