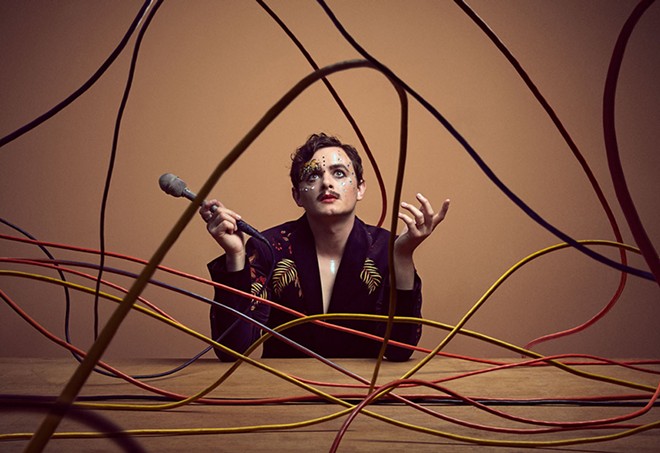 There was only one good result from the breakup of Cincinnati Indie Rock band the Pomegranates, and that was the prodigious output from its individual members in their post-band guises.

Multi-instrumentalist Joey Cook has been one of the most visibly active among the ex-Pomegranates, working initially under his own name, then adopting the nom-du-rock Joesph and now, in deference to the hundred or so artists who identify as Joseph, the hybridized Joey Joesph.

Beginning with the three-song EP Return to Pavilion of Dreams in 2014 and the ethereal-yet-grounded full-length faith primer There Comes the Lord  two years later, Cook has remained single-mindedly busy in the intervening years, releasing a steady stream of singles, EPs and albums while maintaining an active live profile around the city.

Less than a year later, Cook has returned with yet another concept. This time he envisions a future where cults have overtaken the cultural and spiritual landscape and the world's coming generation has formed a host of Punk bands to voice their resultant displeasure and rage at their reprogrammed and damaged adult counterparts. One such band of malcontents is Cook's fictional band Joey Joesph and the Bongo 3, and their danceably anthemic New Wave/Punk screed is titled after the youth movement's rallying cry/safe phrase, “Do you bongo?”

Setting aside the concept, Do You Bongo? stands as one of Cook's most bracing Rock records to date. There are dance grooves reminiscent of Nite Vibes, but the Synth Pop elements are more suggestive of Xanadu-era Jeff Lynne and early Devo, as well as lesser known late-'70s/early '80s figures like Elton Motello and a less industrial Clock DVA.

“Bellzebub,” the album's opening track, is bristly Power Pop that calls to mind the Cars while the subsequent “Little Brother” works the intersection of Elvis Costello's angry-young-man-with-a-Farfisa ethic and the Undertones' gleeful Pop/Punk chaos.

There are three songs that serve as themes of a sort for the trio that backs Joey Joesph — “Kimi Cigarette” is burbling Synth Pop, a cross between early Human League and Harry Nilsson; “Lizzy Says” bounces along with Game Theory sincerity and smirk; and “Dottie's Motorbike” lurches along like Devo on a vodka drunk after listening to Todd Rundgren's A Wizard, A True Star.

Do You Bongo? closes with “Bongo 3,” the story of how the band assembled in the first place. It is Cook's three-minute paean to Ziggy Stardust, using it to lower the curtain rather than raise it.

Now that you're lathered up enough to want to get your very own copy of Do You Bongo?, here's the caveat. The album is not yet out; it's official release date is mid-August, and Cook recently activated a Kickstarter campaign to obtain funding for a blue vinyl version of the album.

As with most crowdfunding, there are plenty of possible rewards for backers at various levels, including the digital release, a physical copy of the vinyl pressing, an exclusive digital EP, a T-shirt, a poster, an original drawing by Cook and a very limited edition test pressing of the album. Details about backing amounts and the rewards associated with each level can be found at kickstarter.com.

And remember, if anyone asks, “Do you bongo?" the definitive answer is “You bet your ass I do.”