This weekend promises the return of Art After Dark, HorrorHound and a bunch of giant, animatronic dinosaurs.

Photo: Provided by the Cincinnati Art Museum
Art After Dark

Art After Dark
Take in a night at the museum with the return of the Cincinnati Art Museum’s Art After Dark cocktail party series. This Friday celebrates the opening of exhibition Black & Brown Faces: Paying Homage To. As the museum’s website explains, “Building on the impact of 2020’s inaugural Black & Brown Faces exhibition, this presentation expands the representation of Midwestern artists of color to 15. Each brings their own interpretation of portraiture paying homage to 15 living honorees of color who are working to make our city a more equitable and just community.” This special event also includes free admission to exhibits David Driskell: Icons of Nature and History along with Working Together: The Photographers of the Kamoinge Workshop. There will be booze and food available for purchase, plus music courtesy of DJ Arie. 5-9 p.m. March 25. Free admission. Cincinnati Art Museum, 953 Eden Park Drive, Mount Adams, cincinnatiartmuseum.org.

HorrorHound Weekend
Do you like scary movies? Monsters? What about masked, knife-wielding psychopaths? If the thought of meeting the people that bring such horrors to the big screen fills you with delight, HorrorHound Weekend is your chance to get a few autographs and take selfies with the best living talent in horror cinema. This year’s celebrity guest list is especially thrilling if you’re a fan of Scream, as Neve Campbell, Matthew Lillard, Jamie Kennedy and Skeet Ulrich are slated to be in attendance, along with Tom Savini, the special effects maestro responsible for Dawn of the Dead, Friday the 13th and Creepshow, to scratch the surface of his career. There’s a lot of cool folks to meet, so check the HorrorHound website for the full guest list and meet-and-greet/autograph package pricing. 5-10 p.m. March 25; 11 a.m.-7 p.m. March 26; 11 a.m.-5 p.m. March 27. $35 single-day tickets Friday; $35 single-day tickets Saturday; VIP, Saturday and weekend passes sold-out. Sharonville Convention Center, 11355 Chester Road, Sharonville, horrorhound.com.

Jurassic Quest
Look, growing old is tough, but at least we’re not extinct yet. Go to Jurassic Quest and rub that in the faces of the gigantic animatronic dinosaurs who are going to transform the Duke Energy Convention Center into the lost world this weekend. This traveling dino show boasts a 50-foot-long megalodon, 60-foot spinosaurus, 80 foot-long apatosaurus and a life-size T-Rex that looks convincing enough to thrill the horns right off a triceratops. There are rides and fun activities for all ages and the event was designed with strollers in mind, so bring all the kiddos — and don’t forget to wear socks if you want to ride the inflatables (also, velociraptors like to eat bare toes). This is a self-guided tour with timed entry to avoid large crowds, so register online before tickets go extinct. 1-8 p.m. March 25; 9 a.m.-8 p.m. March 26; 9 a.m.-6 p.m. March 27. $22 adults; $19 seniors; $22 kids; $36 kids unlimited rides. Duke Energy Convention Center, 525 Elm St., Downtown, duke-energycenter.com.

#ShakespearesShitstorm Screening at Humble Monk Brewing
Get your barf bag ready, Troma Entertainment is coming to town for a screening of #ShakespearesShitstorm at Humble Monk Brewing. #ShakespearesShitstorm, a reimagining of The Tempest, features a slew of evil pharmaceutical executives aboard a luxury cruise ship to North Korea. They ruined Prospero’s life and so he “uses his science, magic, and a load of whale laxative to create the titular Shitstorm, wrecking the cruise ship and causing its execs to wash up on the shores of Tromaville,” per the film description. “Prospero’s planned a brutal revenge — with all the sex, mutations, musical numbers, and violence that Shakespeare always wanted but never had!” The film is not recommended for young or queasy audiences. If you’ve ever seen a Troma film, you know exactly why. The #ShakespearesShitstorm screening includes a meet-and-greet with Troma’s founder Lloyd Kaufman and The Toxic Avenger. 8-11 p.m. March 25. $20. Humble Monk Brewing, 1641 Blue Rock St., Northside, eventbrite.com.

Eighth Blackbird with the Cincinnati Symphony Orchestra
The Grammy Award-winning ensemble Eighth Blackbird joins the CSO for an evening of music. The program includes Hector Berlioz’s “Symphonie fantastique,” Wynton Marsalis’ “Herald, Holler and Hallelujah!” and the premiere of “Nine Mothers” from Kinds of Kings. In addition to the show at Music Hall, Saturday’s concert will be livestreamed on the CSO’s website, YouTube and Facebook page. 7:30 p.m. March 25 and 26; 2 p.m. March 27. $14-$115. Music Hall, 1241 Elm St., Over-the-Rhine, cincinnatisymphony.org. 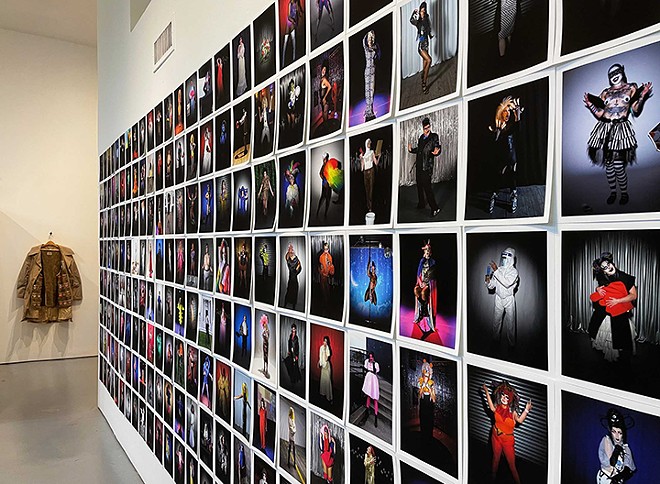 Photo: provided by Rachel Rampleman
Life Is Drag at Wave Pool features both video portraits and images of video stills.

Life Is Drag at Wave Pool
Life Is Drag is an ongoing project that captures the exuberant and unignorable personalities of alt-drag performers challenging gender norms with expressive, individual acts. From artist Rachel Rampleman, this Wave Pool exhibit features monitors screening video portraits of performers as well as a wall of more than 200 video stills. Rampleman describes alt-drag as “spooky/goth drag, monster-y presenting drag and usually still drag queens. If traditional drag equals RuPaul’s Drag Race, alt-drag equals Boulet Brothers Dragula.” The art includes the entire spectrum of genders, regardless of how the performer identifies, and the fluidity of gender and radical self expression are the focal points. Read an interview with Rampleman at citybeat.com. Gallery hours noon-5 p.m. Wednesday-Saturday. Life Is Drag is on view through April 30. Wave Pool, 2940 Colerain Ave., Camp Washington, wavepoolgallery.org.

Death Game and Knock Knock at Esquire Theatre
Esquire Theatre is screening a double feature of 1977’s Death Game and Knock Knock, director Eli Roth’s 2015 remake of the film starring Keanu Reeves. Death Game is about George, a husband at home alone while his wife is out of town on a family emergency. It’s George’s birthday and he’s enjoying a quiet evening by the fire while a storm rages outside. He receives some unexpected guests, two soaking wet and shivering young women, Jackson and Donna. The women say they are lost and need to use George’s phone to call friends to pick them up, but one thing leads to another and they all wind up in the tub together. George wakes up the next morning to Donna and Jackson playing house, making breakfast and acting as if last night wasn’t just a simple threesome fling, but the start of something long-term — a cheater’s nightmare. The movie escalates into terror as George comes to fully appreciate who he’s invited into his home — and his bed. The version starring Keanu Reeves features Lorenza Izzo and Ana de Armas. Director Roth shot an intro to the double feature that will play before the films. 7 p.m. March 26. $12 (includes free pizza). Esquire Theatre, 320 Ludlow Ave., Clifton, esquiretheatre.com. 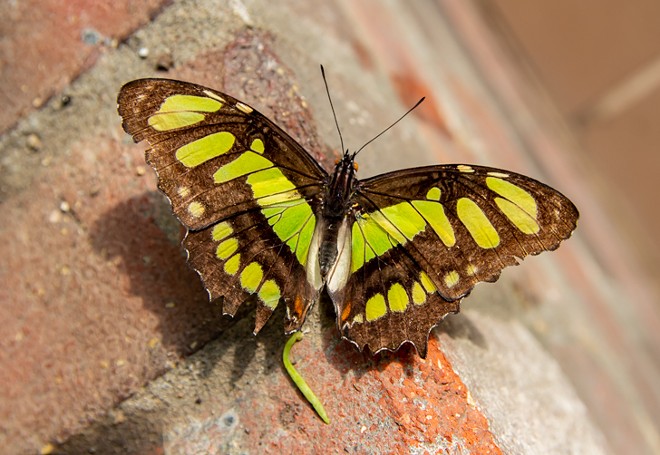 Butterflies of the Nile at Krohn Conservatory
The beauty and mystery of Ancient Egypt is descending on Cincinnati's Krohn Conservatory — or at least its butterflies are. Krohn has announced the theme for its super-popular annual butterfly show: Butterflies of the Nile. A description provided by Cincinnati Parks (which oversees Krohn) says the floral exhibit will be "specifically designed to show just how lush and inviting the gardens of ancient Egypt could be." Design elements have been lifted from the art found in Egyptian tombs and temples and call to mind imagery like "orchards, palms and fish ponds with lotus plants." This show requires a timed ticket; only 100 spots are available for each one-hour interval. Through June 19. $10 adults; $7 children; free for ages 4 and under. 1501 Eden Park Drive, Eden Park, krohn.ticketspice.com.

Steel Magnolias at Playhouse in the Park
This classic Southern tale of friendship, strength and loss is onstage at the Playhouse in the Park. As described by the theater, “A tight-knit group of Louisiana women gather regularly to bond, dish and offer advice on everything from motherhood and marriage to tragedy and loss.” Favorite characters from the 1989 film (based on a 1987 play) include Truvy, the salon owner; her timid assistant, Annelle; the grumpy Ouiser; and Shelby, who is a new mom struggling with complications from type 1 diabetes. Through April 17. Tickets start at $35. Playhouse in the Park, 962 Mt. Adams Circle, Mount Adams, cincyplay.com.