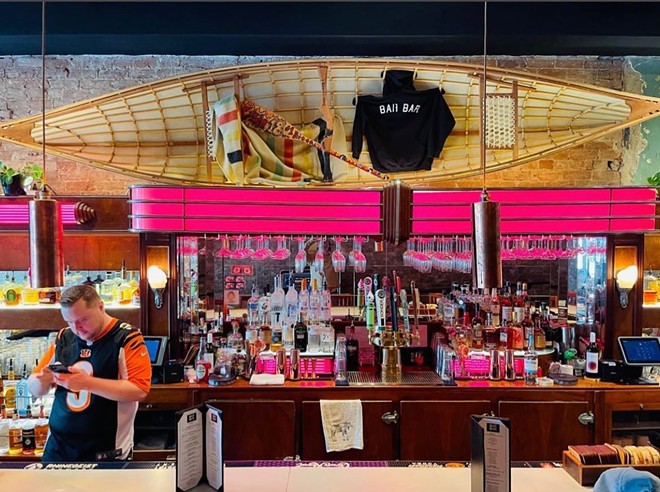 Cincinnati’s Over-the-Rhine neighborhood offers a seemingly endless assortment of entertainment options. Findlay Market defines the northernmost corner, with veins of one-way streets and historic buildings embellished by colorful murals pulsing outward from the market. Every night, Cincinnatians and outsiders alike descend upon the Over-the-Rhine neighborhood to indulge in dinner and drinks from area restaurants and bars.

But from Findlay Market toward Liberty Street, local developers Chris Reckman and Casey Coston of Urban Expansion see a lack of nightlife options. More specifically, the stretch was in need of a no-frills establishment to enjoy a few adult beverages after a long day.

“In that area, there are some bars,” says Coston, vice president of Urban Expansion. “La Ofrenda, the tequila bar, or Cosmic Gorilla, the comic book bar. But there really isn’t a bar bar, you know?”

Coston and Reckman are betting that repetition of the word “bar” will speak for itself.

Coston and his partners opened Bar Bar OTR at 1709 Race St. in December with plans to be extremely normal. Even if the name is a little too on the nose for some, it’s catchy enough to attract wonder. A standard place that exists between blah and boisterous, the bar exists as a go-to respite that has no agenda other than to be there for thirsty patrons or neighbors.

“It’s just a bar bar. The non-theme is that sometimes you just want a bar, not a carnival ride or the Taj Mahal or the Hanging Gardens of Babylon or whatever. So we sort of focused on a comfy vibe, no pretensions,” Coston tells CityBeat. “It’s a dive bar, but dive bar doesn’t mean it has to be a dump. It can be a nice dive bar.”

Even the shabbiest dive bar with the stickiest floor and the most unbothered bartender will gain a little extra attention in OTR compared to what it might in other neighborhoods. With that in mind, patrons should expect upscale comfort, like the approachability of Milton’s Prospect Hill Tavern meets Longfellow’s trendy-but-cool and simple essence.

Urban Expansion — an OTR real estate and development company that also owns and operates Queen City Radio — acquired Bar Bar’s Race Street property in late 2019. Reckman, the owner of Urban Expansion, and Coston shared the vision for Bar Bar and during a year’s worth of pandemic setbacks oversaw the construction and renovations.

Creating Bar Bar was quite a different task than they were used to, as the business’s entire footprint probably could fit within Queen City Radio’s bar area alone. Other than sharing owners, the two bars don’t have much else in common — except for one very large decor item, that is.

A moose head wall mount oversees the shotgun-style Bar Bar. The stoic, scarf-wearing mascot’s backside originally was supposed to hang on the other side of the wall, where a short hallway leads to restrooms, but the butt was too big for Bar Bar’s humble square footage.

Instead, Bar Bar’s moose rear found a permanent seat at Queen City Radio, a large indoor/outdoor spot at the border of OTR and the West End that’s an unofficial rally site for FC Cincinnati fans.

Bar Bar has room for about 14 bar stools, a few tables and a modest patio area that Coston says soon will transform into a streatery. A fresh coat of black paint atop the brick facade is complemented by sleek white trim. Two large front windows allow the ambiance to stretch outside, hopefully gaining the attention of passersby, which is pretty much the whole point of the location, Coston says.

“I don’t think there’s any bar like it in the neighborhood. There are breweries, there are restaurants, but there’s no place to hang or meet people for happy hour and that’s what I think we are trying to fill there,” Coston says. “And also to help the connection between Findlay Market and the south of Liberty, which sort of are thriving, but then it peters out once you head north.”

As Findlay Market’s neighbor, Coston is looking forward to warmer weather, when the seasonal revival of the area promises more foot traffic.

Above Bar Bar, Urban Expansion houses two residential sites, one with a full-time resident and the other an Airbnb unit. Below the apartments, Bar Bar energizes the space while yielding a cool intimacy. Coston says they kept the decor to a minimum, allowing the Art Deco-style bar and Wurlitzer Americana Jukebox, both of which provide a permeating pink glow, to be icons of the atmosphere.

Coston hand-picked every 45-inch vinyl record in the jukebox, selecting tunes from the ’70s and ’80s, which, when added to the bar’s ambiance, somehow cultivates a timeless feel. The jukebox is free to play, and the collection is changed out regularly.

“I think that it’s gone really well so far, recognizing that it’s been January, February, March basically that we’ve been open,” Coston says. “It’s given us a chance to get our legs under us and develop our system and work out the kinks. We’ve been really happy with it so far. It’s an intimate hang and a good vibe.”

Coston says a plan for an official grand opening is in the works, and patrons can look forward to the event sometime in April after events surrounding the Cincinnati Reds’ Opening Day celebrations occur.