The singer will be performing at the Cincinnati venue on April 22. 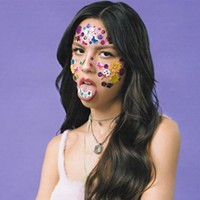 Fresh off Olivia Rodrigo's dazzling appearance at the 64th-annual Grammy Awards, where she snagged three Grammys, the singer is set to perform a sold-out show at the Andrew J Brady Music Center on April 22.

It’s been a crazy year for Olivia Rodrigo, the Disney actress-turned-musical-powerhouse. The 19-year-old singer/songwriter’s debut album, Sour, which dropped last May, catapulted her into the spotlight alongside such bigwigs as Adele, Taylor Swift and Billie Eilish in exposure (it was No. 2 on Billboard’s “total equivalent album units” list in 2021), critical adoration (the album finished No. 2 on the Uproxx critics’ poll) and cultural cachet (she wowed everyone from pre-teens to Robert Christgau, the 79-year-old “Dean” of music criticism).

Rodrigo’s first tour, which kicked off in March, sold out within minutes of going on sale.

“A really beautiful thing about songwriting is watching songs that are so personal to you go out into the world and kind of take on another life,” Rodrigo said in a recent interview with Billboard. “So, performing the songs now is even more special than it was when I was writing them in my bedroom, because they now have so many other people’s stories intertwined within them, too. I’m really excited to experience that firsthand on tour.”

The bedroom thing can be a cliché, but it seems legit in Rodrigo’s case — Sour mines the songwriter’s admittedly short romantic history with uncommon insight and emotional resonance. It’s a concise, exquisitely crafted break-up record marked by experiences at once personal and universal. Or, as Christgau wrote, “Again and again dainty melodies meet big drums and are only stronger for it as every simple word comes clear. She doesn’t drink yet but knows how he like his coffee and let’s bet her own; she says ‘fuck’ and ‘bullshit,’ the latter to modify ‘eternal love.’ ”

And, of course, everyone is now asking how she can possibly follow up such an explosive opening salvo.

“It’s definitely a different experience writing a second album after having a debut that was so well received,” she told Billboard. “I still write so much of my music in my bedroom, though, and I don’t think that experience will ever change. Writing songs will hopefully always be an outlet for me to process my feelings before anything else.”

Doors open at 6:30 p.m. Tickets are sold out as of press time. More info: bradymusiccenter.com.