Experts: Nan Whaley Might Actually Have a Shot Against Gov. Mike DeWine in November

“Without a doubt [DeWine's] vulnerable. And that vulnerability comes from a lack of enthusiasm among the Republican base.” 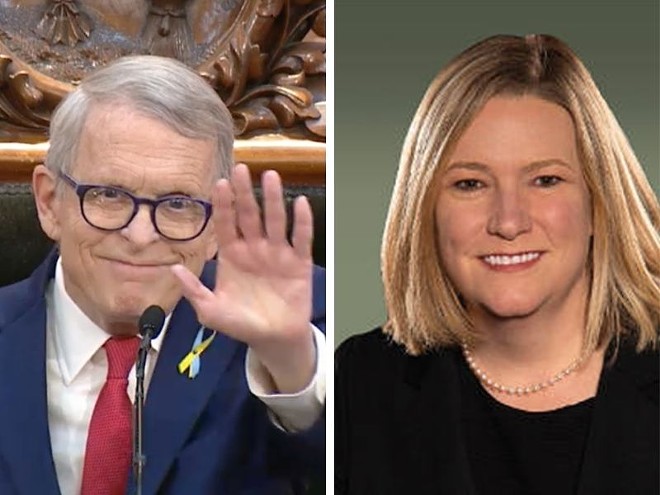 Anybody who’s been around Ohio politics for a minute knows this: It’s not the best use of your money to bet it against Mike DeWine.

In addition to all of that, over the decades DeWine has been in politics, Ohio has trended toward his Republican Party. And this year, inflation, a possible recession and midterm political trends would all seem to help his chances in the general election.

Oh, and he just helped land a $20 billion investment by chip-maker Intel in Central Ohio.

But as they read the tea leaves from Tuesday’s primary, two Ohio political scientists on May 4 said that Nan Whaley, the Democratic nominee, might actually have a chance against DeWine come November.

“It’s going to be a tall task,” said David B. Cohen, a political scientist at the University of Akron’s Ray C. Bliss Institute of Applied Politics. But of DeWine, he added, “Without a doubt he’s vulnerable. And that vulnerability comes from a lack of enthusiasm among the Republican base.”

According to the unofficial results, DeWine took just 48% of the vote in the four-way Republican Primary. It’s unusual for a gubernatorial incumbent to draw a serious primary challenge — much less take less than half the vote.

But anger over lockdowns and mask requirements DeWine implemented early in the coronavirus pandemic left scars among the Republican base, said Paul Beck, an Ohio State political science professor emeritus. Although DeWine is the leader of the party, the Republican-controlled legislature humiliated him by passing a bill that limited such health orders and then overrode his veto of it.

“There’s a lot of dissatisfaction with him on the Republican side,” Beck said. “You can see it in the legislature and the Republican majority’s rebuke of DeWine.”

Add to that the fact that former President Donald Trump publicly undermined DeWine after the governor recognized the objective reality of Trump’s loss to Democrat Joe Biden in November 2020.

“Who will be running for Governor of the Great State of Ohio?” Trump tweeted while he was still allowed on the platform. “Will be hotly contested!”

The lack of Trump’s full-throated support can be seen in the primary results, Cohen said.

While DeWine got 48%, former Congressman Jim Renacci got 28% and farmer and political newcomer Joe Blystone got 22%.

Renacci, a wealthy former businessman, has assiduously courted Trump since 2018, when he dropped out of the Ohio governor’s race and instead ran for U.S. Senate against incumbent Sherrod Brown, a Democratic incumbent to whom he lost by 6.8 percentage points.

“Trump, for whatever reason, decided not to endorse (Renacci),” Cohen said. “I don’t think he and his team thought (Renacci) could win.”

Unlike DeWine and Renacci, Blystone spent a relative pittance on the campaign. Yet he unofficially received 233,000 votes.

In other words, others split the hardcore Trump vote, which DeWine didn’t have.

“DeWine might have looked like he won a huge victory, but the fact is that if you add up the MAGA vote in the primary yesterday (May 3), DeWine loses,” Clohen said.

Beck, of Ohio State, said that despite Whaley’s entreaties that they consider her, Blystone and Renacci voters are unlikely to do so. But some of them might stay home, he said.

“I was talking to someone earlier today who said that where he lives — small-town, rural Ohio — there’s a lot of real anger against DeWine; so much so that they might not even vote for him in the general.”

During her acceptance speech onMay 3, Whaley made it clear that she plans to spend the coming months going after DeWine over corruption scandals that have happened on his watch.

They include the Electronic Classroom of Tomorrow, an online charter school founded by a big GOP campaign donor who made himself rich, but did next to nothing to ensure kids were getting the education that taxpayers were financing. They also include a $61 million bribery scandal that resulted in a billion-dollar utility bailout in which DeWine appointees have been implicated.

Cohen called it “political malpractice” by Democrats not to make a bigger deal in the 2018 and 2020 election cycles of scandals implicating Republicans. He added that they should spend money educating the public about them now.

Beck said that Whaley should tie them to long Republican rule in Ohio.

“She’s going to make the case that they have been in power too long, that that corruption clearly is there in the legislature and you’ve got former legislators under indictment and there are going to be trials,” he said. “She’s also going to argue that DeWine has been in the mix with that.”

Indeed, on May 3, Whaley noted that DeWine’s first year in office was the year she was born and bluntly called him “corrupt.” She also referred to increased electric bills as a result of the utility scandal a “corruption tax.”

Beck and Cohen said that getting such messages across could attract independent voters and keep some Republicans home.

And then there’s Monday’s news that the U.S. Supreme Court is poised to strike down Roe v Wade, clearing the way for laws that could severely restrict abortion in Ohio or even criminalize it in almost all circumstances.

“It’s going to be a real problem for Republicans,” Beck said.

Midterm elections are usually lackluster for the party that has a president in power. But the Roe news is likely to juice turnout especially among women and the young — constituencies that favor Democrats.

In addition, it could put DeWine, a staunch abortion foe, in a bind.

“I fully expect the legislature to move forward with a bill that’s more extreme than in a lot of other states,” Beck said.

Which would leave DeWine with the choice of signing it and risk alienating a big slice of Republicans and independents who support him. Or DeWine could veto it.

“If he doesn’t sign the bill, he’s going to lose the support of the right, pro-life vote,” Cohen said. “This abortion case is a gift to the Democrats in 2022. This is the spark that will get women to go to the polls and energize young voters — voters who were disillusioned with Biden’s first couple of years.”

The Republican Ohio General Assembly supermajority may also wait until after the election, for lame-duck session in December, to pass more abortion restrictions for DeWine’s consideration.

DeWine Wins Primary Again, Will Face Nan Whaley in Ohio's Race for Governor This November: The incumbent governor and the former Dayton mayor will duke it out later this year.