The play is inspired in part by the 2004 film Mean Girls. 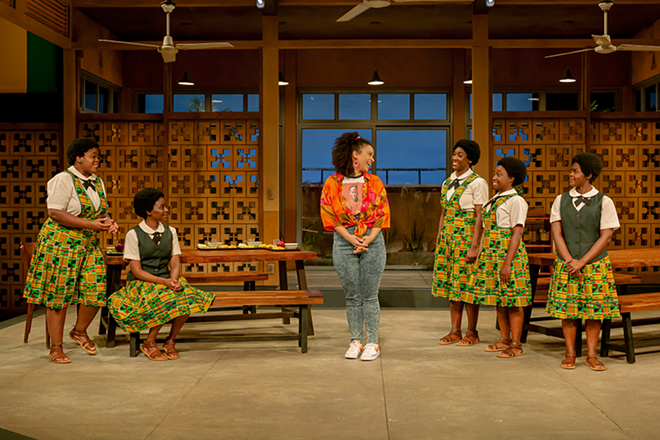 The chatter of high school girls about make-up, pop music, clothes and more is how Jocelyn Bioh’s School Girls; Or, The African Mean Girls Play begins. But these are not giddy American teens: They’re adolescents enrolled at a boarding school in mountainous central Ghana in 1986.

The characters cross the spectrum: Mercy (Kayla Forde) and Gifty (Jasmine Cheri Rush) are a tag-team who often amusingly speak and move in unison to demonstrate their enthusiasm, especially for American pop star Bobby Brown. Ama (Matenin Sangare) is softer spoken and clearly an intellectual. And sweet Nana (Starnubia) lacks self-confidence because she is overweight.

Finally there’s the mean bully, arrogant Paulina Sarpong (Markia Nicole Smith), who is talented and knows it. She is not only confident that she can come out on top in an audition for the Miss Ghana Pageant, but she also bullies the other girls, especially Nana, who probably doesn’t have a chance.

But it’s evident that Paulina is covering up some of her own insecurity. She naively misunderstands aspects of American culture that she speaks so confidently about, planning to wear a gown by Calvin “Klean” and admiring White Castle (“a castle with food”).

They are overseen by Headmistress Francis (veteran Cincinnati professional Burgess Byrd), who was once a student at Aburi Girls Secondary School and is stern but has a playful side. Eloise Amponsah (Patrice Bell), an uber-sophisticated alumna of Aburi and a 1966 Miss Ghana winner (as she frequently reminds everyone within earshot), has become a recruiter for the Miss Ghana contest. She ambitiously seeks a candidate to win the title of Miss Global Universe, a worldwide honor, in large part to expand her own fame.

Paulina’s dominant role is challenged when Ericka Boafo (Kaitlyn Boyer) arrives. She’s from America (in fact, from Ohio) and is considerably more well-versed in pop culture and style than the Ghanian girls. It’s clear that she and Paulina are on a collision course.

School Girls’ subtitle — or, the African Mean Girls Play — makes clear that its inspiration was Tina Fey’s 2004 movie as well as the 2018 Broadway musical based on it. But Bioh’s play, which includes lots of humor and teen angst, takes it to another level, rooted in colorism and prejudice based on skin color. For example, Paulina is dark-skinned while Ericka is light-skinned and, with her American sophistication, Ericka is quickly deemed by status-seeking Eloise to have the best chance in the international contest because of her “more universal and commercial look.” It becomes clear that Eloise was a bully during her time at the school and continues to run roughshod over others to get her own way. 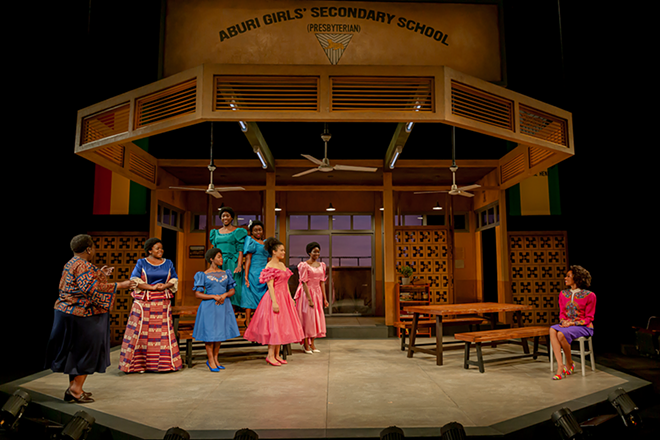 Following a horrendous choral rendition of Whitney Houston’s “Greatest Love of All,” the conflict between the girls erupts and the play takes a sharp turn into an exploration of racism in a setting distinctly different from the United States. We learn more about the prior lives of Paulina and Ericka; their stories are more complex than simple teens seeking status, with backgrounds they both are eager to escape. Bioh’s play ends ambiguously, with the girls wondering whether it was worth the conflict.

The playwright is the daughter of parents who emigrated from Ghana in 1968. She experienced racial typecasting as a theater student at Ohio State, and her plays have explored these issues. Director Candis C. Jones has dug into what she calls in a Cincinnati Playhouse newsletter “the major social-psychological principles of discrimination, conformity and prejudice” which affect all of these characters’ behaviors. In the newsletter, she adds, “We rarely see how having lighter skin can be a marker of privilege and a standard of beauty. The unspoken privilege can cause harm in Black female friendships and diminish self-worth.”

Bioh’s play does not resolve the issue, but it certainly brings it forward in a way that’s deceptively simple and cunningly inviting, couched in humor and teen banter. There are a lot of laughs in the show’s first hour, but its final 20 minutes push home a more profound message about the corrosive impact of prejudice and discrimination. The story ends with the girls watching the televised and perhaps-inevitable outcome of the Miss Global Universe pageant. We are right there with their disappointment for how things turn out.

It's a show worth seeing for the insights it provides — whether you’re a schoolgirl, a mean girl or just your average theatergoer.

School Girls; Or, The African Mean Girls Play, presented by the Cincinnati Playhouse in the Park (962 Mt. Adams Circle, Mt. Adams), continues through May 22. Tickets start at $35. Info: cincyplay.com.