A decade into his entertainment career, Alex Newell is bringing his “boogie shoes” to the Cincinnati Pride Festival on June 25. 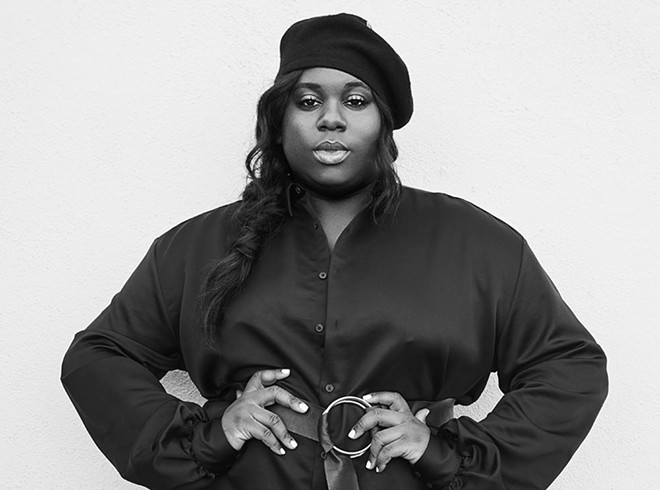 Ten years ago, Alex Newell (he/she/they) attended Pride in San Diego. It was his first Pride event, and he was there to perform. The star, known then for his role as Unique Adams on Glee, took to the stage in bold red leggings and chunky studded heels. In one YouTube upload from that day, Newell grooves across the stage singing KC and the Sunshine Band’s “Boogie Shoes,” hitting all the high notes with natural ease. The audience claps and sings along. It’s all joy and energy.

Newell tells CityBeat that this San Diego Pride premiere was a “full whirlwind.”

Those who are attending the Pride Festival in Cincinnati this year will be blessed by another of Newell’s performances. The gender-fluid singer and actor is headlining the event, alongside Shea Diamond, Jordy and Daya.

Newell’s professional career launched in 2011 when he – like 34,000 other contestants – submitted an audition tape to The Glee Project, a reality show that served as an extended audition for Glee. He was the runner-up, initially earning two episodes in Glee as Unique Adams, a transgender student who feels most confident when presenting female. In his first episode during the third season, Newell performs as Unique and slays in a rendition of the aforementioned “Boogie Shoes.”

Unique was one of the first transgender characters on a prime time show, bold and unafraid to express her true self. Through his portrayal of the character, Newell — who shares these traits with Unique — became an inspiration to young LGBTQ+ folx as well as parents of queer youth. The character quickly became an audience favorite, and Newell regularly returned for Glee’s remaining seasons.

Since Newell’s Pride premiere 10 years ago, he has made appearances at Pride celebrations across the country. Each June keeps him busy, “doing Prides and panels and seeing my chosen family,” he tells CityBeat.

Chosen families are a central part of the LGBTQ+ community. Many queer folx find support, companionship and community through chosen relationships, in lieu of or in addition to a supportive biological family.

For Newell, a chosen family is a unit he enjoys alongside a biological mother who has supported him since the start. In his 2020 single “Mama Told Me,” Newell celebrates the presence of his mother and all maternal figures in the LGBTQ+ community. In an interview with Paper magazine that year, Newell says, “I know that I have one of the strongest mothers, who raised me since I was six, and all by herself.”

With his mother by his side, Newell says came out as a gay man with confidence and pride, even in the religious context of his upbringing. The conflict between personal religion and a queer identity can be challenging to navigate, but for Newell, it was about loving himself and creating his own unique relationship to religion.

“Your faith is something personal for you, and no one can take that away from  you!” Newell says. “You have to be steadfast in that!”

When Glee ended in 2014, Newell turned his attention to his musical career, collaborating with artists such as Blonde and The Knocks and creating discotheque-worthy songs like “All Cried Out,” and “Collect My Love.” In 2016, he released his debut EP, Power.

That same year, he contributed backing vocals for the song “Hands,” a tribute to the 2016 Pulse nightclub shooting in Orlando, with all song proceeds going to victims or their families. In addition to Newell, the song featured stars like Britney Spears, Kacey Musgraves, Gwen Stefani and Jennifer Lopez.

Newell also has found success on Broadway. He made his debut in 2017 with the role of Asaka in Once on This Island. When you’re performing live on Broadway, Newell explains, you’re pacing yourself for eight shows a week. But when you’re headlining an event or putting on a one-off concert, it can be more of a sprint.

It seems as though Newell has been expertly balancing between pacing himself and going all out since he was just a kid. He started singing at age two and was a television star before he graduated high school. He recently wrapped on his role on Zoey's Extraordinary Playlist, in which he played a genderfluid DJ named Mo over two seasons and a film. Newell’s latest single “Attitude” was released in January and is another karaoke-worthy pop hit.

So how does this humble diva keep up with all his projects while avoiding burnout?

“You have to be disciplined while still having fun with it!” Newell says. “It’s all fun at the end of the day.” Pride Is Protest: The Growth Of LGBTQ+ Pride Celebrations Around Kentucky: The proliferation of Pride festivals in the state has moved the needle on acceptance and rights in a part of the country that has remained stubbornly conservative on LGBTQ issues.