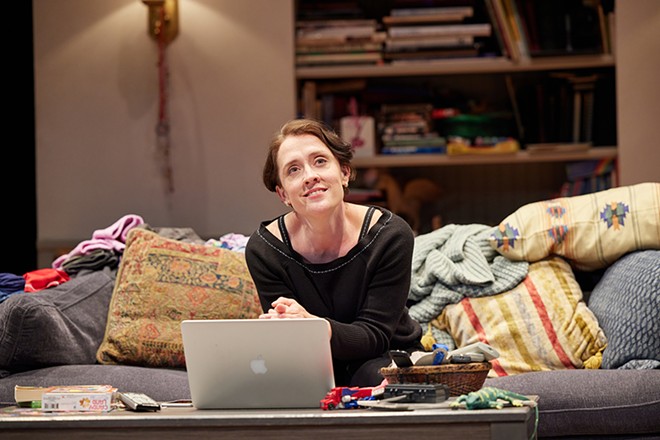 Struggling writer Cheryl Strayed took a flyer in 2010 when she was invited to take over an unpaid online advice column, “Dear Sugar,” on the literary website, The Rumpus. For two years she had offered heartfelt advice that involved sharing some of her own stories as she responded to letters from people who were troubled, lovelorn, shattered, and inquisitive. Their letters and her responses, often candid but always caring, were brought together in a book, Tiny Beautiful Things. Actor and playwright Nia Vardalos (best known for My Big Fat Greek Wedding translated Strayed’s material into the play of the same name that’s concluding the 2021-2022 season at Ensemble Theatre Cincinnati.

Cincinnati Shakespeare Company’s 18-year veteran Kelly Mengelkoch embodies “Sugar,” the nom de plume Strayed had adopted. After some brief false starts, she finds a way to answer the often painful questions from a trio of letter writers. Rather than simply telling them how to handle the situations and circumstances that prompted them to write to a stranger, she humanizes her answers with stories from her own life.

But before she dives into her thoughtful responses to “Confused,” “Stuck,” “Crushed” and other correspondents played by Michael G. Bath, Kearston Hawkins-Johnson and Taha Mandviwala, Mengelkoch’s Sugar listens intently and compassionately. Her openly expressive face lays the foundation as she excavates Sugar’s past experiences that connect meaningfully with the situations she’s asked to address.

The letter writers in Tiny Beautiful Things assume multiple identities, sometimes voices from opposite genders or ages not those of the actors, sometimes in almost choral fashion. More than once, Hawkins-Johnson becomes the persona or presence of Sugar’s mother, who died at 45, as Sugar recalls her own grief at a death. Mandviwala is especially affecting as an 11-year-old boy in one of Sugar’s recollections who briefly steals an item from her and then confesses to his reasons for doing so. These interactions add depth to the storytelling without being overly intrusive.

The letter writers press her to reveal Sugar’s actual identity, which she dodges until late in the 80-minute performance. “When I took on ‘Sugar,’” she tells them, “I wrote the only way I know, and that is with radical sincerity and open arms. What has been most surprising is how much more you all gave back to me.”

“Sugar is not just me. We created something together,” she adds. “We are all ‘Sugar.’”

Bath, who has appeared frequently on Ensemble’s Over-the-Rhine stage as well as at other local theaters, is especially touching in a scene in the show’s final moments as a father grieving the tragic death of his 22-year-old son in a car accident. He enumerates more than 20 reasons why he’s struggled to write to Sugar. She responds in kind with her own numbered list, and Bath listens with sadness, surprise, and ultimately gratitude — all demonstrated mutely, just with facial expressions. Mengelkoch touches him on his shoulder as she concludes her response, the only time her character physically interacts with one of the writers. 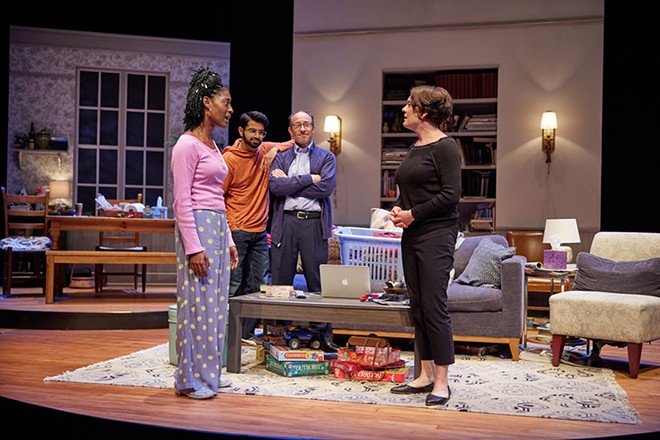 Director D. Lynn Meyers has kept this material from simply being recited letters and responses. She moves the performers fluidly around Brian c. Mehring’s detailed, lived-in set of four rooms on intersecting circular platforms: a kitchen table, a living room, a study with a desk, a cozy alcove.

None of these has a singular purpose; all four actors wander and circulate, sometimes converging on Sugar on the couch in the central living room (often arrayed with unfolded laundry), sometimes sitting on steps or at the table or desk. They don’t interact, but they — like Sugar — often pay close attention to one another and to Sugar. Mehring’s sets are, as always, enhanced by numerous details gathered and placed by properties curator, Shannon Rae Lutz, another ETC veteran (Mehring has created more than 100 designs for ETC).

Not all of Sugar’s exchanges with her letter writer are serious. Some evoke chuckles, including one about a “sexy Santa” and another about a middle-aged married man who has a crush on a friend. Sugar succinctly compares the object of the latter’s obsession to “a motorcycle with no one on it. Dazzling. Going nowhere.”

But most of Sugar’s responses are powerful and evocative, thoughtful responses to people who truly need some insights. Mengelkoch makes these interactions powerful by listening in a seriously focused way and then digging deep into her own life.

Much of the material in Tiny Beautiful Things is mature; there are discussions of child abuse, sexual abuse, assault, and drugs. These are not presented in a salacious way, but rather as deeply human pain that needs to be addressed. I suspect Cincinnati audiences seeing this moving production will find Sugar’s empathic advice on pain, loss, love and forgiveness is as powerful for them as for her correspondents.

Best Cincinnati Fringe Festival Shows to Catch Before Festival Ends, According to CityBeat's Theatre Critic: The festival concludes with a series of encore performances on June 18. 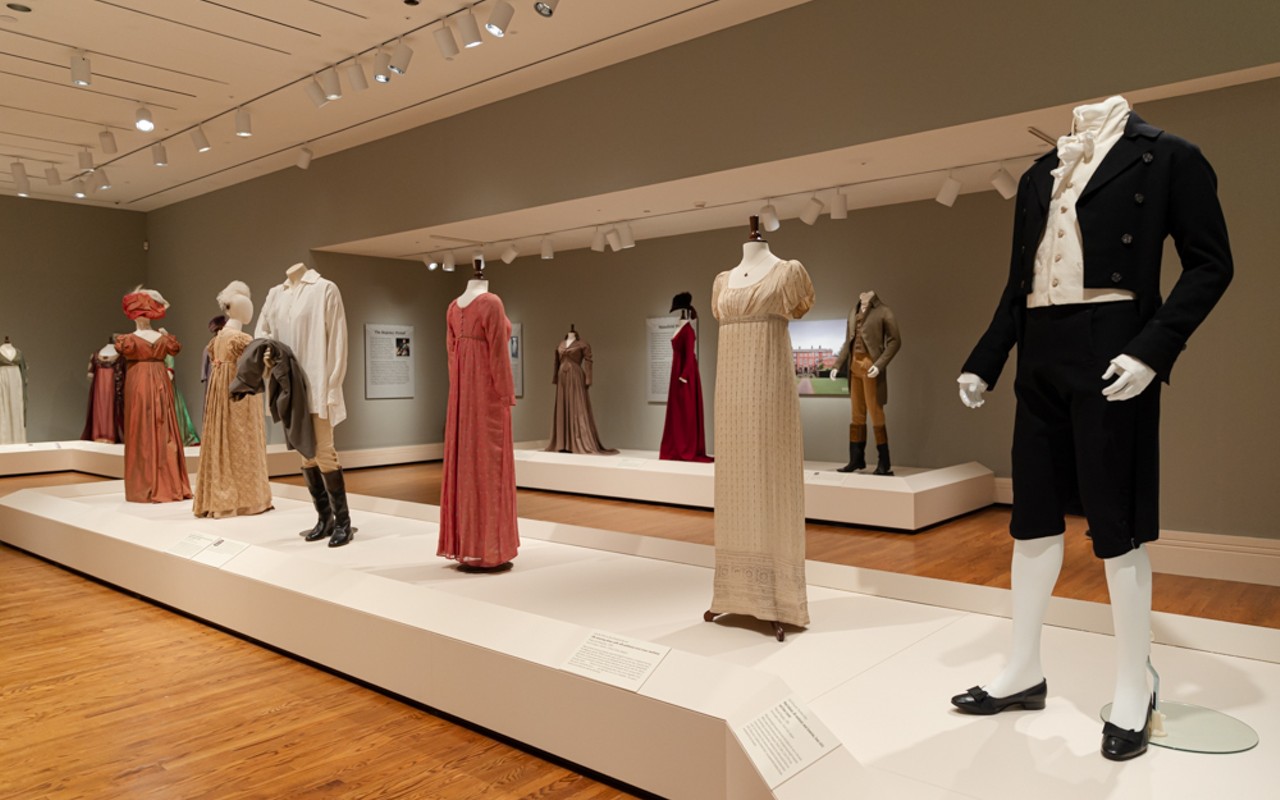