The zoo shared an adorable video on social media of the petite duo's first encounter. 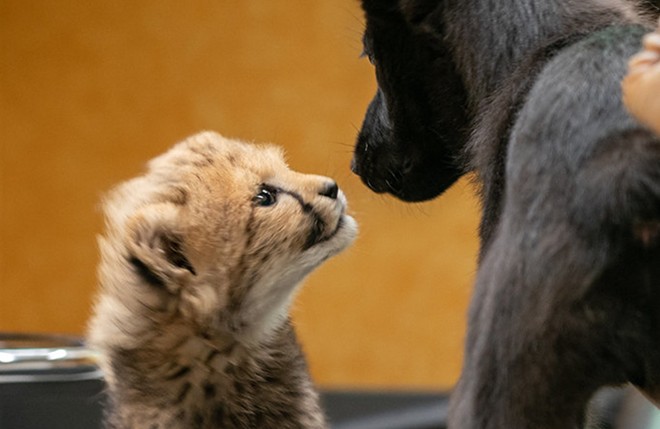 It wasn't necessarily a meet-cute, but it was a cute meeting when the Cincinnati Zoo & Botanical Garden's new cheetah cub Rozi was introduced to her puppy companion, Daisy.

In a caption, the zoo says: "It's not always love at first sight, so everything is done slowly over time. There will be many more play sessions to help the two get acclimated to each other! Eventually, the cheetah will see the puppy as a sibling."

Rozi arrived at the Cincinnati Zoo in May after being born as a single cub to a mother at Wildlife Safari in Oregon. According to the zoo, "When a single cub is born, the mom will not produce enough milk for it to survive. Knowing that the cub would need to be hand reared, the cheetah Species Survival Plan (SSP) identified Cincinnati Zoo as the best place for this cub to be raised."

Rozi, whose name means "rose" in Swahili, was paired with Daisy, a rescue puppy from Animal Rescue Fund, Inc. in Amelia, for both companionship and to learn the sort of life lessons siblings teach each other.

The zoo says there is about a month age difference between the two tots — Daisy is older than Rozi, who is about two months old — and that "the play sessions will get longer and longer as they start to get more acclimated to each other and eventually they will spend all their time together."

This is not the first time the zoo has paired a cheetah cub with a puppy companion. In fact, they've had six previous cheetah-puppy pairings, including, most recently, Kris and Remus.

Kris, a cheetah cub born in 2019, was partnered with a pup named Remus after the other cheetahs in Kris' litter died.


And Donni, another single cheetah cub, was paired with chocolate lab companion Moose in 2016.


Best picture ever of BFF's Donni & Moose! Moose the chocolate lab is Donni's companion. They have been together since they were around 3 months old since Donni was a single cub in need of a companion. pic.twitter.com/hJcGR62gML

On its website, the Cincinnati Zoo lists why they pair their cubs with puppies.

The main reason we pair cheetah ambassadors with a dog is for companionship. It gives the cheetah a surrogate “sibling” to grow up with and experience the world together. There is a lot of training that goes into shaping a successful cheetah ambassador. The dog helps with this as well. We start from a young age with the cheetah to teach it an acceptable way to interact with her trainers. ...Dogs can communicate with cheetahs in a way that we as humans simply cannot. As it turns out, dog play is pretty comparable to cheetah play.

Rozi is part of the zoo's Cat Ambassador Program and, when she's grown up, will join the other cheetah ambassadors and the zoo's Cheetah Encounter.  She is currently still being raised behind the scenes.